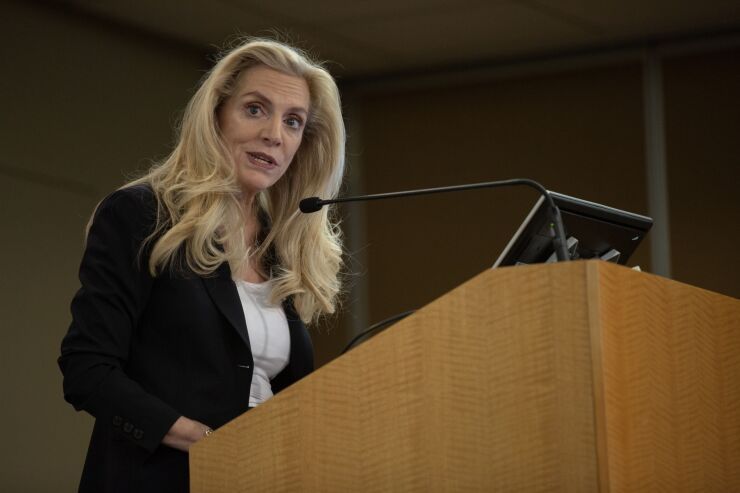 Federal Reserve Vice Chair Lael Brainard is a top contender to become the head of the White House’s National Economic Council, according to people familiar with the deliberations.

President Biden has not made a final decision on who will fill the role being vacated by Brian Deese, the people said, noting that interviews were still ongoing.

The president’s decision isn’t expected imminently, one of the people said. Deese, who has been in the role for two years, hasn’t given a firm date for his departure.

If Brainard is appointed, it would open a slot on the Fed’s seven-member board at a time when policymakers are debating how much more to raise interest rates. Biden would need to find a successor who could win the backing of the Senate.

That Brainard was a front-runner was first reported by The Washington Post.

The move comes as Biden prepares for a turnover of top aides. Chief of Staff Ron Klain is due to leave in the coming weeks and is set to be replaced by Jeff Zients, a former NEC director who also served as Biden’s COVID czar.

Cecilia Rouse, who leads the Council of Economic Advisers, is also planning on leaving shortly, which will mean Biden has to replace another top economic aide.

Treasury Secretary Janet Yellen — whose job Brainard was once a serious candidate for — also committed in a private December meeting with Biden to staying in her role, at least for now.

Fed Chair Jerome Powell and Brainard have led the Fed as it raised interest rates over the past year at the steepest pace in four decades to curb inflation that officials mistakenly thought would prove transitory.

While Brainard has been in sync with Powell on all of the Fed’s rate decisions, she has in recent months offered a public tone that was more mindful of the risks to economic growth from Fed tightening, or more favorable to the idea that inflation is coming down.

Inside the White House, Brainard is viewed as a person who could successfully implement the Inflation Reduction Act and the semiconductor funding in the bipartisan CHIPS and Science Act of 2022, both signature pieces of legislation that Biden is likely to promote in his bid for reelection.

In her most recent speech, Brainard, 61, said “even with the recent moderation, inflation remains high, and policy will need to be sufficiently restrictive for some time to make sure inflation returns to 2% on a sustained basis.”

Meantime, the council’s next head will advise Biden as the economy flirts with recession and a battle brews with Republicans over whether to raise the federal debt limit. Managing relations with China is also high on the White House’s agenda.

A Democrat, Brainard was also previously considered a possible successor to Powell. Biden instead tapped Powell for a second term, promoting Brainard at the same time to the central bank’s No. 2 role.

Brainard and Powell have similar views on monetary policy, but differ over bank regulation, with Brainard opposing at nearly every step Powell’s modest rollbacks of some of the tough curbs imposed on banks after the financial crisis. Her support for the Fed to do more to fight climate change has won her support among Democrats.

After steep rate increases last year, the Fed moderated the size of its moves to half a percentage point in December and is expected to downshift again to a quarter point when officials meet next week.

While Brainard has supported rate hikes since the Fed pivoted to fight inflation, she was earlier in the camp arguing that higher prices would be transitory and would fade as the pandemic eased.

That dovish stance, shared by Powell and others at the Fed, has since been acknowledged as a serious policy error.

Brainard was nominated as a Fed governor in 2014 by President Barack Obama. Before joining the central bank, she had served as undersecretary for international affairs at Obama’s Treasury. She was a deputy director of the NEC under President Bill Clinton and also served in his Treasury.

Between 2001 and 2009, she was a senior fellow and then a vice president at the Brookings Institution in Washington. She taught applied economics at the Massachusetts Institute of Technology in the early 1990s.

— With assistance from Saleha Mohsin, Josh Wingrove and Alister Bull.