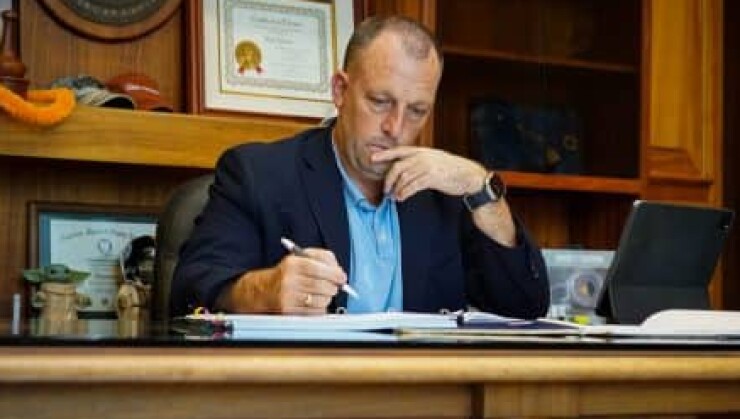 Hawaii lawmakers will debate a plan by Gov. Josh Green that could alter the state’s tax structure.

His proposal would shift some of the tax burden from middle-class Hawaiians to tourists, who fuel the state’s economy.

“Today, we need new ideas, new solutions — and bold action rooted in our shared values,” Green said Monday in his State of the State address. “Business as usual won’t work anymore — there is simply too much at stake to accept the status quo.”

Green campaigned on creating a climate impact fee of about $50 per tourist to raise $500 million to $600 million per year. Lawmakers have already introduced Senate Bill 304, a version of a tourism tax, which raises fees on visitors to state parks, including charging for parking.

House and Senate leaders kicked off the new session last Wednesday signaling their general support for visitors having to pay more to offset the impact of tourism on the state’s natural resources.

“Our residents have been clear. Visitors should be paying for their impact on our natural resources,” said Senate President Ron Kouchi in his opening floor speech. “When they are a guest in our house, they should treat our home like they would hope we treat their home when we visit.”

While the impact fee has been touted as a way to raise money to protect endangered species, it would also alleviate the potential budget hole from Green’s proposal to lower income taxes on the middle class. During his campaign, he said the money from that fee should be invested in protecting the environment and coping with climate change, and also to fund other initiatives, such as raising teacher pay and developing affordable housing and energy solutions.

“Each day without action means another family forced to move to the mainland, another child sleeping on the street, another local business closing, and another precious natural resource put at risk,” Green said. “We will continue to take bold action on providing affordable housing for working families, ending homelessness, protecting our environment, and doing everything in our power to make Hawaii more affordable for our people.”

Green’s proposals include a $500 educator tax credit, a $50 million grant-in-aid program to support non-profit and service providers, a climate impact fund of $100 million to fight climate change and invest in green infrastructure and conservation efforts, the return of over 363 acres to the Hawaiian Homes Commission, and an agreement with Haneda Airport to streamline travel, promote Hawaiian products and improve the Daniel K. Inouye Airport.

“This is an administration of action,” Green said. “We know that now is the time to invest in our people and our communities. If we don’t make critical investments in climate, housing, and education now, we will suffer collectively later.”

Kouchi said the challenges outlined by the governor in his speech are greater than what anyone individually can overcome. “So, governor you have the full support of the Senate as we go forward.”

He singled out Green’s goal to achieve 100% generation of power using renewable resources.

If the island of Kauai, which Kouchi represents, can generate 90% of its energy using renewable sources, the governor’s goal of 100% renewable energy sources is achievable, he said.

The Kauai Island Utility Cooperative uses a combination of hydroelectric power, solar and biomass to provide electricity to residents.

“I want to work with you Gov. Green, and your team to bring those kinds of numbers to the rest of the state,” Kouchi said.

Green is also proposing a $1 billion investment in housing.

The funds would be used to support major investments in the Hawaii Public Housing Authority to renovate and upgrade public housing units; to provide state rental subsidies to low-income families; and to boost financing for affordable housing units through the Hawaii Housing Finance and Development Corporation.

The Department of Business, Economic Development and Tourism says the state will require an additional 50,126 homes by 2025.

Green also announced a state of emergency around housing to help speed up construction by lessening construction regulations. Signing the declaration during his speech, Green said it will enable the state to build quickly 12 tiny-home villages for homeless people.

These projects, Green said, can be built faster than large-scale projects.

Kama’okū in Kalaeloa, which provided 37 tiny homes, a commercial kitchen, shared hygiene facilities and proximity to services for residents was built in six months under a similar proclamation, Green added. The emergency relief period would expire on March 20, unless terminated or superseded by separate proclamation.

He also prioritized the state’s Aloha Stadium project and a plan to replace the Oahu Community Correctional Center.

“We have already investigated a public-private partnership option,” Green said. “We are reviewing our options and working with colleagues. We can’t afford to wait, because the longer we delay, the higher the cost will be. We need to support this stadium and the plans for economic activity around it.”

“Our goal will be to secure the best deal for the state and get the projects moving forward as quickly as possible,” Green said.

Mortgage demand took a big step back last week, even after interest rates fell further
Salt Lake City, Dallas And Denver Are Expected To Have The Biggest Inventory Gains In 2023
Stocks making the biggest moves midday: Meta, Align Technology, Coinbase, Eli Lilly and more
Iron Condors: 101 What is it and How Does it Make You Money?
Hedge funds rush to unwind bets on falling markets as stocks surge