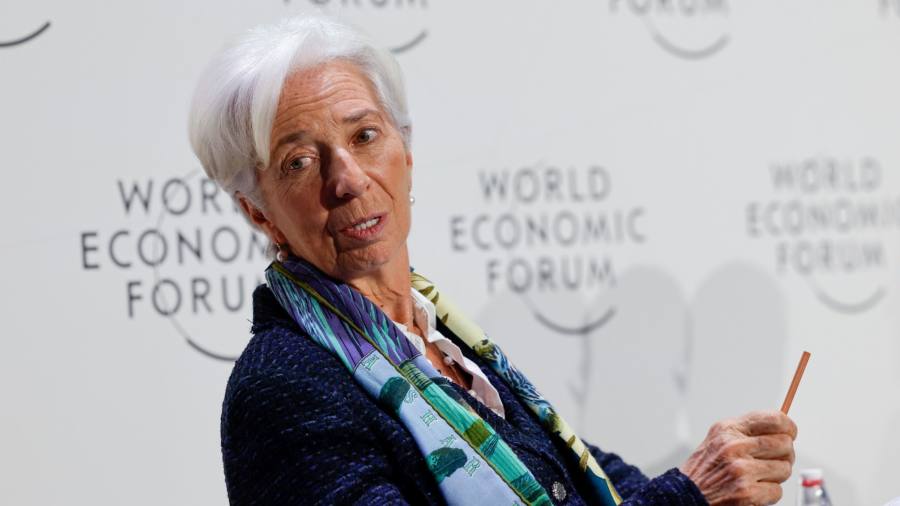 Christine Lagarde warned financial markets on Thursday that the European Central Bank was determined to “stay the course” and signalled further big interest rate rises lay ahead to get inflation down.

In comments that bolstered the euro, the ECB president told the World Economic Forum in Davos that markets should ditch their view that the central bank would soon slow down its rate rises in response to signs that eurozone inflation has peaked.

“I would invite [financial markets] to revise their position; they would be well advised to do so,” she told a panel.

Rate setters on the governing council next meet on February 2, when they are expected to raise the ECB’s benchmark deposit rate by 50 basis points to 2.5 per cent. Lagarde’s remarks raise the chances of another 50bp increase at the council’s following meeting in March.

Silvia Dall’Angelo, a senior economist at Federated Hermes, an investment manager, said: “In the short term, the ECB’s path is set and rates will increase further in coming months.”

The ECB raised interest rates by a total of 2.5 percentage points last year to combat a surge in prices in which inflation reached an all-time high of 10.6 per cent in October. However, eurozone rates remain lower than US and UK borrowing costs.

Markets increasingly think US interest rates are approaching their peak and that the Federal Reserve will shift from half-point to quarter-point rate rises in the coming months. Such expectations of smaller rate increases in the US have led to speculation that rate-setters elsewhere could follow suit.

However, Krishna Guha, of research firm Evercore ISI, said that the ECB was “earlier in the tightening cycle than the Fed” and that its “default path” was to continue with half-point moves at both the February and March meetings.

Lagarde added that headline, core and all other measures of inflation were still a concern at the central bank in Frankfurt. “Inflation, by all accounts, is way too high,” she said.

Headline inflation has fallen in recent months, but the core measure — which excludes movements in food and energy prices and is seen as a better measure of underlying price pressures — rose in the year to December to 5.2 per cent, from 5 per cent the previous month.

“It will take several months before core inflation eases to levels that make the ECB more comfortable,” said Frederik Ducrozet, economist at Pictet Wealth Management. “Virtually all ECB officials appear to be united in their fight against inflation, doves and hawks alike.”

Lagarde said interest rates would need to be “in restrictive territory” for long enough to ensure that inflation was brought back down to the bank’s target of 2 per cent in “a timely manner”.

Her comments came as Italian government bonds sold off during the day, with the yield on the country’s 10-year note rising 0.09 percentage points to 3.83 per cent. Bond yields move inversely to prices and tend to rise on expectations of higher interest rates.

The sell-off extended to other eurozone debt: the yield on the two-year German government bond rose earlier in the day, reaching 0.06 percentage points higher at 2.51 per cent by late morning.

The regional Stoxx Europe 600 fell 1.3 per cent, with all sectors in negative territory. Germany’s Dax and France’s Cac 40 both lost 1.4 per cent.

Lagarde added that the eurozone’s resilient jobs market could lead to higher wages.

“The job market in Europe has never been as vibrant as it is now,” she said. “The unemployment number is at rock bottom compared with what we’ve had in the last 20 years. And the participation rate, which matters as well, is also [at a] very, very high level and that is pretty much homogeneous throughout the euro area.”

The ECB head said she was pleased with improved signals from the eurozone economy. “The news has been much more positive over the past few weeks,” she said. “It will not be a brilliant year [in 2023], but a lot better than feared.”