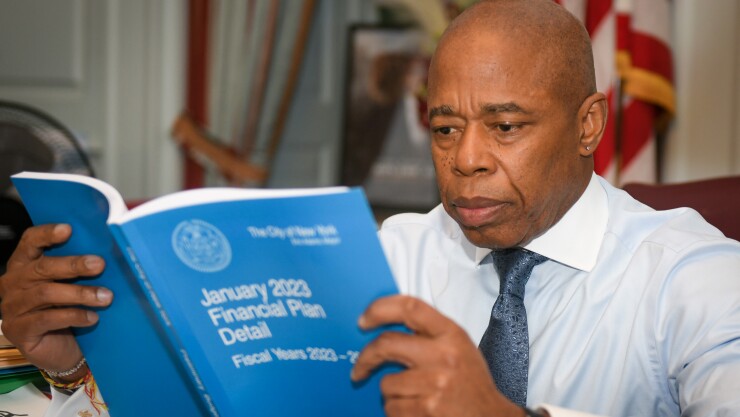 New York City’s $102.7 billion fiscal 2024 budget is balanced and maintains a record level of reserves while holding spending in check even as economic uncertainty casts a shadow over the city’s recovery from the COVID-19 pandemic. Still analysts bemoaned the lack of additional monies for the rainy-day fund, especially with potential budgetary challenges from remote work.

“I want to be clear. In order to keep moving forward while preserving the programs and services we value, we must be careful and make the best use of our resources,” Mayor Eric Adams said as he presented the preliminary budget proposal on Thursday.

“Since day one, fiscal discipline has been the hallmark of this administration … This budget protects funding for the essential services that continue to keep the city safe and clean, drive equity and affordability, and keep us on the path to prosperity,” Adams said.

The plan is up from the final $101 billion fiscal 2023 budget the mayor and council agreed upon last June, but is lower than the $104 billion in the revised plan put forth in the mayor’s November modification.

Some analysts applauded the budget, while others had reservations.

Howard Cure, director of municipal bond research at Evercore Wealth Management, said caution was the watchword in the budget.

“The overall tone of the budget is one of prudency, which is correct during this current period where federal pandemic aid is winding down and there are questions about whether we enter into a recession and the impact on sales and income taxes,” Cure told The Bond Buyer. “This is compounded by the city’s unemployment rate that is still above the national average driven by the arts, entertainment, food and hospitality sectors.”

“Last year’s record deposit into the city’s long-term reserves will buoy services in a downturn, but we do not yet have enough reserves to navigate us through a recession,” city comptroller Brad Lander said in a statement.

“Given better-than-anticipated revenue, New York City had a chance to set aside additional funds in reserves, but missed the opportunity to do so in its preliminary budget and four-year financial plan, even as it faces substantial fiscal and economic uncertainties,” DiNapoli said in a statement.

“It maintains the $1.8 billion in the fiscal year 2023 general and capital stabilization reserves,” Rein said. “This is prudent given the myriad risks, including $1 billion in fiscal year 2023 reported spending on migrants for which federal funding has not yet been secured. Still, sufficient funds should be available to deposit $1 billion to the rainy day fund.”

“Adding needed programs is fine. But if we experience a hard recession instead of a shallow one, all expenses will need to be reconsidered. If return to office [RTO] does not accelerate there will be more pressure on the property tax and mass transit,” he said. “Financial flexibility is key. Reserves may be drawn down quickly. The quarterly program to eliminate the gap [PEG] process will be even more important in the days ahead. At this point, the good news is the economy is holding up well.”

Cure agreed that RTO was an important consideration.

“A bigger economic concern, especially in the budget forecast beyond fiscal year 2024, is the impact of the pandemic on the commercial real estate market,” he said. “As long-term office leases expire, will companies renegotiate for smaller office space due to more employees being allowed to work remotely? Is there a new and higher norm for office vacancies and what impact does that have on property assessments and, ultimately, property tax revenues (the single largest source of city revenue) and the budget?”

The next step in the process is the 51-member City Council will hold a series of public hearings on the preliminary budget through March.

The mayor will release his revised executive budget by the end of April; the council will issue its response and then hold a second round of hearings in May, after which they will negotiate adjustments with the mayor and the Office of Management and Budget. By law, the council must vote on a balanced budget by July 1.

“The mayor is proposing eliminating over 8,600 vacant positions, although that still leaves 23,000 positions open to hire for critical positions,” Cure said. “To maintain critical services, the city needs to be more nimble in filling vacant positions by simplifying its bureaucratic hiring process while dealing in a still-tough job market, where the private sector and other public-sector jobs provide better pay and/or more work from home flexibility.”

Cure noted negotiations would be key.

“An important issue is gaining the cooperation of the city council for this more austere budget,” he said. “The council has already expressed concerns in making funding cuts in areas such as libraries, CUNY, social services and early childhood education.”

“Will the mayor and city council show discipline in maintaining the rainy-day fund or will they resort to making withdrawals to preserve programs even though, for fiscal 2024, there are still federal monies available?” he asked.

The city has the wherwithal to supplement the rainy-day fund now, but it “does not have a published policy defining the purpose of its rainy-day fund, the target level of reserves or how resources would be replenished after a drawdown. Withdrawals are subject to simple majority approval.”

The Council wasn’t happy about parts of the proposal.

They said Adams must create “a constructive partnership with this council.”

“We will not allow our city to be damaged by the undermining of city agencies and services that meet the essential needs of all New Yorkers,” they said. “We are committed to delivering for New Yorkers, and we are prepared to fight to realize our vision in this year’s budget.”

“Rather than making investments upstream as that plan envisioned, this budget meanders with little direction,” he said.

“Key areas remain under budgeted, including police overtime, housing vouchers, and likely increases in labor costs, which will swell already projected out-year budget gaps,” Lander said. “The mayor appropriately asked agencies to find savings opportunities, yet sweeping cuts to vacant positions may come at the cost of hiring in mission-critical functions. Responsible budgeting for NYC’s future does not mean cutting services that New Yorkers rely on.”

Cure noted with the majority of municipal labor contracts expiring, the city budget only set aside 1.25% for raises.

“The expectation is for raises to be greater, given staffing shortages, the current inflation rate and the fact that many city employees took risks doing their job at the height of the pandemic,” he said.

The city is one of the biggest issuers of municipal bonds in the nation. In the fourth quarter of fiscal 2022, it had about $38.8 billion of general obligation bonds outstanding. That doesn’t include various agency debt, such as the TFA or the Municipal Water Finance Authority, which have $44 billion and $32 billion outstanding, respectively.

Cure noted the city is still somewhat dependent on the financial services industry for revenues.

“The expectation is for bonuses to be well below the prior year,” he said, which will hit income tax collections.

“On top of a slowing national and local economy, we face fiscal challenges, new and unfunded needs. The arrival of nearly 40,000 asylum seekers created an unexpected cost of more than $1 billion this fiscal year,” Adams said. “We’re conducting a new analysis to determine an updated estimate given the influx of asylum seekers we’ve seen in recent weeks.”

While Adams said he was grateful that the federal government had already allocated some funding to help the city cover a portion of these expenses, it won’t come close to covering what was needed.

“New Yorkers will be left footing the bill now and in the future,” Adams said. “We continue to push for relief from the state and the federal governments so that we can avoid straining our budget and our capacity to provide city services for everyday New Yorkers.”

Lander agreed the state and federal governments should help out with the recent influx of migrants.

“One area where I wholeheartedly join the mayor is in calling on the state and federal governments to take on their share of the cost for the services and shelter for newly arrived asylum seekers — something they both have failed to do thus far,” Lander said. “This city has long been a beacon of hope for immigrant families and has prospered from their contributions, but we need state and federal aid to help them land on their feet.”

City officials are hopeful the state will provide financial help both in dealing with the recent arrival of asylum seekers and with funding for its growing educational needs.