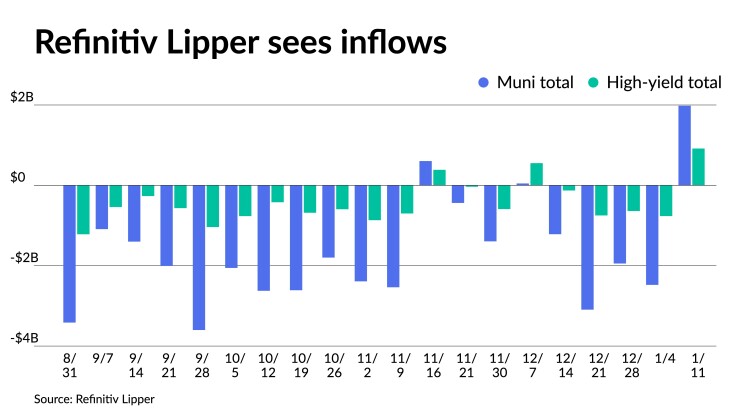 Even though he remains cautious ahead of potential interest rate changes, the current market is proving fruitful for those interested in higher returns and protection from rate volatility.

“The jump in yields witnessed last year puts investors on much better footing for the coming year,” he said.

“The extra yield is not only an attractive source of tax-exempt income but provides a much bigger buffer against potential price declines” should interest rates go up, he said.

Inflows returned as Refinitiv Lipper reported $1.981 billion was added to municipal bond mutual funds in the week ending Wednesday after $2.477 billion of outflows the week prior.

“The muni market entered 2023 on the expensive side relative to Treasuries as evidenced by some of the lowest muni-to-Treasury yield ratios of the past 12 months,” he said.

In a “historically difficult” year, municipals outperformed relative to most taxable bonds in 2022, according to Valeri, who said he doesn’t expect to see much change in the valuations over the near term given reinvestment needs and tight supply.

“Both taxable and tax-exempt markets have been supported in recent weeks and months by expectations of a Fed pivot — a halting of rate hikes with a shift to rate cuts later in 2023,” Valeri said.

He called those expectations “premature.”

Should inflation remain stubborn, Valeri said, “the rate cuts priced into the market and reflected by lower yields of the last few weeks may disappear, which would put price pressure on municipal bonds.”

Benchmark gains “have a main muni index up nearly 2% this month, tracking a UST index but lagging a U.S. corporate index by 100 basis points,” she said, noting the “growing prevalence of 3s and 4s among bid lists and secondary offer situations.”

“A sale of PSF (Aa2/NR) Mansfield, Texas, Independent School 3s due 2036 at 3.59% came with a spread of +75/MMD, or about 50 basis points through its evaluated price at the market lows from late October,” she said.

“Part of the newfound push to lower yields and spreads is a piggyback move on the broader inflation-is-easing theme,” she said, “but specific to munis it’s also a function of a still-limited calendar which has to reach a typical $6 billion or higher weekly figure.”

Current levels, she said, “suggest relative value has faded in the first third of the curve,” but valuable ratios are still in play.

When the pandemic started in 2020, she said, “there was a brief period when rates spiked on uncertain economic fallout with lockdowns.”

During the month, daily bid were at $1.7 billion and secondary trades reached $14 billion daily, each around 20% higher than the daily average for the year.

She said current levels have “removed value on the short end (more demand than supply can offer) but past five years TEYs remain favorable.” Both the 10- and 20-year MMD 5% spots offer “TEYs not that far off the October highs,” she said.

For additional value, she noted, “buyers have become re-enamored with lower coupon bonds where TEYs are boosted by 100 basis points or more.” Local Texas issuance, for instance, “in the 20-yeaer range offered yields near 4% for TEYs exceeding 6%,” Olsan said.

CPI comes in line with expectations
December’s consumer price index showed inflation softer than November, with the headline number down 0.1% in the month, but up 6.5% year-over-year, the smallest gain since October 2021 and down from 7.1% in November.

Inflation, he said, “isn’t broadly coming down, but it is cooling as the economy starts to feel the impact of the Fed’s earlier rate hikes.”

“The market had priced in a very optimistic scenario about CPI in the previous days,” said Maria Vassalou, Co-Chief Investment Officer of Multi-Asset Solutions at Goldman Sachs Asset Management. “The numbers came in at exactly the expectations level. That means that some of the optimism in the markets may get unwound both in equities and fixed income.”

Consumer inflation “is clearly moderating from the 2022 peaks,” said Scott Anderson, chief economist at Bank of the West, “but the outsized impact of large one-off price declines in categories like gasoline, used cars, and airfares in December, suggest consumer inflation will likely accelerate a bit on an annualized basis in the first quarter of 2023, even as year-on-year inflation continues to moderate.”

“U.S. inflation shows price pressures are easing, yet in an environment of a strong jobs market, the Federal Reserve will be wary of calling the top in interest rates,” said James Knightley, ING chief international economist.

“There have been head fakes on inflation before, to no avail, and there is a wide range of inflation outcomes between the peaks seen last summer and the central bank’s 2% inflation target,” House and Pugliese said. “Eventually the goods price deflation will cease, and labor cost growth continues to run in excess of what Fed officials believe is consistent with 2% inflation.”

“December marked a third consecutive month of softer inflation data, which will likely tilt the Fed towards our call of a 25bp rate hike” at its February FOMC meeting, said Mickey Levy and Mahmoud Abu Ghzalah of Berenberg Capital Markets.

House and Pugliese said the report “ups the chance that the FOMC will hike the fed funds rate by just 25 bps at its next meeting, but with the trend in inflation still above target, we expect that even if the FOMC delivers a downshift in pace, it will continue tightening past its next meeting.”

CPI offers “confirmation that the downshift in inflation pressures is becoming entrenched, setting the stage for another reduction in the pace of rate hikes at the upcoming February FOMC,” said Morgan Stanley Researchers.

Fed speakers, they noted, “have signaled to a preference for a step down to 25bp increments as the end of the tightening cycle comes closer.”

While the December FOMC’s SEP points to a higher peak rate, Morgan Stanley Researchers “continue to expect only one final 25bp rate hike before a pause and an eventual first rate cut in December.”

“The inflation data look consistent with our call, and more slowing in the two payrolls reports between now and the March meeting should move the Fed to an earlier end of tightening,” they said.

And while the quarter-point hike is the likely outcome of the coming meeting, “the strength of housing in the core CPI and the benign jobless claims support the scenario of a 50bps hike,” said Vassalou.