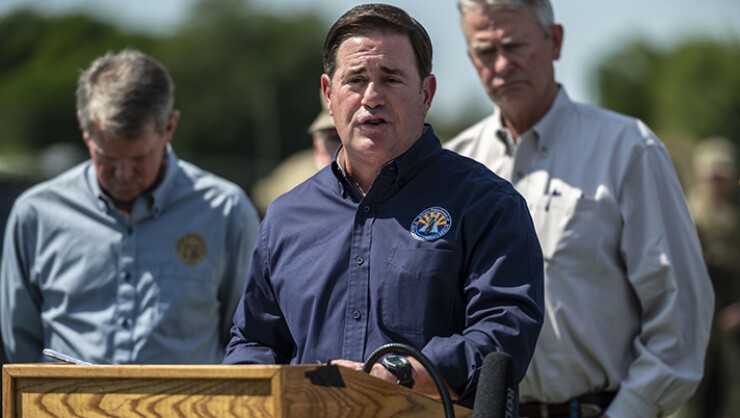 A federal judge’s dismissal of former Arizona Gov. Doug Ducey’s lawsuit challenging the Biden administration’s request that the state stop spending federal relief money on schools that do not have mask mandates won’t impact the state’s other litigation related to clawbacks of relief money used for tax cuts.

The move follows Ducey’s motion for dismissal, filed on Dec. 23, 2022 and was dismissed only a matter of days after Ducey left office and was replaced by the newly sworn in Arizona Gov. Katie Hobbs.

Ducey’s motion for dismissal may have come as a result of his scheduled departure from office, said Joseph Bishop-Henchman, executive vice president at the National Taxpayers Union Foundation.

“It’s kind of backwards looking as to whether Arizona did what it was supposed to do or not in the height of the pandemic,” Bishop-Henchman said. “It may just be considered a dated issue at this point and not one that’s likely to recur.”

The case was initially dismissed by District Judge Steven P. Logan in July 2022 with Ducey quickly filing his appeal thereafter.

In Logan’s dismissal, he concluded it was reasonable for the Biden administration to say that money couldn’t be spent on efforts to undermine compliance with COVID-19 prevention guidelines. He added that a program requiring noncompliance with guidelines may worsen the pandemic and create more negative effects, which runs contrary to the purpose of the relief fund.

But this dismissal won’t affect the state’s other lawsuit against the Biden administration’s clawback of pandemic relief funds for state tax cuts, Bishop-Henchman said.

The District Court ruled against Arizona on jurisdiction in that case but the Ninth Circuit Court of Appeals reversed it in May 2022, sending it back to the district judge to consider the merits. That case has now been briefed and either oral arguments or a decision by the judge is expected soon.

“It’s always been the case that if the federal government gives money to a state and imposes a condition on it and a state thinks the condition is unconstitutionally burdensome, they can be heard in court on that,” said Bishop-Henchman. “And that’s what the Arizona Trial Court ruled in the tax case of ARPA and was reversed by the Ninth Circuit.”

This case is also notable for the many other states who’ve filed similar lawsuits, including Ohio, Kentucky and Tennessee, who all recently dealt a major blow to Treasury in having a Sixth Circuit Court of Appeals Judge conclude that relevant provisions of ARPA are unconstitutional.