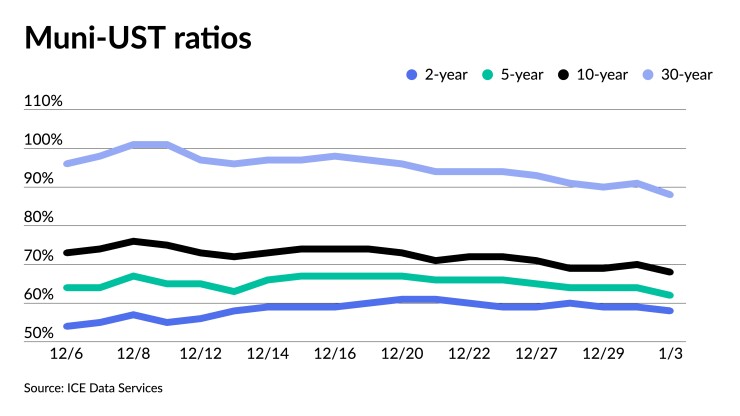 Municipals were firmer in spots to kick off the new year’s trading on Tuesday, underperforming a U.S. Treasury rally out long. Equities ended down.

Triple-A benchmark yields were bumped up to seven basis points, depending on the scale, while U.S. Treasury yields fell 10 to 12 basis points 10 years and out.

Secondary trading for the last week of the year totaled $22.9 billion as “many took the final week off. 2022 was a very volatile year with a high volume of secondary trading due to the rise of rates as well as the lack of supply this year,” said Jason Wong, vice president of municipals at AmeriVet Securities. Clients’ bids-wanted were also down for the week, with just $3.35 billion put up for the bid.

“2022 has been a really difficult year as we have seen yields rise by an average of almost 200 basis points,” he said.

For the last week of the year, the muni curve steepened by two basis points to 95 basis points. At the beginning of 2022 the curve was at 80.1 basis points.

Outflows continued last week as investors pulled about $1.9 billion out of muni mutual funds after the prior week’s outflow of $3.1 billion, according to Refinitiv Lipper.

Mutual funds have seen “record numbers of outflows that have totaled to well over $120 billion for the year, which has erased the strong inflows we saw back in 2021,” he said.

“There is no denying that 2022 was rife with volatility of historic proportions thanks to the Fed[eral Reserve]’s aggressive and unprecedented tightening sequence specifically orchestrated to break the grip of the highest inflation levels in 40 years,” said Jeff Lipton, managing director of credit research at Oppenheimer Inc.

“This stance has seemed to be working as inflation has slowly come down and the [Federal Open Market Committee meeting] back in December opted to hike rates to 50 basis points after four consecutive 75 basis point rate hikes,” Wong noted.

But while market volatility has not disappeared, Lipton thinks “munis are well-poised to add investment opportunities moving into 2023.” Furthermore, he noted, “overall liquidity in the muni market has not been as thin as the liquidity experienced in other areas of fixed income.”

The muni market, he said, “is being teed up to enter 2023 from a relative position of strength.”

“Munis were on pace to be even lower back in October but a November rally helped munis climb out of the hole,” Wong said.

And while muni performance ended 2022 in the red due “to rising bond yields and accompanying price erosion, the attractive cash flows have created a strong ‘carry’ component to performance, providing an offset to the principal losses as well as defensive attributes ahead of a potential recession,” Lipton said.

This will likely extend into 2023, although he expects “far less price erosion and perhaps there may be opportunities to experience some price appreciation.”

Bond yields are not likely to drop as quickly as they have advanced.

“We have checked many of the ‘bullish’ boxes in favor of tax-exempt investment opportunities including credit standing, a likely peak (or close to) in bond yields, relative value, attractive cash flows, portfolio diversification and defensive attributes,” he said.

Altogether, this should take “muni performance out of the red and set up 2023 for positive returns … in the mid-single digits,” Lipton noted.

Munis, he said, “have historically outperformed high-grade debt instruments during periods of rising interest rates and 2022 has followed this trend with tax-exempts outperforming UST and corporate securities for the year.”

November was a “good month for fixed income performance as the bond markets seemingly found peace with Fed policy and the directional path of inflation,” he said. But despite fixed income displaying “positive returns month-to-date leading into the Christmas holiday weekend,” Lipton said, “December came in with a quick return to a negative bias to end the month with losses across most fixed-income cohorts as munis managed to end the month in the green.”

If not for constructive technical conditions in the muni market, he said, “the performance gap between UST and munis would have likely been much tighter.”

The extended run-up in muni bond prices helped lessen year-to-date double-digit negative returns, “but thanks to the tax-exempt sell-off during the final days of the year, seen as playing catch up to advancing Treasury yields, single-digit annualized muni losses were not able to recede further,” he said.

“Sustained favorable technicals throughout much of 2023 should be accretive to performance and munis can be expected to outperform UST with ‘net negative supply’ potentially extending this out-performance and given what we expect to be a march to higher rates as tighter monetary policy defines the first half of the year,” Lipton said.

“It will be hard to say what 2023 will bring us, but with the Fed saying there will be a few more rate hikes in 2023, this could bring some opportunity to investors as volatility has slowed and coupled with attractive yields, we should see a brighter 2023,” Wong said.