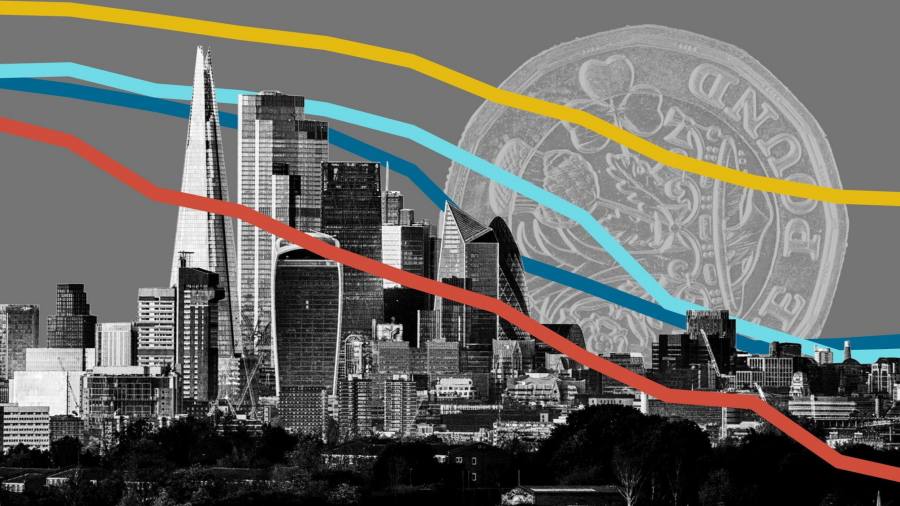 The UK will face one of the worst recessions and weakest recoveries in the G7 in the coming year, as households pay a heavy price for the government’s policy failings, economists say.

A clear majority of the 101 respondents in the FT’s annual poll of leading UK-based economists said the inflationary shock caused by the pandemic and the Ukraine war would persist for longer in the UK than elsewhere, forcing the Bank of England to keep interest rates high and the government to run a tight fiscal policy.

More than four-fifths expected the UK to lag its peers, with GDP already shrinking and set to do so for much or all of 2023.

The result is expected to be an intensifying squeeze on household incomes, as higher borrowing costs add to the pain already caused by soaring food and energy prices.

“The 2023 recession will feel much worse than the economic impact of the pandemic,” said John Philpott, an independent labour market economist. Others described the outlook for consumers — especially those on low incomes or mortgage deals that were set to expire — as “tough”, “bleak”, “grim”, “miserable” and “terrible”.

“The combination of falling real wages, tight financial conditions and a housing market correction are as bad as it gets,” said Kallum Pickering, senior economist at Berenberg bank.

The UK is not alone in facing these challenges: Kristalina Georgieva, the IMF managing director, warned at the weekend that a third of the global economy and half of the EU would be hit by recession this year.

Most economists said the economy would at least return to growth by the end of the year as inflation ebbs, with Paul Dales, at the consultancy Capital Economics, asserting: “2024 will be much better than 2023.”

But Britain’s downturn looks set to be both deeper and more prolonged. Forecasts compiled by Consensus Economics show UK GDP shrinking by 1 per cent in 2023, compared with a contraction of just 0.1 per cent for the eurozone as a whole and growth of 0.25 per cent in the US.

The UK is unusually exposed to the global surge in energy prices and interest rates — with a reliance on gas that is not matched by storage capacity, and a high proportion of mortgage obliged to renew fixed-rate deals in any given year.

The UK is also unusual in the extent to which its workforce has shrunk since the pandemic. Charlie Bean, a former BOE chief economist, said high inflation was likely to be more persistent in the UK than elsewhere, because its labour market was “unsustainably tight even in the absence of the Ukraine shock”. Anna Leach, deputy chief economist at the CBI, said this would “continue to apply a brake to growth for companies, drive industrial unrest and push up domestically-generated inflation”.

“The UK suffers from an energy shock as bad as Europe’s, an inflation problem . . . as bad as the US and a unique problem of lack of labour supply from the combination of Brexit and the NHS crisis,” said Ricardo Reis, a professor at the London School of Economics.

But even once the recovery was under way, most said Britain would continue to lag because of fundamental problems that policy mistakes had made worse — poor productivity, weak business investment, government neglect of public services and the damage to trade done by Brexit.

“The UK is in a structural hole, not a cyclical downturn,” said Diane Coyle, professor at Cambridge university, who saw little prospect of an improvement in living standards “unless some sanity returns to our trade relations with the EU” and “until we have a government with an adequately long-term economic strategy it can get through parliament”.

Many saw similarities with the policy missteps and industrial conflict of 1970s and said the recovery, once it began, would be a feeble one, unfolding “in the long shadow of Brexit” and in the absence of any plan to boost long-term growth.

More than a quarter of respondents said Brexit would be a continuing drag on growth, with Jonathan Portes, professor of economics and public policy at King’s College, London, calling it a “slow puncture for the UK economy”. Several said its corrosive effects would become increasingly clear to voters.

“When they visit the EU on holiday, they will be surprised at how unable they are to afford things that they used to be able to,” said John Llewellyn, partner at the advisory group Independent Economics.

A significant minority said the UK was suffering from ministers’ outright incompetence.

“By now, the economy is in much deeper trouble than it needed to be if it had been competently managed,” said Panicos Demetriades, a former governor of the Cypriot central bank, calling the UK “the ‘sick man’ of the G7”.

Stephen King, senior economic adviser at HSBC, pointed to the “painful need to restore fiscal credibility in the light of the Truss/Kwarteng fiasco” and Ray Barrell, honorary professor of economics at Brunel university, said encouraging public sector strikes looked like “the last bid for middle-class votes by a failing government”.

But while economists agreed on the UK’s bleak prospects, there was no consensus on what policymakers should do about it in the short term.

The Bank of England has warned that interest rates will probably need to rise again in 2023 to return inflation to the 2 per cent target, but by how much, or for how long, is less clear.

Jagjit Chadha, director of the National Institute for Economic and Social Research, said that with inflation set to fall rapidly from mid 2023, a “gradual” increase should be enough to hit the target in 2024, with “no need to jump in rapid steps to something much higher than 4 per cent”.

Some fear the central bank could go too far. Kitty Ussher, chief economist at the Institute of Directors, said that because it took time for higher interest rates to take effect, people would not “fully believe that inflation is falling” until mid 2023. This could make the BOE feel “under pressure to keep taking action, running the risk of . . . an unnecessarily harsh recession”.

Others warned that even if headline inflation fell rapidly, it would be a “slow grind” to reach the 2 per cent target. “The Bank will need to be tough to dampen core inflation,” said Jessica Hinds, economist at Fitch Ratings.

With elections approaching, the government will not want to raise taxes again after the massive fiscal consolidation announced in October.

Some respondents felt this made big tax changes in 2023 unlikely, arguing that chancellor Jeremy Hunt had done enough to placate markets. “Its own fiscal rules are in no way constraining,” said Vicky Pryce, chief economic adviser at CEBR, while Yael Selfin, chief economist at KPMG, called it “counterproductive to increase the tax burden during a recession”.

But others said even a small downgrade to the relatively optimistic forecasts of the Office for Budget Responsibility, the fiscal watchdog, could force the chancellor to reconsider, as it would erase his headroom against the target to set debt on a falling path as a percentage of GDP.

The bigger question, say the economists, is whether the government can resist the growing pressure to raise public sector pay, given the spate of strike action, and prop up crumbling public services.

“It’s likely that the government will eventually cave into public sector wage demands, in which case tax rises are inevitable,” said Martin Ellison, professor of economics at Oxford university.

Despite deep gloom over the UK’s long-term prospects, some respondents found silver linings. Silvia Ardagna, economist at Barclays, noted that unemployment was likely to stay low despite the recession, with employers hoarding labour after their recent struggles to recruit.

Bronwyn Curtis, a non-executive director at the OBR, was optimistic “that alternatives to Russian gas will accelerate”, while financial pressures could prompt labour market dropouts to return.

Meanwhile, Susannah Streeter, an analyst at Hargreaves Lansdown, saw “tentative signs of greater co-operation with Europe”, while Ussher said that from spring onwards, there would be “a fillip to sentiment” from heating being turned off and benefits uprated in line with inflation.

But despite these glimmers of hope, few expect the UK to lay the foundations for long-term growth in the year ahead. Ian Plenderleith, a former MPC rate-setter, said the recovery would look less like the emergence of green shoots, and more like “a bit of scrubland”.

Richard Davies, director of the Economics Observatory and a former Treasury adviser, predicted that even once inflation had receded, prices would remain high and households would be under intense pressure.

He added: “The real roots of prosperity come from productivity rising consistently. I am less optimistic here.”