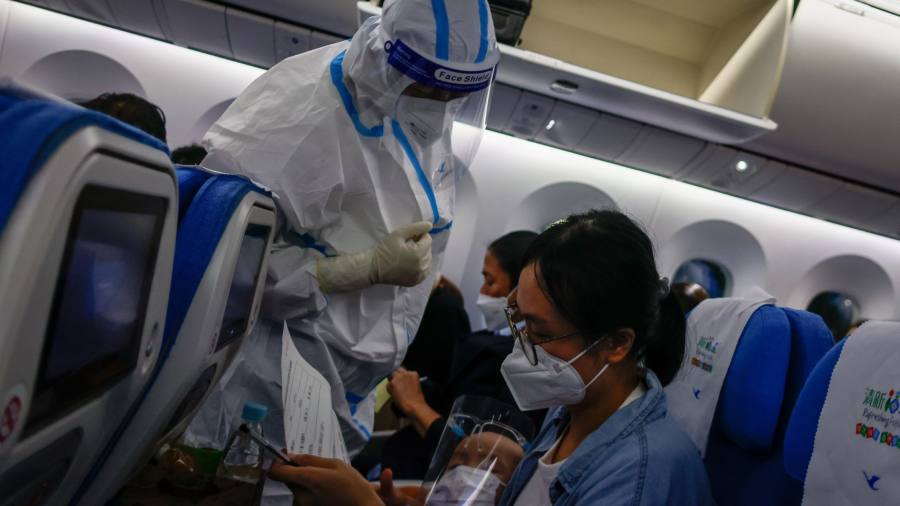 China will remove quarantine requirements for inbound travellers from January 8 as the country dismantles the remnants of a zero-Covid regime that closed it off from the rest of the world for almost three years.

The National Health Commission on Monday unveiled the move as part of a wider announcement that downgraded the country’s management of Covid-19 and definitively abandoned a host of other preventive measures.

The NHC said that more than 90 per cent of cases of the Omicron variant were “mild or asymptomatic”, part of a shift in tone towards coronavirus as it rages across a country where until recently very few of the 1.4bn population had contracted it.

The government, which this month also scrapped the requirement for positive cases to quarantine at central facilities, is now battling a severe winter outbreak with estimated cases spiralling into the hundreds of millions and health services under pressure.

Models have estimated the virus could lead to close to 1mn deaths, though China’s public data has ceased to reflect the situation on the ground and other zero-Covid rules such as mass testing have largely ended.

Chinese equities led rises across the Asia-Pacific region on Tuesday following the announcement, with the CSI 300 of Shanghai- and Shenzhen-listed stocks climbing 1.2 per cent. Hong Kong’s exchange was closed.

China pursued a strict zero-Covid policy shortly after the pandemic first emerged, locking down many of its largest cities and imposing quarantine requirements on foreign arrivals as part of an attempt to eliminate the virus within its borders.

Late this year, the policy began to unravel as authorities struggled to contain outbreaks in numerous cities, including the capital Beijing. Protesters took to the streets in November in a rare display of defiance against the central government’s approach, which was dramatically relaxed shortly afterwards.

Monday’s announcement signalled the end of the zero-Covid system that transformed China’s relationship with the outside world, and which for long periods successfully limited the transmission of a virus that had swept through every other advanced economy.

At one point this year, the quarantine rule required travellers to spend three weeks in a hotel room. The current policy of five days at a hotel followed by three days at home will end on January 8. Arrivals will still be required to have a negative Covid test result within 48 hours of departure and to wear masks on flights.

The sudden removal of restrictions has already put immense pressure on China’s healthcare system, especially in Beijing, which was one of the centres of the outbreak prior to the policy’s abandonment and was thought to be one of the best-prepared cities.

Recent economic data has highlighted the costs of the policy. Retail sales, a gauge of consumer spending, fell by 5.9 per cent year on year in November, worse than analyst expectations, while the economy is set to miss an annual 5.5 per cent growth target that was already its lowest in decades.

But analysts have also warned over the economic and corporate costs of the virus itself as it sweeps the country, with Apple among those vulnerable to further supply chain issues.

Under zero-Covid, citizens in China were required to test every few days at booths across major cities and scan a code on their phones to enter buildings. Such practices have largely disappeared as cases multiplied rapidly, though as recently as late November individuals in Shanghai were still being taken to central quarantine because they were close contacts of positive cases at bars.