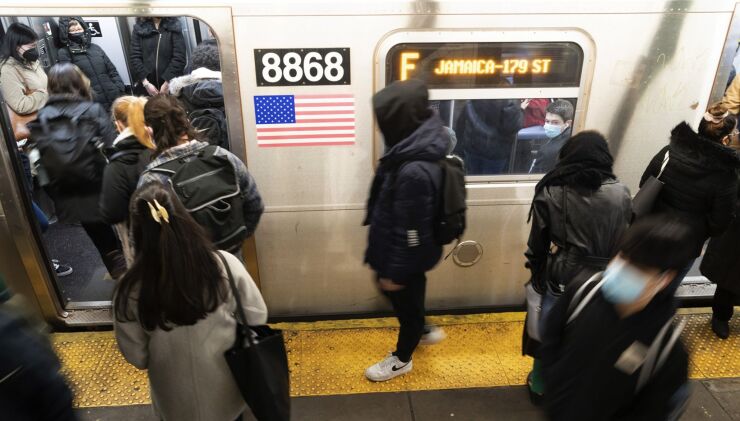 The New York Metropolitan Transportation Authority Board approved a $19.2 billion budget for 2023 and a four-year financial plan. The budget includes a 5.5% fare increase for next year and envisions a 4% increase in 2025.

“I’ve been talking about the financial crisis facing the MTA for many months,” MTA Chair and CEO Janno Lieber said Wednesday. “The MTA’s plan balances the budget, while also preserving flexibility as to how we get there — with the help and financial support of Washington, Albany and City Hall. Mass transit for New Yorkers is like air and water — we need it to survive.”

The MTA’s four-year financial plan contains what the agency considers its roadmap for longer-term fiscal stability, with safeguards for essential services and a foundation for the region’s continued economic growth.

The plan proposed by the MTA last month followed recommendations in the July financial plan, which outlined actions to shrink the agency’s structural deficit from $2.6 billion to $600 million in 2023 and from $3 billion in 2024 and 2025 to $1.2 billion.

Beginning next year, the MTA will work to implement operating efficiencies estimated to yield $100 million in savings in 2023, rising to $416 million by 2026.

“The budget assumes the restoration of recurring biannual fare and toll increases, with 5.5% assumed in 2023,” the MTA said in a statement. “A board/staff fare and toll strategies working group will develop plans for fare and toll changes before the MTA board takes additional action.”

In addition, the proposed budget also assumes $600 million in additional dedicated funding in 2023 and projects a need of $1.2 billion per year in recurring new revenue beginning in 2024.

The MTA warned that if the state, city or federal government don’t provide additional financial support, it will be necessary to take other actions, such as service cuts, staff reductions, higher fare increases or the cancellation of capital projects.

“The ridership trends that have emerged post-COVID have created a fiscal cliff higher and earlier than previously anticipated,” MTA Chief Financial Officer Kevin Willens said. “The much-needed federal aid the MTA received from three COVID-relief packages has enabled a reduction in deficits in the immediate future. However, beginning in 2023, we need new dedicated revenue streams to ensure that essential transit service remains at the levels riders expect.”

By law, the MTA must submit a balanced budget by year end, the end of its fiscal year.

“Using as-yet unspecified means to close the budget gap allows the MTA to put off answering tough questions until its February budget update,” DiNapoli said. “It also shows the uncertainties that cloud larger budget gaps in the outyears, which my office has repeatedly raised. Transit ridership remains well below pre-pandemic levels.”

“They have at least a $1.6 billion structural gap — it’s actually probably bigger than that — at least half of that should be dealt with by improving the efficiency of the MTA,” Rein said. “It should not be left to state aid, the taxpayers or coming out of other programs.  It might come to that, but the first effort should be a more significant effort on productivity.”

He noted the challenge the MTA faces in improving efficiencies is dealing with its unionized workforce.

“The only way for the MTA to do that well is to partner with the unions. The unions have to be part of the solution,” he said. “They have to accept the changes in operations that make the MTA more efficient.”

“The MTA’s revenue shortfall increases pressure to find added funding from public coffers and for the MTA to better account for its savings goals, DiNapoli said. “As the MTA balances riders’ needs with its savings plans, it must communicate directly with the public on the impact these measures will have on straphangers, commuters and on its budget.”

The MTA is a state agency that Albany took over from the city during the fiscal crisis of the 1970s. Since 2011, it has sold about $43 billion of debt.

The MTA has about $24 billion of transportation revenue bonds outstanding, rated A3 by Moody’s Investors Service, BBB-plus by S&P Global Ratings, A-minus by Fitch Ratings and AA by Kroll Bond Rating Agency. Moody’s and S&P have stable outlooks on the credit while Fitch and Kroll maintain negative outlooks.

The Triborough Bridge and Tunnel Authority has almost $9 billion of debt outstanding. The TBTA’s senior lien general revenue resolution bonds are rated Aa3 by Moody’s AA-minus by S&P and Fitch and AA by Kroll. All four agencies have a stable outlook on the TBTA.

In August , the MTA said federal pandemic relief funds would be exhausted by the end of fiscal 2024 and projected budget gaps of up to $2.7 billion a year in the fiscal outyears as farebox revenue remains depressed.

Meanwhile, the congestion pricing system for Manhattan continues to move slowly toward implementation.

The proposed Central Business District Tolling program would charge tolls on all vehicles entering Manhattan south of 60th Street, not including the FDR Drive or the West Side Highway. These tolls are predicted to bring in about $1 billion of revenue a year for the agency.

Based on that revenue stream, the MTA could sell municipal bonds predicted to create about $15 billion of investment going toward its $55 billion capital plan.

”The Traffic Mobility Review Board is in the process of its deliberations on congestion pricing,” Rein said. “They are moving forward.” He said the revenue stream is sorely needed.

“There are always challenges with this, political and economic. But the reality is that the MTA needs the money and needs it badly. It needs the money to invest in its state of good repair work,” Rein said. “Any anybody who thinks — ‘It’s not that important, the MTA can do without it’ — are just wrong. They need this money so that the MTA doesn’t start falling apart.”

London’s rental market is in crisis. Here’s why and how renters are struggling
Are Cosmos’ ecosystem growth and roadmap enough to sustain ATOM’s current 50% monthly rally?
Kitchen And Bath Industry Show Awards Feature New Products With Wellness And Sustainability Benefits
Robots could surpass workers at Amazon by 2030, Cathie Wood says
How You Can Make Money with Options and Still Stay SAFE