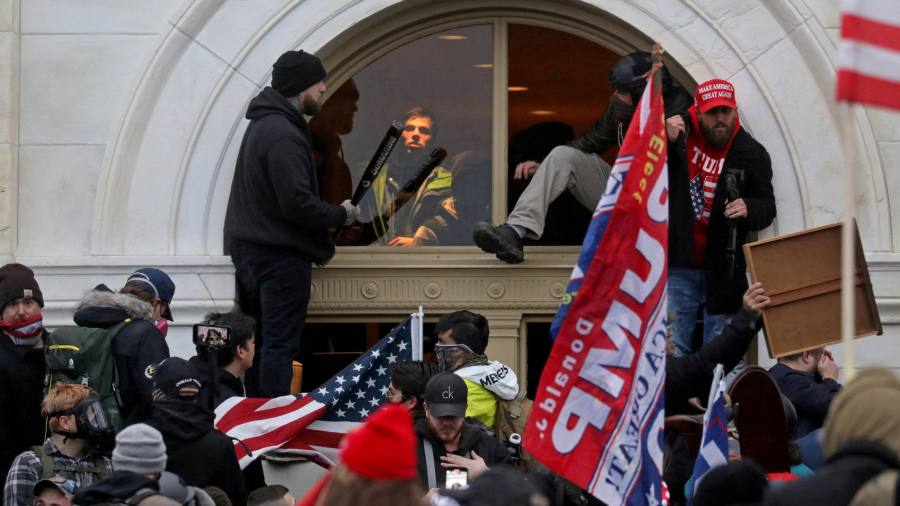 A US congressional panel said Donald Trump was the “central cause” of last year’s attack on the US Capitol, in a final report that laid out detailed evidence and offered the most damning assessment yet of the former president’s efforts to overturn the results of the 2020 election.

The 845-page document released late Thursday followed an inquiry that lasted for months, triggering ire and contempt among Trump’s allies as it dug deep into his role in fomenting the violent mob that stormed the US Capitol building on January 6 2021, threatening the peaceful transfer of power.

“In the Committee’s hearings, we presented evidence of what ultimately became a multi-part plan to overturn the 2020 Presidential election,” the bipartisan panel, led by Democratic House member Bennie Thompson and vice-chair Liz Cheney, the Wyoming Republican, wrote in the report.

“That evidence has led to an overriding and straightforward conclusion: the central cause of January 6th was one man, former President Donald Trump, whom many others followed. None of the events of January 6th would have happened without him.”

The report said that Trump and some of his closest allies made multiple efforts in the weeks after Trump lost the 2020 election to Joe Biden “to “corruptly obstruct, impede, or influence the counting of electoral votes on January 6th, and thereby overturn the lawful results of the election”.

The former president publicly refused to accept his defeat even though some said he appeared to understand he had lost, the report said.

Trump’s efforts, it said, were primarily focused on getting Mike Pence, his vice-president, “to assert and then exercise unprecedented and lawless powers to unilaterally alter the actual election outcome”.

Trump “summoned” a mob, “including armed extremists and conspiracy theorists”, to Washington on January 6 and later “incited” them to breach the Capitol, the report said.

The rioters did not stop until Trump asked them to stand down hours later — “but not before the Capitol was invaded, the election count was halted, feces were smeared in the Capitol, the Vice President and his family and many others were put in danger, and more than 140 law enforcement officers were attacked and seriously injured by mob rioters”, the report said.

“Even if it were true that President Trump genuinely believed the election was stolen, this is no defense,” it continued.

On Monday, the panel voted to recommend that the justice department pursue criminal charges against Trump on four counts, including assisting the rebellion and obstructing an official government proceeding.

Attorney-general Merrick Garland last month tapped Jack Smith as a special counsel to investigate the former president in connection with both his role in the January 6 attack and his mishandling of sensitive government material at his Mar-a-Lago estate.

More than 900 people have already been charged by the justice department in connection with January 6, the committee noted in its report. Of those, almost 500 have been convicted or pleaded guilty.

The committee’s final report comes as Trump faces a new torrent of criticism and scrutiny after launching a new bid for the White House in the 2024 presidential election. As well as the criminal referrals from the January 6 congressional probe — unprecedented for a former president — a separate tax-writing committee this week voted to release Trump’s tax records between 2015 and 2020.

There have been signs in public polling that Trump may be starting to lose his stranglehold on Republican voters amid frustration that the former president’s preferred candidates were defeated in key congressional races in the November midterm elections.

The top potential rival for the Republican presidential nomination in 2024, according to polls, is Ron DeSantis, the Florida governor, though he has not yet launched a campaign.

Many Republicans and Trump allies believed the January 6 congressional committee would have little impact on public opinion and would be viewed as just another episode of political theatre in Washington. But over the course of a series of televised public hearings that began this summer, the panel meticulously reconstructed the actions and motivations of the perpetrators of the riot, leading directly to Trump as the inspiration for the assault.

One of the most devastating testimonies came from former White House aide Cassidy Hutchinson, who recalled being “disgusted” that the former president actually wanted to join the mob that day. “We were watching the Capitol building defaced over a lie,” Hutchinson said.

The committee sought to interview a string of other Trump aides and allies from inside and outside his administration. Many of them, including Mark Meadows, the former White House chief of staff, refused to co-operate with the investigation.

Several lawmakers on the nine-member panel have paid a political price for conducting the probe. Of the two Republicans who defied their party to be part of the committee, Cheney was defeated in the primary election in her home state of Wyoming and will lose her seat in the House, while Adam Kinzinger of Illinois declined to even run for re-election. Elaine Luria, a swing-district Democrat from Virginia, failed to keep her House seat in November.

In a forward to the report, Cheney noted that some of her fellow Republicans, including Pence “along with many of the appointed officials who surrounded Donald Trump, worked to defeat many of the worst parts of Trump’s plan to overturn the election”.

But she chided those who backed Trump: “Today, I am perhaps most disappointed in many of my fellow conservatives who know better, those who stood against the threats of communism and Islamic terrorism but concluded that it was easier to appease Donald Trump, or keep their heads down. I had hoped for more from them.”

Nancy Pelosi, the Democratic House speaker who pushed hard to set up the January 6 committee, said they should all be praised “for bringing clarity of conscience in our work to defend Democracy and offering a ‘roadmap to justice’ that will help guard against future assaults”.