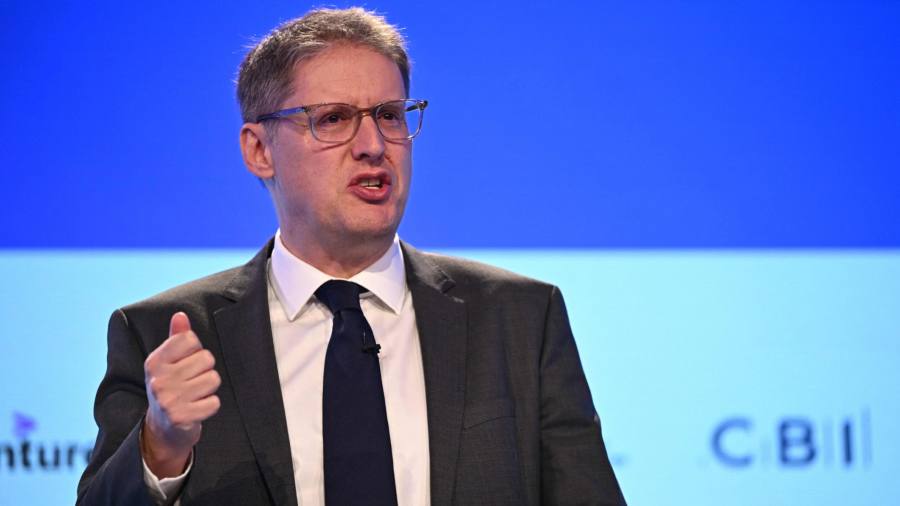 The UK will fall into a year-long recession in 2023 as the “stagflation” combination of rising inflation, negative growth and plummeting business investment weighs on the economy, according to Britain’s largest business group.

The CBI warned on Monday that gross domestic product would fall by 0.4 per cent in 2023, a downgrade from its previous forecast of 1 per cent growth set in June. It said consumer spending would drop throughout the year as inflation remained above the Bank of England target.

The lobby group gave a particular downbeat forecast on business investment, which it said would start to fall from the middle of next year when an existing “super deduction” tax allowance scheme designed to boost investment came to an end.

Business investment is expected to be 9 per cent below pre-Covid pandemic levels by the end of 2024 — equivalent to about £5bn.

CBI director-general Tony Danker warned: “[Companies] see potential growth opportunities, but a lack of ‘reasons to believe’ in the face of headwinds are causing them to pause investing.”

The economic outlook for the UK is among the weakest of the advanced nations covered by the CBI forecast, with only GDP in Germany set to fall at a slightly faster pace next year.

The CBI has called on the government to “unlock” business investment through capital allowances and regulatory changes, such as by removing the block to onshore wind, a more flexible immigration system and updating the national planning policy framework to ease restrictions around the use of land for development.

The group wants the government to boost business investment through a permanent investment tax incentive regime, which it estimates would unlock £50bn in capital investment every year by the end of the decade. Business investment has effectively stagnated since the Brexit vote in 2016, according to the CBI.

Danker raised concerns over the lack of action from the government to encourage investment and address skills and labour shortages across the country.

He called on ministers to resolve the impasse over implementation of the post-Brexit deal governing trade in Northern Ireland.

The trade arrangement, known as the Northern Ireland protocol, leaves the region inside the EU’s single market for goods, avoiding the need to put a hard border on the island of Ireland. The UK wants to rewrite the treaty, while Brussels has refused to renegotiate the agreement.

Danker said that co-operation between the UK and Brussels would lead to reduced trade friction under the Trade and Cooperation Agreement. He added that once agreement had been reached “then you start to open up all the other opportunities in Europe [such as] mutual recognition of professional qualifications . . . then I believe you will grow trade volumes”.

Danker said a continued focus on green investments was important, with many businesses worried that the government was “going backwards” in these areas.

Productivity would remain weak over the next two years, the CBI said, ending up about 2 per cent below pre-pandemic trends at the end of 2024.

The business group said inflation had probably peaked, but warned it would remain significantly above the BoE target of 2 per cent and would be about 3.9 per cent by the end of 2023.

The CBI forecast that the UK’s overall outlook would improve in 2024 with economic growth of 1.6 per cent, in part helped by falling inflation that would ease the pressures on household income.