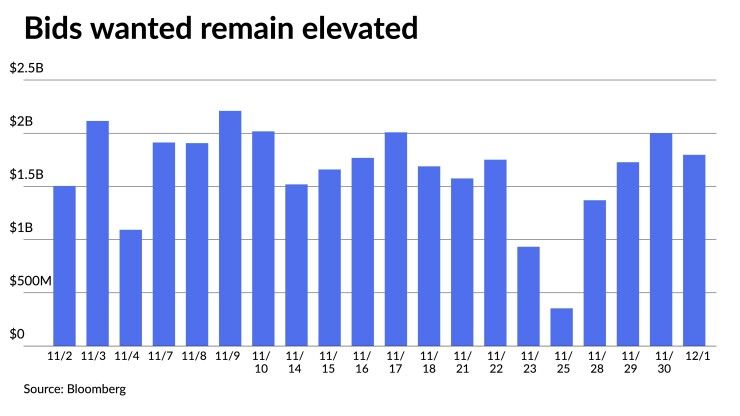 Municipals were little changed Friday as U.S. Treasuries pared back losses to end the day mixed after the morning shock of the hotter-than-expected jobs report sent them selling off. Equities ended mixed.

Despite the Fed’s attempts to cool the economy and lower decades-high inflation,the jobs report beat expectations and showed an additional63,000 new jobs in November, above the 200,000 expected.

Investors, though, should be prepared for increased market volatility, said Nigel Green, CEO and founder of the deVere Group.

The jobs report will “trigger turbulence as the labor market is still strong despite the Federal Reserve imposing the biggest series of rate rises in decades in its battle to cool inflation,” he said.

“This wage inflation means that the U.S. central bank is likely to be raising interest rates for longer than anticipated,” he said.

“The labor market remains far too hot for the Fed’s liking, and it will take much slower growth in employment and wages to return inflation to the central bank’s 2% target on a sustained basis,” said Wells Fargo Securities Senior Economist Sarah House and Economist Michael Pugliese.

They noted a downshift to a 50 basis point rate hike in December is likely, “but the Fed still has a ways to go in its tightening cycle.”

So far, 2022 has been a painful year for investors in most asset classes. However, the fixed income market — munis specifically — has “suffered a drawdown in line with some of the worst in history,” said David Grean, a portfolio manager at Parametric.

“Stubbornly high consumer price inflation caused the Federal Reserve to quickly pivot from accommodative monetary policy to hiking six times, bringing the target range between 3.75% and 4%,” Grean said. “This policy has contributed to a dramatic increase in nominal interest rates and a significant adjustment of municipal bond valuations.”

“2022 will be remembered as the worst year in the bond market’s history as persistently higher inflation led to ever-higher Fed target rate expectations and a hectic unwind of the bond rally that occurred over the past 15 years,” BofA strategists said in a report.

For the municipal market, they said a cumulative $110 billion of outflows from muni mutual funds prompted issuers to postpone many deals until 2023.

They believe ”2023 is shaping up to be a much more promising year as the Fed is expected to complete its tightening program in the first few months of the year, the economy is expected to enter a mild recession and market yields are expected to make a final round of rising early in the year before embarking on a rally into the year-end and beyond.”

Muni credit fundamentals may weaken some “as GDP turns negative in 2023, but by and large the muni market is well-prepared for a mild recession, and most of the credit spread widening is likely already priced in,” BofA strategists said.

As such, they expect “muni credit spreads to be stable in 2023, although there may be some variations among the sectors during a recession year.”

Calendar stands at $5.9B
Investors will be greeted Monday with a new-issue calendar estimated at $5.893 billion.

There are $4.285 billion of negotiated deals on tap and $1.608 billion on the competitive calendar.

DeKalb County, Georgia, (Aa3//AA-/) leads the competitive calendar with $552 million of water and sewerage revenue bonds, followed by $300 million of school bonds from the Cherry Hill Township Board of Education, New Jersey.

“A headline gain of 263,000 jobs was almost above the most optimistic estimate and the gain with wages was jaw-dropping,” he said. “Average hourly earnings rose twice as fast as forecast on a monthly basis, which will keep fueling inflationary pressures.”

“Underscoring the unique current economic environment, a slower pace of job growth could be deemed a positive development for the economy in that it should help reduce inflation pressures stemming from the jobs market,” said Wells Fargo Securities Senior Economist Sarah House and Economist Michael Pugliese. “But the Fed’s efforts to curb demand have yet to make much of a dent on this front.”

“The Fed is tightening monetary policy but somebody forgot to tell the labor market,” said Brian Coulton, chief economist for Fitch Ratings.

The good thing about these numbers, he said, “is that it shows the U.S. economy firmly got back to growth in the second half of the year.”

But job expansion “continuing at this speed will do nothing to ease the labor supply-demand imbalance that is worrying the Fed,” Coulton noted.

“Strong job creation and a big increase in wages underscore the Federal Reserve’s argument that a lot more work needs to be done to get inflation under control. It has certainly jolted the market,” said James Knightley, ING’s Chief International Economist. “But with recessionary fears lingering, market participants will remain skeptical over how long the strong performance can last.”

Monthly payroll employment growth was “well above Fed Chair Powell’s estimate of the rate needed to keep up with population growth,” they said.

Worryingly for the Fed, nominal wage growth accelerated to 0.6% month-over-month and 5.1% year-over-year, up from 0.5% and 4.9%, respectively, in October, Levy and Ghzalah said.

Moreover, “upward revisions to prior month’s data strengthened the tone of the report, and the tentative trend of moderating wage growth hinted at in the September and October employment reports was revised away,” they said.

They said that November’s jobs report “strengthens the case for a higher terminal rate and will likely prompt the Fed to err on the side of caution in both the level and duration of policy tightening, particularly given their concerns over the potential for a wage price spiral to develop.”

Fed policymakers “have made clear that they want to see a healthier balance between supply and demand in the labor market,” House and Pugliese said.

Ideally, they said “robust labor supply growth would alleviate the need for much pain on the demand side,” but “the labor supply picture this year has been underwhelming, and today’s report was yet another disappointment on that front.”

The labor force participation rate is now below where it was in January.

Furthermore, Powell recently said “policies to support labor supply are not the domain of the Fed: Our tools work principally on demand.”

“The message from Chair Powell and company is clear: labor cost growth needs to slow to a rate consistent with the Fed’s 2% inflation target, and the Fed will do what it takes to achieve this goal on the demand side regardless of what is happening on the supply side,” House and Pugliese said.

Policymaker’s objective is “a gradual and controlled slowdown in demand, and the data suggest some success in this regard,” they noted.

Nonfarm payroll growth has averaged 272,000, per month over the past three months, below the 391,000 average for the year-to-date.

“Other labor market indicators such as job openings, quits, small business hiring plans and consumer sentiment about job availability suggest the labor market is cooling rather than freezing over,” House and Pugliese said.

These factors give the FOMC “the labor market data they need to downshift to a 50 bps rate hike” at its upcoming December meeting.

That said, payroll growth of 263,000 is still too fast at this stage of the business cycle, and wage growth of around 5% is half to one percentage points above “what would be consistent with the Fed’s inflation target,” they noted.

“A downshift to a 50 bps rate hike in December seems likely, but the Fed still has a ways to go in its tightening cycle,” House and Pugliese said.

“If the Fed sticks with a more moderate 50 bps hike in December as they have earlier indicated, the 75-bps hike may ultimately be the elephant in the room,” said Beth Ann Bovino, US Chief Economist at S&P Global Ratings. “Either way, with still-hot pricing pressure, our forecast of 5.00 to 5.25% exit fed funds rate seems increasingly likely.”

If the Fed eases too much or too soon, she said “they are once again behind the curve and are forced to catch up with more rate hikes next year, with an even higher exit rate next year.”

That means an even worse recession for 2023, Bovino said.

“While we see it as a short and shallow one, a recession is on the horizon, with the Fed playing Grinch next year,” she said.