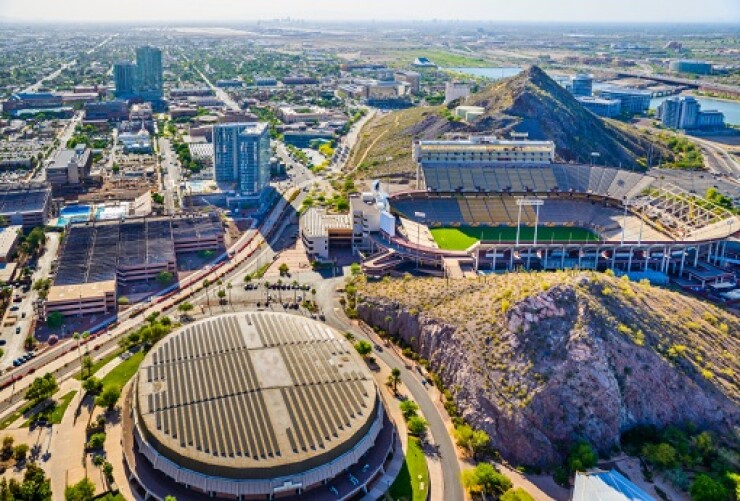 A proposed $2.1 billion development that includes an arena for the National Hockey League’s Arizona Coyotes and municipal bond financing is scheduled for a vote by the Tempe City Council Tuesday evening.

If approved, the developer will need to woo residents, who will have the final say on whether it will be built.

The mostly privately financed project includes a 16,000-seat arena, a practice facility, two hotels, 330,000 square feet of office space, up to 2,100 residential units, and at least 315,000 square feet of retail space, according to updated details released earlier this month. Tempe commenced negotiations in June with Bluebird Development LLC, an affiliate of Meruelo Group and the team, which submitted the only response to a request for proposals for a professional sports entertainment district the city issued last year for a 46-acre landfill site it owns.

To initiate the site’s transformation from a “landfill into a landmark,” the proposal calls for Tempe to create a community facilities district (CFD), a legal entity separate from the city, that would issue 30-year bonds to fund the removal of 1.5 million tons of garbage and hazardous waste and pay for public infrastructure.

The latest estimate of those costs is $210 million to $230 million. The bonds would be backed by a portion of sales, property, and hotel tax revenue generated by the development, as well as a surcharge the developer would impose on all sales and taxable activities within the project.

At a Nov. 22 city council public hearing on the project, Nick Wood, Bluebird’s attorney, said the responsibility for cleaning up the site rests with Tempe although Coyotes owner Alex Meruelo will jumpstart the process with a nonrefundable $40 million to clean up land for the arena site with the money then credited back to the developer for the land’s approximately $50.3 million purchase price.

“There’s no way this city could afford $230 million to clean up that site and nobody else is going to write a check to clean it up for you,” Wood said. “This is the only project that can make this work.”

To make the bonds more attractive to investors, they would be backed by a “super priority lien on all of the privately owned land and improvements,” according to Wood.

“There will be $2.1 billion with the land and improvements securing, guaranteeing those debt service payments,” he said.

Once the developer acquires title to the arena property, the CFD can begin selling bonds. Tom Duensing, Tempe’s chief financial officer, said the bonds would be senior to other developer-issued debt for the project and would be sold in phases.

In return for paying at least half of debt service and making other contributions to the city, Bluebird is seeking a 30-year tax abatement for the arena, music venue, practice facility, and team headquarters, and an eight-year abatement for the residential, retail, and office parts of the development.

Tempe’s consultant, Hunden Strategic Partners, projected the development would generate $390 million in sales and property tax revenue for the city over 30 years.

If the project clears the city council it will head to a referendum after the council took action Nov. 10 to reserve a spot on the May 16 ballot.

The developer has committed to launch a petition drive to gather the necessary signatures towards that end, as well as pay all of the city’s referendum-related costs.

The project cleared an initial hurdle earlier this month when the Tempe Development Review Commission (DRC) unanimously voted in favor of recommending a zoning map amendment and planned area development overlay, and the general plan amendment to the city council.

Wood told the DRC the developer has been out in the community holding more than 30 meetings about the project.

“We’ve had really a lot of overwhelming amounts of support and excitement about this,” he said.
“But of course there’s always people who are not excited about this, there are people who are opposed to this for any number of reasons, many of them are political.”

One major opponent to certain aspects of the project is nearby Phoenix Sky Harbor International Airport, which said it does not object to the arena or the entertainment district.

“The airport does strongly object to the project’s proposed residential development, which would place up to 2,100 residential units directly under a flight path which was designed to spare Tempe residents from the effects of aircraft noise,”  a statement on its website said. “Including residential in this development would violate an intergovernmental agreement between the cities of Phoenix and Tempe.”

In a Nov. 14 letter to the city, Chad Makovsky, the airport’s director of aviation services, said if the project moves forward additional challenges could be made.

“Phoenix is not aware of a review of whether this traffic issue will increase cut-through traffic at Sky Harbor – potentially increasing the congestion on already congested roadways owned, operated, and maintained by the airport,” the letter stated.

Some speakers at the Nov. 22 public hearing cited traffic concerns, along with the team’s troubled stay in Glendale, Arizona, as reasons for their opposition.

The Coyotes cost the Phoenix suburb tens of millions of dollars and several rating downgrades amid a team bankruptcy filing and multiple changes in the franchise’s ownership. Meruelo became the Coyotes’ majority owner and chairman in 2019.

The Coyotes currently play in Arizona State University’s multi-purpose Mullett Arena in Tempe after its year-to-year lease for the Gila River Arena was not renewed last year by Glendale, which financed the facility with $180 million of debt.

The university’s 5,000-seat arena is much smaller than other NHL facilities, with the next smallest facility seating more than 10,000 additional fans. The Coyotes hope to have a new facility ready for the 2025 season.

In its last season in Glendale, the team drew an average of about 11,600 fans per game. The Coyotes ended that season as the NHL’s second-worst team with 25 wins and 50 losses and the team has a losing record so far this season.