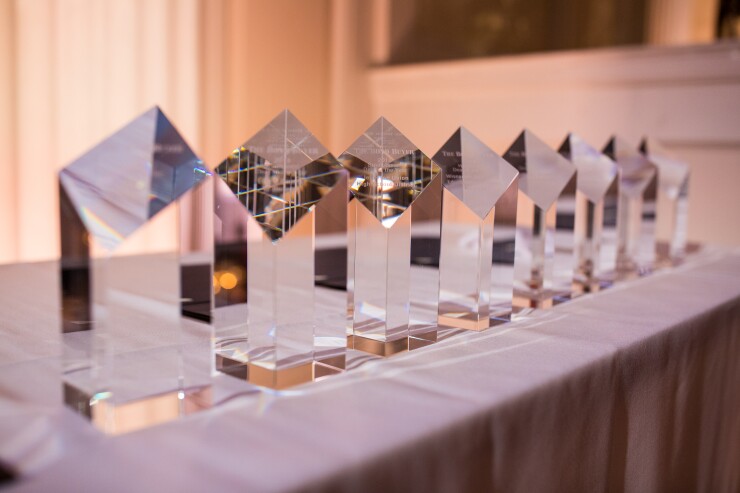 The Bond Buyer announced the recipients of its annual Deal of the Year awards, marking the 21st year it has recognized outstanding achievement in municipal finance.

The Bond Buyer has named winners in 10 categories: five awards in our regional areas of coverage, along with five in additional categories. All award winners will be honored at a ceremony at Guastavino’s in New York City on Dec. 6 and are also finalists for the national Deal of the Year award, which will be announced at the close of the gala.

The Bond Buyer’s editorial board considered a range of factors when judging entries, including: creativity, the ability to pull a complex transaction together under challenging conditions, the ability to serve as a model for other financings, and the public purpose for which a deal’s proceeds were used.

“This year’s lineup is reflective of the full range of communities and public purposes this market comprises,” said Mike Scarchilli, Editor in Chief of The Bond Buyer. “The deals recognized here embody the creativity and resourcefulness of this industry, brought to bear on projects that advance the infrastructure and quality of life in the nation’s municipalities.”

For the 12th year, the Deal of the Year event will also include the presentation of the Freda Johnson Award for Trailblazing Women in Public Finance. This year marks the eighth in which the organization is honoring two public finance professionals: one from the public sector and one from the private. The 2022 honorees are Deborah Goldberg, treasurer of the commonwealth of Massachusetts, and Emilie Ninan, public finance partner at Ballard Spahr and co-chair of the firm’s finance department.

Here are the 2022 Deal of the Year award winners:

SOUTHEASTREGION
The Southeast winner is the Louisiana Utilities Restoration Corp.’s $3.2 billion offering, the largest municipal securities transaction in state history. After being hit with a barrage of storms that damaged the state’s electric infrastructure, Louisiana sought low-cost financing to give relief to a battered electric utility provider and its ratepayers. The solution was a ratepayer-backed utility securitization that was registered as muni, but structured as a traditional asset-backed securities financing.

FAR WEST REGION
The San Diego County Regional Airport Authority’s $1.94 billion offering is the winner in the Far West. The bond proceeds pay for the replacement of Terminal 1, roadway and parking improvements and a new administration building, and advance refund outstanding bonds for debt service savings. The authority was able to upsize its deal at pricing by $600 million, enabling it to fund projects in out years.

NORTHEAST REGION
The Northeast winner is the District of Columbia’s $309 million long-term P3 agreement with Plenary Infrastructure DC, the nation’s largest urban streetlight modernization project to use the public-private partnership model. It was also the first street lighting project to make use of tax-exempt private activity bonds, with $144 million of PABs joined by a $15 million tranche of taxable bonds. The final outcome will be modern infrastructure that reduces energy usage by more than 50 percent.

MIDWEST REGION
The city of Joliet, Illinois’ $76.6 million offering of waterworks and sewerage senior lien revenue bond anticipation notes is the winner in the Midwest. The transaction kicked off the first leg of financing of the city’s preliminary 100-year agreement with Chicago to purchase treated Lake Michigan water to stave off a looming drinking-water crisis, a partnership that could serve as a model for communities struggling to manage a dwindling water supply.

SOUTHWEST REGION
The Southwest winner is a $21.7 million deal for Apache County, Arizona’s Window Rock Unified School District No. 8, which serves more than 390 square miles of the Navajo Nation in Arizona. Given the remote nature of the district, affordable housing for teachers is critical, and the units it built decades ago are worn out. To solve the problem, the district leveraged a portion of its annual Federal Impact Aid Revenues.

ESG/GREEN FINANCING
The ESG/Green Financing winner is the commonwealth of Massachusetts’ nearly $2.7 billion social bond deal — the largest social bond deal yet in the ESG space of the muni market. The financing repaid federal dollars for the commonwealth of Massachusetts’ Unemployment Insurance Trust Fund for benefits given to people affected by the COVID-19 pandemic. The financing was a new eligible social project as defined by the ICMA Social Bond Principles.

PUBLIC-PRIVATE PARTNERSHIP FINANCING
The winner in the P3 category financed a portion of the $2.75 billion Fargo-Moorhead Metropolitan Area Flood Risk Management Project, a public-private partnership between Red River Valley Alliance and the Metro Flood Diversion Authority to reduce local flooding risk. The bonds were issued through the Public Finance Authority as one component of a three-part debt financing package and set the template for the new federal P3 pilot program to address flood mitigation and ecosystem restoration.

INNOVATIVE FINANCING
The Alabama Federal Aid Highway Finance Authority is the honoree in the Innovative Financing category for its $1.5 billion offering. Its creative introduction of a new credit structure that helped the Authority garner credit ratings that remain among the highest in the nation for a “direct GARVEE with a backstop pledge” credit.

HEALTH CARE FINANCING
The winner in the Health Care category is the inaugural public offering for the University of Louisville Health. Proceeds from the $411 million deal funded sorely needed capital and liquidity to further UofL Health’s critical mission to its underserved community. UofL has the only level-one trauma center in the region, as well as the region’s only solid organ transplant center.

SMALL ISSUER FINANCING
The Small Issuer honoree is Gallatin County, Montana’s $65 million transaction to fund its Bozeman Fiber project, which brings lightning-fast internet speeds to an area underserved by internet service providers and went live to its first customers in September 2022. The transaction is secured solely by the net revenues generated by the Yellowstone Fiber Network.