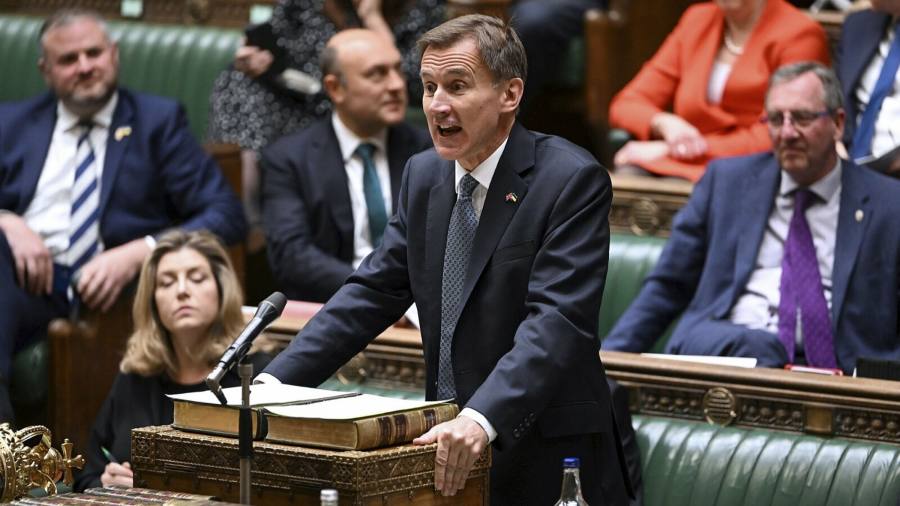 British households are set for the steepest fall in living standards on record and the highest tax burden since the second world war after Jeremy Hunt laid out plans to cut public spending and raise revenue to fill a £55bn fiscal hole.

The chancellor told a sombre House of Commons that a massive fiscal consolidation, including £30bn of spending cuts and £25bn of tax rises, was needed to restore Britain’s credibility and tame inflation.

“We are asking more from those who have more,” he said. But forecasts by the independent Office for Budget Responsibility highlighted the coming pain for the entire country.

The OBR, whose projections underpin the government’s efforts to restore the public finances to health after Liz Truss’s disastrous premiership, said the economy would shrink 1.4 per cent next year and would not regain pre-pandemic levels until late 2024.

It added that high inflation, forecast to remain at 7.4 per cent next year, will erode real wages. Living standards are projected to fall by the most in six decades, down 7 per cent over the two financial years to 2023-24 — despite more than £100bn of additional government support. The decline would wipe out the previous eight years’ growth.

The main goal of the chancellor’s tax rises and spending cuts was to reassure markets that the UK had returned to prudent management of the nation’s resources.

The pound fell 0.6 per cent to $1.18 against the dollar, while UK government bonds rallied after the chancellor’s speech to finish flat on the day.

While former chancellor Kwasi Kwarteng’s September ‘mini’ Budget was the largest tax-cutting plan for 50 years, Thursday’s statement was the biggest tax-raising effort for 30 years other than during the pandemic. The OBR said that by 2027-2028 Britain’s tax burden would be 37.1 per cent of gross domestic product — a postwar record.

Much of the fiscal consolidation, including “stealth” rises in taxes and a big squeeze on public spending, is scheduled for the years after an expected general election in 2024. Rachel Reeves, Labour Treasury spokesperson, said it was intended as an election “trap” for her party.

But one of the biggest increases in taxation — freezing national insurance thresholds for businesses — will take effect from April 2023 and raise £5.8bn by 2028. A windfall tax on energy companies will raise £14bn next year.

Some £35bn in savings, by far the fiscal consolidation’s biggest component, will come from holding down public spending during the next parliament while freezing capital spending.

But Hunt provided an extra £5bn a year for health and social services and a further £3bn for schools for the next two financial years to soften the blow of rising inflation.

He also announced inflation-linked increases for pensioners and those on benefits, confirming that he was keeping the “pensions triple lock”. He said: “To be British is to be compassionate.”

The chancellor insisted the tax rises and spending cuts were required by an “international crisis” and played down the idea that any of the problems were homegrown. “It is a recession made in Russia, a recovery made in Britain,” he said.

Hunt said Britain’s debt would fall as a share of GDP by the end of the five-year forecast provided by the OBR, which was sidelined by Kwarteng.

The chancellor said his principal objective was to help the Bank of England defeat inflation, which hit a 41-year high of 11.1 per cent in October.

His tax-raising measures include a cut in the threshold for the 45 per cent top rate of tax from £150,000 to £125,000. The burden of dividend taxes and capital gains tax will also rise.

He said average household energy bills would be capped at £3,000 a year from April for everyone, while the most vulnerable would receive special help.

The chancellor also confirmed that EU rules governing the insurance sector, Solvency II, would be rewritten to release “tens of billions of pounds” of capital to be spent on infrastructure. The Sizewell C nuclear power station would be built.

Defying forecasts, crude oil prices have wiped out most of this year’s gains and could head lower
Is The Bay Area Housing Market Cooling Off?
Stocks making the biggest moves after hours: Salesforce, Snowflake, Costco, Five Below and more
Trader Joe takes its first step into the Ethereum ecosystem
Sunak signals determination for UK to engage with China