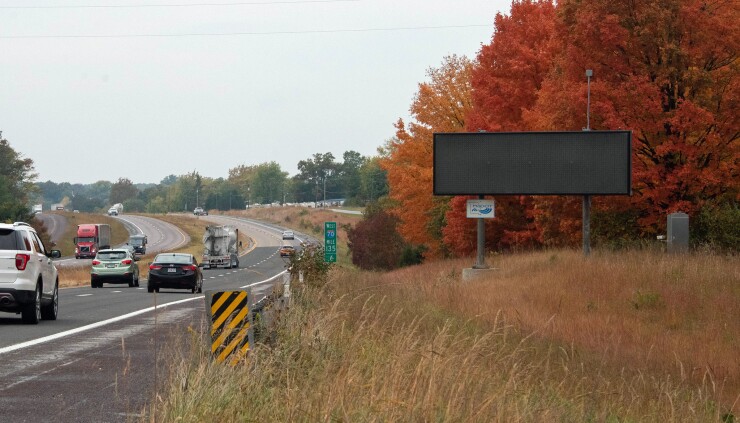 The Missouri Highways and Transportation Commission heads into the market Tuesday with a $489 million new money deal with a new AAA rating attached to the third-lien paper.

The bonds drew an upgrade to AAA from Fitch Ratings citing an uptick in pledged revenues.

Longer term, the bonds will benefit legislative passage last year of the state’s first increase of its motor fuel tax in 25 years. Annual increases will take place through 2025. The new funding will help the state’s Department of Transportation chip away at the state’s “High Priority Unfunded Needs” list.

Fitch’s upgrade “reflects the security structure’s improved resilience as pledged revenues have expanded modestly and debt service on senior and second lien bonds has declined” and analysts expect “the third lien’s resiliency to remain very high even as debt service increases in the short-term as a result of the current issue.”

The commission adopted a debt policy in 2019 that constrains new money borrowing capacity so coverage ratios are expected to remain strong even in an economic downturn that damages pledged revenue collections. State legislation in 2019 allowed for some additional borrowing capacity under the subordinate liens.

The commission has a total of $752 million of first, second and third lien outstanding bonds. “We currently do not have any other plans at this time to issue additional debt,” said MDOT Chief Financial Officer Brenda Morris.

State road fund revenues fell by 7.2% to $689 million in fiscal 2022 after reaching an historic high of $743 million in 2021 following a surge in sales tax collections as the state’s economy reopened after COVID-19 shutdowns.

Pledged revenues also spiked in fiscal 2021 with the infusion of federal COVID relief. State road fund collections slipped to $689 million for fiscal 2022 but they remained above pre-pandemic averages. A 2% growth rate is expected for fiscal 2023.

“These revenues are relatively stable, and have benefitted from an increase in the motor fuel tax that was effective in October 2021,” Moody’s said. “The bonds also benefit from strong maximum annual debt service coverage, a strong legal structure and the constitutional dedication of pledged revenue for transportation purposes.”

The commission returned to the market last year with a $91 million issue for bridge projects after a two-year absence.

The motor fuels tax increase could generate nearly $400 million more for the state in the coming years. The state will phase in the 12.5 cent-per-gallon increase by 2.5 cents annually beginning this fall and continuing through 2025, but motorists can seek a refund from the additional tax so the ultimate uptick in revenue is not certain. Missouri’s state government carries triple-A ratings from Fitch, Moody’s, and S&P.