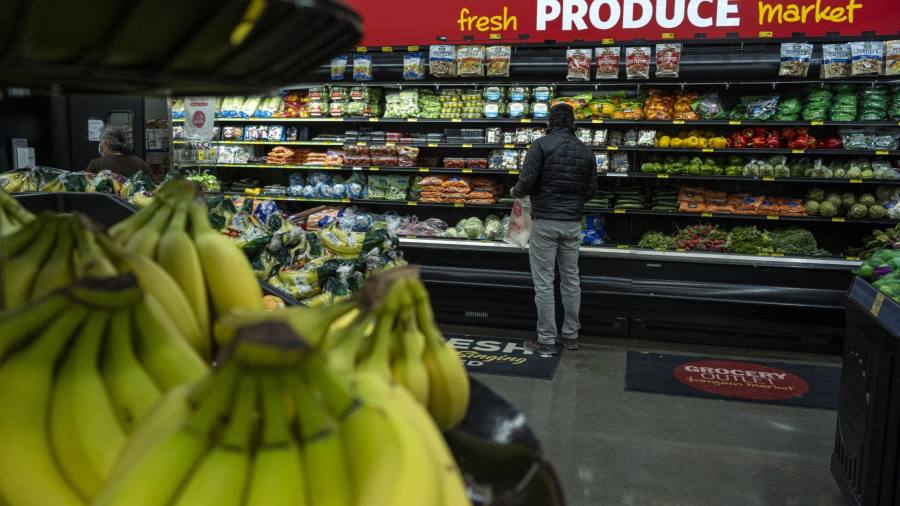 US stocks roared ahead on Thursday in their strongest day in more than two and a half years, with investors emboldened by inflation data that showed decelerating increases in consumer prices and set the stage for a slower pace of interest rate rises by the Federal Reserve.

In government bond markets, the yield on the two-year Treasury note, which is particularly sensitive to interest rate moves, fell 0.25 percentage points to 4.33 per cent, its largest drop since October 2008. Yields fall as prices rise.

The yield on the benchmark 10-year Treasury note fell 0.27 percentage points to 3.82 per cent, its sharpest move since March 2020.

The bounce in markets came after the annual rise on the US consumer price index was reported at 7.7 per cent in October, the smallest 12-month increase since January and a sharp drop from an annual rate of 8.2 per cent in September. Economists had forecast an 8 per cent rise.

The core CPI reading, which excludes food and energy prices, rose 6.3 per cent year on year, below expectations of 6.5 per cent and September’s reading of 6.6 per cent.

The dollar fell immediately after the CPI report as interest rate expectations fell, dropping 2.3 per cent against a basket of six peers in its worst day in seven years.

“It’s a great number,” said Jack Ablin, chief investment officer at Cresset Capital, said about the inflation reading. “I like that yields are down as well.”

Ablin said the inflation figure gave investors confidence that equities and bonds could perform well in the near future.

“I can’t tell you if this is the start of a bull market rally, but a precondition of a bull market is weaker inflation and a weaker dollar,” he said, adding that investors will await comments from the Fed in coming weeks to see if it could change course on monetary policy.

The lower-than-expected readings ease pressure on the Fed to maintain its policy of aggressive interest rate rises to combat inflation. The central bank has delivered four consecutive rises of 0.75 percentage points this year in an attempt to slow price growth.

In futures markets, investors on Thursday were betting on an 85 per cent chance of a smaller 0.5 percentage point rise at the Fed’s meeting in December, compared with 57 per cent yesterday.

Fed chair Jay Powell signalled earlier this month that the central bank might slow the pace of monetary tightening but reach a higher than expected peak.

Former US Treasury secretary Lawrence Summers earlier this week said the terminal rate could hit “6 [per cent] or more”. But markets now expect the Fed’s benchmark interest rate to peak at about 4.8 per cent in May 2023, having previously predicted a peak of just over 5 per cent in June.

The CPI numbers “will be a catalyst, I think we’ll have a pretty good market rally to the end of the year”, said Jim Paulsen, chief investment strategist at the Leuthold Group.

“The fact the Fed may slow down from here means what could break out is a conversation not just about recession rather than inflation, but a conversation about maybe avoiding a recession entirely,” said Paulsen. “Maybe we’ll have a soft landing.”

Analysts at JPMorgan said the latest CPI figures supported the view that “a decent amount of the inflation” over the past year “will prove to be temporary or transitory”, reviving a word that Powell was mocked for using to describe inflation this time last year.

Traders are also assessing the incoming results of this week’s US midterm elections. One day after polls closed, elections in multiple states were yet to be called, leaving control of both the Senate and House up in the air. However, analysts said the Republican party’s showing so far had already undermined pollster predictions of a “red wave” in both legislative chambers.

In Asia on Thursday, Japan’s Topix shed 0.7 per cent, the Hang Seng index in Hong Kong fell 1.7 per cent and China’s CSI 300 index of Shanghai- and Shenzhen-listed stocks fell 0.7 per cent.