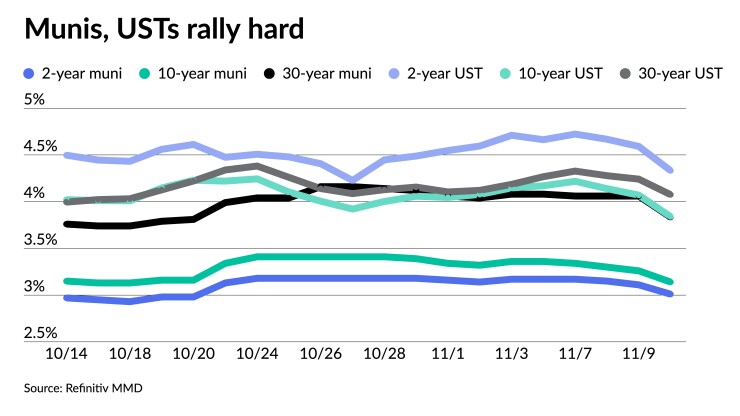 U.S. Treasuries rallied out of the gates seeing yields close the session up to 31 basis points lower on the short end of the curve, while equities made massive gains, with the Dow Jones Industrial Average climbing over 1,200 points and the S&P 500 gaining 5.5%.

Munis underperformed USTs, but triple-A yields were bumped eight to 19 basis points, depending on the scale, sending the one-year to at or just below 3% and the 30-year below 4%.

“U.S. inflation slowed more than expected in October, fueling hopes that the peak has passed and the Fed can slow the pace of rate hikes and perhaps bring them to an earlier conclusion,” said James Knightley, ING’s Chief International Economist.

But he noted that “the jobs market remains tight and month-on-month readings are still tracking far higher than required to get inflation back to 2%,” so the “all-clear” can’t be given yet.

Bond markets get a reprieve with the Veterans Day long weekend after what has been a volatile few weeks culminating with midterm elections, weaker earnings and the CPI report.

The outcome of this week’s midterms has been somewhat surprising, according to Barclays PLC, with some races not yet called, still leaving control of congress uncertain.

From this point, a lot depends on rates, but with USTs and munis rallying after Thursday’s CPI print, Barclays strategists Mikhail Foux, Clare Pickering and Mayur Patel said there “might finally start to see some support for the market … [and] would not be surprised if tax-exempts outperform even more in the coming weeks.”

“Other technical factors including still relatively slow supply, dealer positioning that became much lighter in the past month, and a slower pace of bid-wanteds point to a much more constructive market environment in late November/December,” they said. “Maybe the year-end rally will not be overly strong this year, but we will likely see one, in our view.”

This year, Barclays strategists said, “higher rates continue to cause a majority of U.S. fixed income asset classes to underperform on a total return basis, including munis.”

Rates have driven the negative performance, with the sharp rate moves this year leading to sizable muni fund outflows, they said.

Refinitiv Lipper on Thursday reported $2.537 billion of outflows from municipal bond mutual funds for the week ending Wednesday after $2.389 billion the week prior.

Barclays said record outflows on an absolute basis in 2022 have been seen by the investment grade and high yield muni funds.

Outflows have also affected valuations, as “mutual fund assets are more mobile than retail and other institutional capital, and thus fund flows are more likely to affect valuations as portfolio managers sell holdings to meet client redemptions, or invest new capital as a result of fresh commitments,” according to Barclays strategists.

As mutual fund assets under management decline this year, they said, “one of the main pressure points they face is how best to reallocate their portfolios amid increasing redemption requests, especially during 2Q22, which accounted for more than half of year-to-date outflows.”

“The likely source of funds to meet redemptions generally tends to be cash and cash-like instruments,” resulting in muni mutual funds’ cash buffers decreasing this year.

They noted the ability of mutual funds “to use cash buffers to fulfill redemptions likely provided some support for the muni market, especially earlier in the year when outflows began.”

Calendar at $5.8B
Investors will be greeted Monday with a new-issue calendar estimated at $5.781 billion

There are $4.308 billion of negotiated deals on tap and $1.473 billion on the competitive calendar.

The negotiated calendar is led by $575 million of certificates of participation from the Duval County School Board, Florida. Other notable deals are $458 million from the Louisiana Local Government Environmental Facilities and Community Development Authority and $425 million from the New York City Municipal Water Finance Authority.

The Missouri Highways and Transportation Commission leads the competitive calendar with $489 million, followed by Memphis, Tennessee, with $143 million and the Mukilteo School District No. 6, Washington, with $116 million.

The average seven-day simple yield for all tax-free and municipal money-market funds rose to 1.85%.

Taxable money-fund assets outflows of $19.69 billion to end the reporting week at $4.450 trillion of total net assets. The average seven-day simple yield for all taxable reporting funds rose to 3.18%.

CPI release comes in below expectations
While inflation is still a threat to the U.S. economy, the consumer price index rose less than anticipated in October, suggesting that pressures may be beginning to ease.

“This inflation report was a nice surprise,” said Edward Moya, senior market analysts at OANDA. “Inflation has been very slow to come down, but this report gives up hope that this deceleration with pricing pressures might bring back hopes of a soft landing.

Thursday’s “CPI release has good news on a number of fronts — lower core goods prices, a slower pace of rent inflation, and a large negative adjustment in health insurance — and it should help the Fed make a case for a downshift in the pace of tightening,” said Gary Pzezeo, Head of Fixed Income at CIBC Private Wealth.

But while inflation came in below expectations, it remains historically high,” said Phillip Neuhart, Director of Market and Economic Research at First Citizens Bank Wealth Management. The Fed “will continue to tighten monetary policy until it is clear inflation is in a persistent downtrend, and this report, while welcome news, does not give the Fed much reason to materially change course,” he said.

“The Fed was already likely to slow the pace of rate hikes at the next meeting given increasing risks from rapid monetary policy tightening; this slowing in inflation will help support that path,” said Josh Jamner, Investment Strategy Analyst at ClearBridge Investments.

But he said, “We have been here before, however, with inflation showing signs of slowing in July only to pick right back up in August and September.”

Policymakers have indicated that their preferred next move would be a step-down to a 50 basis point rate increase at the December Federal Open Market Committee meeting, according to a Morgan Stanley research report.

Signs of deceleration will help Fed officials moderate the reduction in the pace of tightening, but “a stronger-than-expected December payroll print of more than 300,000 could complicate the issue,” the report noted.

“Services inflation is a sign of price pressures becoming embedded and these numbers are way too high for the Fed to take much comfort that monetary policy tightening to date has had much impact on underlying inflation,” said Brian Coulton, chief economist at Fitch.

“The CPI data, on its own, is probably not enough to lead the Fed to either pause or pivot toward easing,” Pzezeo said of December’s Federal Open Market Committee meeting. “Core CPI is still running at an uncomfortably high level and the Fed is on record as wanting to see a string of good inflation news before ending the current tightening program.”

Jamner said the good news, though, is it “will likely take further slowing in inflation in the coming months for the Fed to feel full confident in putting the brakes on future rate hikes, which could occur in the first quarter of next year if the data cooperates.”

“This inflation was a good sign that the Fed is on the right path for winning this war with inflation, but there will still be a lot of variables thrown its way over the next couple of quarters,” said Moya. “The Fed could easily bring rates to 5.00% and if inflation proves to be sticker, it could be as high as 5.50%.

The Dormitory Authority of the State of New York (A1///) is set to price Thursday $114.975 million of Rochester Institute of Technology revenue bonds, Series 2022A, serials 2028-2042. RBC Capital Markets.