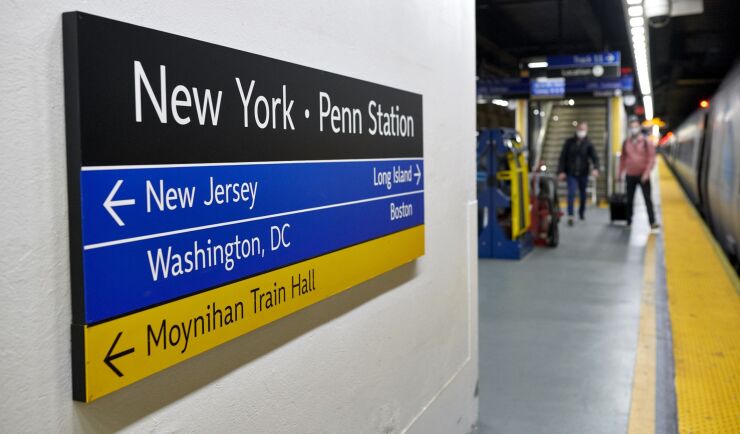 On the heels of her election, New York Gov. Kathy Hochul returns to Albany to face the stiffest resistance yet to her $8 billion plan to redevelop Manhattan’s Penn Station, as a recently filed lawsuit seeks to halt the project before it breaks ground.

According to the arrangement originally inked in 2018 during former Gov. Andrew Cuomo’s administration, Vornado will have access to an 80-year lease on an 18-million-square-foot plot along with $1.2 billion in property and revenue tax breaks meant to encourage the development of several commercial skyscrapers on grounds near Penn Station.

Vornado will make payments in lieu of taxes to the state from revenue on office rentals in the new towers which, the Hochul administration estimates would be over $8 billion for the state to use on critical improvements to Penn Station, including expanding service, renovating commuter stations and bettering street access to the transportation hub for its 650,000 daily commuters.

“The framework ensures that the city maintains a current and consistent level of property tax revenue while requiring that funding for the station, vibrant open space, and public realm improvements, comes in part from private development,” Hochul said in a press release.

Samuel Turvey, chair of the Penn Station Defense Fund, is one of the plaintiffs in the case against the state, which consists of a group of activists, area residents and local politicians opposed to the deal.

The state accepted little input from experts, local officials, or area residents, Turvey said, resulting in a lopsided arrangement that prioritizes Vornado’s commercial interests over the redevelopment of the station.

“They’ve come away with a plan that really favors one developer instead of the city, state or region as a whole,” Turvey said. “We endorse improving Penn Station and we’d love to see improvements in the neighborhood, but we do not think that this sort of Robert Moses-style urban renewal, get out of our way and nobody gets hurt business, is where the legal standards are today.”

The lawsuit questions the viability of the funding structure and revenue predictions of the deal. Though Hochul expects billions of PILOT payments from Vornado’s towers for Penn Station, some experts disagree.

New York City’s commercial vacancy rate currently hovers around 20% following an exodus of business during the COVID-19 pandemic. Considering the persistence of work-from-home changes, things could remain that way for the foreseeable future, Turvey said.

That raises concerns about the ability of Vornado to provide enough revenue to effectively carry out an adequate redevelopment of the transit hub, said former Lt. Gov. Richard Ravitch, who penned an affidavit criticizing the plan that was submitted with the lawsuit.

“Right now, the commercial office market is a disaster in New York,” Ravitch said. “To pretend that Vornado was going to build there and then pay some unspecified sum towards the rehabilitation of Penn Station is wrong.”

Along with criticizing the funding structure of the plan, Ravitch pointed to the lack of input from local officials.

“What’s surprising is that the city went along with the governor on this, whereas the entire community down there is dead set opposed to all these office buildings,” he said.

Turvey said another important part of the lawsuit’s arguments was the resounding silence by the city on the state’s decision to designate the Midtown-East neighborhood around Penn Station as blighted, a move that paved the way for the generous incentive package to Vornado, as well as giving the state legal authority to evict tenants from several apartment buildings slated to be demolished to make room for the new tower.

“All this was a sleight of hand,” Turvey said. “Declaring that the neighborhood is blighted so that the EDC can go forward with this and not apply any of the applicable city’s zoning or review processes, we feel that’s just plain wrong.”

If successful, the lawsuit could do anything from temporally freezing to permanently halting the project, allowing alternative plans to be considered, Turvey said.

“The state’s transit plan is backward,” he said. “It’s doubling down on the way transit facilities ran in the middle of the last century, instead of where all the modern cities are moving.”

Key to Rethink’s master plan is an integration of the station’s siloed transportation operators, Turvey said, and a shift in service that would serve the city and greater metropolitan area, including Long Island, New Jersey, and upstate New York, as one unified system.

Such a model would allow more trains on fewer tracks and cost significantly less to operate, he said.

“Trains inefficiently sit in train yards, or go back to their points of origin empty,” he said. The model Turvey foresees “is a faster, cheaper, and more sustainable means of transportation. It’s what London, Hong Kong, Tokyo, Singapore, Madrid, Munich, Los Angeles, Philadelphia, Toronto all use.”

Shortly after the lawsuit was filed, Steven Roth, the chief executive of Vornado, publicly expressed hesitation on the project for the first time, telling investors in an earning call that “the headwinds in the current environment are not at all conducive to ground-up development.”

Despite the comments, Hochul has continued to express her unwavering support for the project, telling reporters in a press conference on Nov. 2 that despite the legal action she is “committed to this because that neighborhood needs to be lifted up.”

“It should not be looking like a ‘skid row’ neighborhood,” she added.