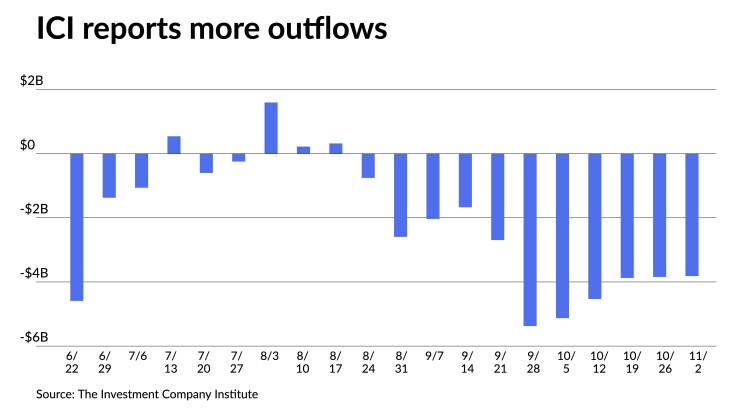 Municipals were firmer 10 years and in Wednesday while another week of mutual fund outflows clocked in at $3.8 billion.

“U.S. stocks declined as the midterm election results are still not clear, but still seems to favor a divided government outcome,” noted Edward Moya, senior market analyst at OANDA. “Wall Street is having an election hangover that most likely saw an end to Biden’s blue wave. ​Traders can now go back focusing on everything with inflation.”

Should Republicans manage to win control of one or more chambers of Congress, “this divided government would yield little near-term market reaction,” noted Morgan Stanley strategists Michael Zezas and Ariana Salvatore, “but support bond markets over time by limiting fiscal expansion potential and hence the risk that monetary policy would have to tighten more than expected to fight inflation.”

Municipal lobbyists in Washington say gridlock may be a good thing for municipals heading into next year. While some congressional seats remain tossups, voters approved some of the largest bond ballot measures across the country.

Triple-A muni yields fell one to four basis points Wednesday, depending on the curve, while USTs saw yields fall by four to eight basis points.

For municipals, it was another day of mutual fund outflows with the Investment Company Institute reporting that investors pulled $3.816 billion from mutual funds in the week ending Nov. 2 after $3.843 billion of outflows the previous week. That brings year-to-date losses to $123.3 billion.

Exchange-traded funds saw another week of inflows at $1.108 billion after $1.007 billion of inflows the week prior, per ICI data.

There remains a “combination of reasonably attractive valuations on a relative basis, especially at long maturities,” he said. Beyond the 10- to 12-year maturity point, implied breakeven tax rates between municipal bond yields and other comparable maturity yields start to look pretty attractive, he said.

State and local governments’ balance sheets are in “excellent shape,” having benefited from a surge of federal government transfers during the pandemic and income tax revenue coming back more quickly than expected when they were making their budget plans.

“They’re sitting on big cash pools in the state and local government sector,” he said. “So it looks quite sound, and especially at the long end of the yield curve, valuations look reasonably attractive.”

Even though returns remain in the black in November, it’s been the worst start of the year for the bond market since the Great Depression, said Cooper Howard, a fixed-income strategist focused on munis at Charles Schwab. Fortunately, he said it’s unlikely to repeat.

Returns, he said, “have been historically weak this year for two primary reasons — starting yields were very low and the Federal Reserve’s pace of rate hikes has been very rapid.”

Since March, Howard said, “the Fed has increased the federal funds target rate five times, pushing it up from near zero to a range of 3% to 3.25%.” While this has been “the fastest and most aggressive pace of tightening going back to the early 1980s,”  he believes “the pace of rate hikes will slow and ultimately stop, which should limit the upside for longer-term bond yields (which move inversely to bond prices).”

Now that yields have reset at much higher levels, Howard said “the blow from price declines should be cushioned by higher coupon income.”

Bond returns, he noted, “are mostly comprised of a coupon return and changes in prices,” adding that “coupon returns are always positive and historically have provided a buffer from falling prices.”

Since “yields were so low to start the year and rose very sharply, the coupon return wasn’t large enough to offset the decline in prices, resulting in nearly the worst 12-month total return for the bond market since the 12-months ending in 1977,” Howard said.

Treasuries were closed out better.