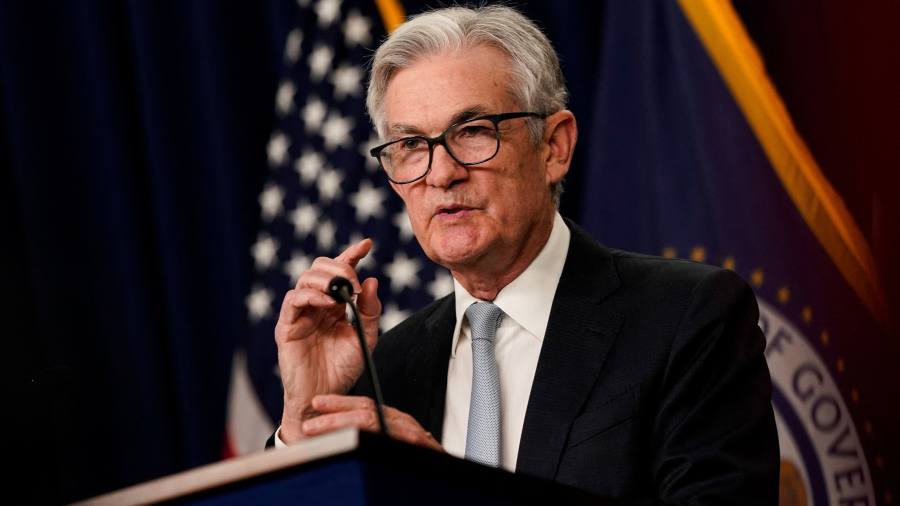 Jay Powell warned US interest rates would peak at a higher level than expected even as he held out the possibility of the Federal Reserve slowing the pace of its campaign to tighten monetary policy.

Speaking after the central bank increased its main interest rate by 0.75 percentage points for the fourth time in a row, Powell warned the Fed had “some ways to go” in its quest to tame soaring prices and pointed to a string of economic reports suggesting it has yet to make a dent in inflation.

“Data since our last meeting suggests that the ultimate level of interest rates will be higher than expected,” the Fed chair added.

However, Powell also hinted that policymakers are willing to entertain the possibility of adopting a less aggressive increase at the Fed’s next meeting in December. “That time is coming, and it may come as soon as the next meeting, or the one after that.”

Importantly, Powell said the Fed did not need to see several months of lower inflation reports before switching to smaller increases.

“We do need to see inflation coming down decisively and good evidence of that would be a series of down monthly readings,” he said. “But I’ve never thought of that as the appropriate test for slowing the pace of increases.”

In a statement before Powell spoke, the central bank said it would “take into account the cumulative tightening” implemented so far as well as the “lags with which monetary policy affects economic activity and inflation”.

Markets struggled to interpret the central bank’s stance, with stocks jumping after the statement was released, then sinking after Powell warned in his press conference that rates would top out at a higher “terminal” level. The S&P 500 index closed down 2.5 per cent in New York while the tech-heavy Nasdaq fell 3.4 per cent.

Powell was speaking after the Federal Open Market Committee voted unanimously to increase the federal funds rate to a target range of 3.75 per cent to 4 per cent.

The central bank said “ongoing increases” in the fed funds rate would be necessary to have a “sufficiently restrictive” effect on the economy and bring inflation back to the Fed’s longstanding 2 per cent target.

The decision to press ahead with another 0.75 percentage point rate rise comes against a backdrop of mounting evidence that the most acute inflation problem in decades is not abating.

This is despite signs that consumer demand is starting to cool and the housing market has slowed significantly under the weight of spiralling mortgage rates, which last week rose above 7 per cent.

Given how far the Fed has already lifted rates — from near-zero as recently as March — top officials and economists are having increasingly urgent discussions about when the central bank should slow the pace of its rate rises, particularly because changes to monetary policy take time to filter through the economy.

The Fed first introduced the notion of slowing down “at some point” back in July, and forecasts published at the September meeting suggest support for such a move in December. At September’s meeting, most officials projected the fed funds rate reaching 4.4 per cent by the end of the year, indicating a step down to a half-point rate rise next month.

Economists are concerned that by prolonging its aggressive tightening programme, the Fed risks triggering a more pronounced economic downturn than is necessary, as well as instability in financial markets. Some central bank watchers warn recent flashpoints in the UK government bond market, which required the Bank of England to step in, offer a cautionary tale.

Democratic lawmakers have also called on the Fed to back off of its aggressive approach.

However, Powell will be under pressure to reassure economists and investors that slowing the pace of rate rises does not mean a reduced commitment to stamping out price pressures. To that end, many economists expect the Fed to eventually back rate rises that exceed the 4.6 per cent peak level planned in September. A benchmark policy rate of at least 5 per cent is now expected to be required to tame inflation.

“This statement and press conference allows the Fed to keep its options open . . . This is a paradigm shift where Powell is getting himself out of a necessary increase of 75 basis points,” said Jamie Anderson, head of US trading at Insight Investment.

“Everybody wants to see the end of the hiking cycles, but it is impossible to see that until we start to see inflation actually start to come down,” he added.