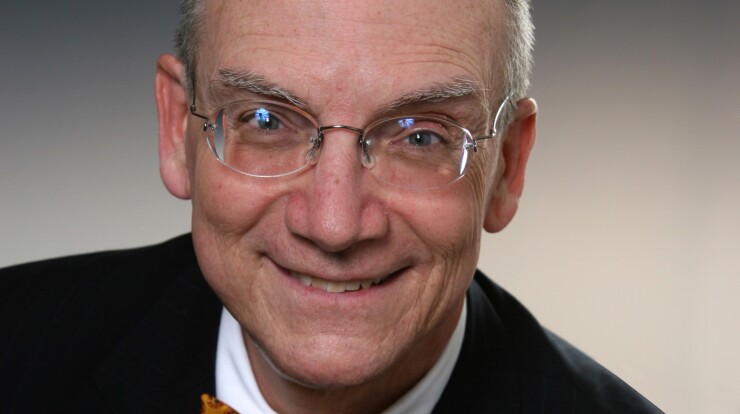 If the $4 trillion municipal bond market is like a small town, where everyone knows everyone, then Tim Schaefer is its West Coast mayor.

Schaefer stepped down after more than seven and a half years as California’s deputy treasurer for public finance two weeks ago — quietly, he said, because he didn’t want “his retirement to be disruptive to the principal.”

The long-time financial advisor, John Chiang tapped Schaefer for the position after winning the 2014 election for treasurer, and he continued during Treasurer Fiona Ma’s administration after she won the job in 2018. Chiang didn’t seek a second term, running unsuccessfully for governor instead.

Ma is running for a second term as treasurer and looks headed for another landslide victory, this time over Republican Jack Guerrero.

Schaefer’s job won’t be the only change if Ma gets re-elected on Nov. 8. She has three open positions to fill, but said she would wait until after the election to announce changes.

Schaefer, 75, said he had simply decided it was time to retire.

“When John (Chiang) was elected, he asked me to make a promise that I would serve two terms,” Schaefer said. “Here I am at the end of two terms, which is what I originally committed to. Treasurer Ma has signaled she has wanted to make changes in her administration. Her chief deputy left at the end of August. I just felt this was the right time.”

Both Ma and Schaefer have reputations for being strong-willed.

At The Bond Buyer’s California Public Finance conference in September, a panelist made a joke about Schaefer yelling at the finance team during protracted discussions on one of the state’s deals.

But nobody questions Schaefer’s encyclopedic knowledge of bonds.

Chiang’s communications director Marc Lifsher once referred to Schaefer as the professor, adding that he had learned a lot about complicated bond transactions by working with Schaefer.

Schaefer said he hasn’t decided what he will be doing next, but it won’t be disappearing to play golf and sit on his patio in a rocking chair.

“I still have a lot of energy for somebody my age,” Schaefer said.

He was involved in some of the State Treasurer’s Office’s biggest public policy programs related to bonds.

The committee plans to produce recommendations next year on both best practices for issuing green bonds and the method for disclosing both pre-sale and post-sale information on the Municipal Securities Rulemaking Board’s EMMA website.

That committee was originally formed under Chiang to encourage more California issuers to label bonds green, but has become more focused on disclosure.

During Chiang’s tenure, the treasurer’s office put together two green bond conferences and a report was released based on the findings from those conferences.

“We go back to those documents a lot,” Wooley said.

Schaefer was involved in creating the green bond workshops and the resulting report.

“I am very proud of the contribution I have made with green bonds,” Schaefer said.

One of Schaefer’s contributions to the green bond committee was to make sure whatever recommendations come out of the committee make it easier for smaller issuers who don’t have the same depth of finance staff as larger issuers.

Ma said whoever is named to replace Schaefer will take over his position representing the treasurer’s office on that committee. Schaefer said he might stay on as a private citizen if Wooley asks.

One of the most challenging projects for Schaefer was working on the project to help bank marijuana businesses.

He admits now that he didn’t agree with the legalization of marijuana, but Chiang had convinced Schaefer that they serve at the people’s pleasure, and it was the voters’ will that it be legalized. After that conversation, Schaefer agreed to be the lead on finding banking solutions for the marijuana industry to aid its conversion to a legal industry.

“I came up with solutions,” Schaefer said. “Unfortunately, none of that has come to fruition.”

Schaefer is a registered Democrat who resides in Sacramento. He moved there with his wife, Katherine, who also works in finance, when he took a job as fiscal policy advisor in the controller’s office in 2014, when Chiang was state controller. Prior to that, he had lived in Los Angeles for 27 years.

“I am not going to retire and go away, Schaefer said. “I’m too stubborn to do that. I suspect I will get involved in other ways. But I am still assessing that. Haven’t officially hit retirement date. It’s at the end of year. I’m burning off unused leave time.”

He worked with CDIAC on that project expected to formally launch in June.

“There are many things I worked on that I look back on with a sense of accomplishment, but this one is the one I am most proud of.”

Prior to serving in government Schaefer founded Orange County-based public finance advisory firm Magis Advisors after serving as president at a similar firm in Southern California and was a regional vice president with a national financial advisory practice.

As a consultant, Schaefer said he was often called upon to assist the state with the structuring and sale of complex cash flow borrowings, the largest of which exceeded $10 billion. He began his 50-plus year career as a municipal bond salesman, syndicate manager, and secondary market trader. He managed the national short-term municipal trading desk at Chemical Bank in New York and the public finance division of Bank of America.

He also served more than twenty years on the Technical Assistance Committee to the California Debt and Investment Advisory Commission (chaired by the California Treasurer) and three years as a private sector advisor to the Standing Committee on Governmental Debt of the Government Finance Officers Association.

He is a co-author of the California Public Funds Investment Primer and is a frequent speaker in the field of public finance.

Working for the treasurer’s office “was a tough job,” Schaefer said, “but I was glad to have had it.”

He added that he will let others determine how well he did, but “I think I have some things I can be quite proud of.”

Mortgage Demand Down Up To 88% From This Time Last Year
The future of parking is in New York — and it costs at least $300,000 per space
Elon Musk Confirms Bankman-Fried Owns 0% of Twitter Despite Reports Claiming a $100M Stake
Port Authority plans to increase capital spending next year
4 Iron Condor Setups for Option Traders (Skewed, Unbalanced, Wide, and Iron Butterfly) Ep 194