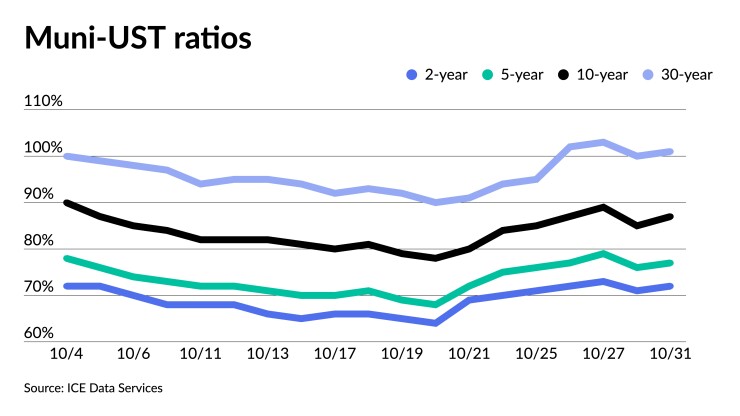 Municipals were steady to slightly firmer in spots to kick off a lighter new-issue calendar due to the Federal Open Market Committee meeting. U.S. Treasuries extended Friday’s losses on the short end, while equities ended down.

Triple-A municipal yields fell one to two basis points while UST saw losses of eight on the short end and one out long.

“Supply for this week is expected to be very light and demand will get a modest boost from $24 billion of principal and interest that will be paid out on Tuesday,” said CreditSights strategists Pat Luby and John Ceffalio.

This week’s supply totals only $2.7 billion.

“Chalk it up to Halloween Monday or the fact that muni rates are puzzlingly on the rise; whatever the reason, anyone looking for more clarity through price discovery and less pressure on the secondary market may be out of luck for now,” said Eric Kazatsky, head of municipal strategy at Bloomberg Intelligence.

Bond Buyer 30-day visible supply sits at $9.39 billion. The lower projection “indicates that a typically busy time of year for public-finance bankers may be veering from normal,” he said.

And with the Federal Open Market Committee meeting this week and the next week shortened by the bond market observance of Veterans Day, CreditSights strategists said investors should be prepared for two weeks of subdued new issuance.

“Last week’s tumultuous adjustments to the benchmark yield curves resulted in the tax-exempt muni indices dramatically underperforming the UST and corporate bond indices,” Luby and Ceffalio said. However, the week ended on a positive note as yields held firm on Friday, and flows into the muni exchange-traded funds were strong.

But the growing disconnect between USTs and AAA tax-exempts became even more apparent over the past week, Kazatsky said.

“U.S. Treasury rates snapped an almost 12-week losing streak on hopes that prior Fed hikes have finally cooled the economy and a slowdown in tightening may be in sight,” he said.

Meanwhile, “tax-exempt rates shot higher, seemingly taking the other side of that market, and underperformed on the week,” Kazatsky said noting, “the largest margin of underperformance came in the long end of the curve as US Treasuries dropped 20 bps and munis rose 10 bps.”

Jason Wong, vice president of municipals at AmeriVet Securities, said the 10-year munis is at its highest since January 2011.

Muni ratios also “rose sharply with ratios on 10-year notes now yielding 84.91% of Treasuries compared to the prior week when the ratios were at 79.71%,” he said.

And as muni-UST ratios rise, Kazatsky said “more buying from the sidelines would be expected, yet that hasn’t seemed to be the case yet.”

And with the rising yields, investors pull their investments out of muni mutual funds, which saw $1.8 billion flow out of the funds last week, according to Refinitiv Lipper. This marks the 12th consecutive week of outflows.

“Though fund flows aren’t the be-all and end-all of muni sentiment, weeks of multibillion-dollar outflows have weighed heavily and thrown into question stronger technicals that typically support the tax-exempt market,” Kazatsky said.

“Secondary trading for the week totaled to roughly $55.58 billion as the selloff continues as investors continue to expect a few more rate hikes from the Fed,” Wong said.

With the selloff in munis, there continued o be large amounts of customer bids-wanted again last week with a total of just over $10.5 billion with four days of having over $2 billion, per Bloomberg.

“The high number of bids wanted has caused an increased amount of selling pressure in the markets causing more volatility as well,” he said.

Primary to come:
The City and County of Denver, Colorado (Aa3/AA-/AA-/), is set to price Thursday for and on behalf of its Department of Aviation $850 million of fixed rate non-AMT, fixed rate AMT and term rate AMT airport system revenue bonds. Barclays Capital.

How bad is the current state of crypto? On-chain analyst explains
The future of parking is in New York — and it costs at least $300,000 per space
Warren Buffett explains his $750 million charitable donation on Thanksgiving eve
4 Iron Condor Setups for Option Traders (Skewed, Unbalanced, Wide, and Iron Butterfly) Ep 194
These are shaping up to be the best and worst luxury real estate markets for 2023