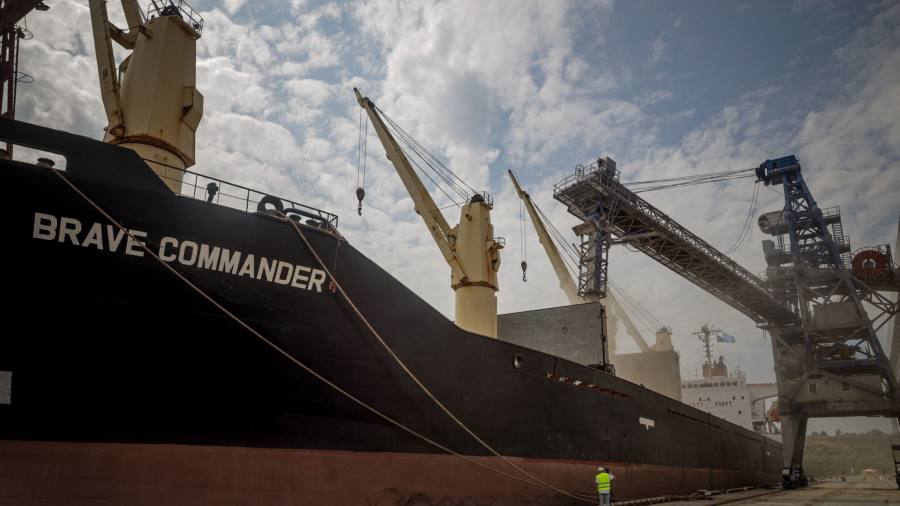 President Vladimir Putin’s decision to pull the plug on the wartime deal that unblocked the passage of millions of tonnes of grain via southern Ukraine will lead to a fresh jump in price, experts warned, with “catastrophic consequences” for poorer nations already facing acute food shortages.

The US called Moscow’s suspension on Saturday of its participation in the UN-backed deal with Kyiv an “outrageous” action that risked fuelling starvation. Moscow linked its decision to a weekend attack on ships in the port of Sevastopol, part of the territory Russia annexed from Ukraine in 2014. Ukraine called this a “false pretext”.

The Kremlin’s announcement surprised grain traders and analysts who, while doubtful that the deal would have endured beyond its mid-November deadline, had not expected a sudden termination.

Arif Husain, chief economist at the UN World Food Programme, said “dozens of countries” would be affected by new disruption to supply from Ukraine, a major global exporter of grain and other food products. “In the good times [this] would be bad, but in the current state of the world, it’s something that needs to be resolved as soon as possible,” he said.

Ukraine’s infrastructure ministry said 218 ships had been immediately affected. This included 95 that had already left its ports and were waiting at the inspection site before unloading, 101 waiting for inspection before collecting Ukrainian grain, and a further 22 that were loaded up and ready to set sail.

The International Rescue Committee warned of the “catastrophic consequences of Russia suspending its participation” in a deal that was thrashed out this summer in Istanbul.

Under the plan, Moscow guaranteed safe passage for cargo ships carrying grain coming from ports in the Black Sea that had previously been blocked by its war in Ukraine. The Turkish defence minister on Sunday said he was in talks with his Russian and Ukrainian counterparts in an effort to save the deal.

Specialist outlet Fastmarkets Agricensus on Sunday reported “panic” in these ports as international vessels already docked and loading feared they could get trapped now that Moscow had suspended the safe passage corridor.

“The UN-brokered deal brought a ray of hope — now this hope is shattered again,” said Shashwat Saraf, IRC’s East Africa emergency director, saying the poorest nations such as Yemen and Somalia would be particularly affected. East Africa relies on Russia and Ukraine for much of its wheat imports, he said.

Ukraine’s foreign minister Dmytro Kuleba said the suspension, on a “false pretext of explosions 220km away”, would block 2mn tons of grain — enough to feed over 7mn people.

US secretary of state Antony Blinken said the deal had already allowed 9mn tonnes of food products to be exported, bringing down global prices that soared following Russia’s invasion of Ukraine in February, and urged “all parties to keep this essential, life-saving initiative functioning”.

Josep Borrell, EU foreign affairs chief, also called on Moscow to reverse its decision, saying it “puts at risk the main export route of much -needed grain and fertilisers to address the global food crisis” caused by Putin’s war.

Moscow defended its actions, with the Russian ambassador to the US arguing that the “truly outrageous” move was the US failure to criticise the attack on Sevastopol.

The attack, which appears to have targeted Russian warships, comes eight months into Russia’s full-blown invasion of Ukraine.

Russia has denied that its attack on Ukraine caused price rises or exacerbated food shortages. It said over the weekend that the country was ready to supply 500,000 tonnes of grain directly to poor countries in the near future, the Tass news agency reported, citing the agricultural ministry.

This was seen by some as an attempt by Moscow to preserve strained relations with countries in the global south, whose food supplies have been deeply affected by the fallout from Russia’s decision to invade Ukraine.

Putin has in recent weeks expressed unhappiness with the deal, claiming it was not benefiting the “poorest countries”.

However, the UN has not billed the agreement as intended to send grain directly to poorer nations, but one that made grain more accessible to all by lowering market prices.

The Russian president’s increased disapproval has coincided with a series of military defeats for his forces, and the suspension of the deal comes as a counter-offensive in the southern Kherson region gathers pace.

“Why is Moscow disrupting the grain deal now? The answer is: Putin needs leverage as things go south for him on the battlefields in Ukraine, so the threat of global food crisis needs to be put back in the Russian toolbox of coercion and blackmail,” wrote Alexander Gabuev, senior fellow at the Carnegie Endowment for International Peace.

But he also warned the strategy could backfire: “The killing of the grain deal will create rifts between Russia and powerful players like Turkey and Saudi Arabia.”