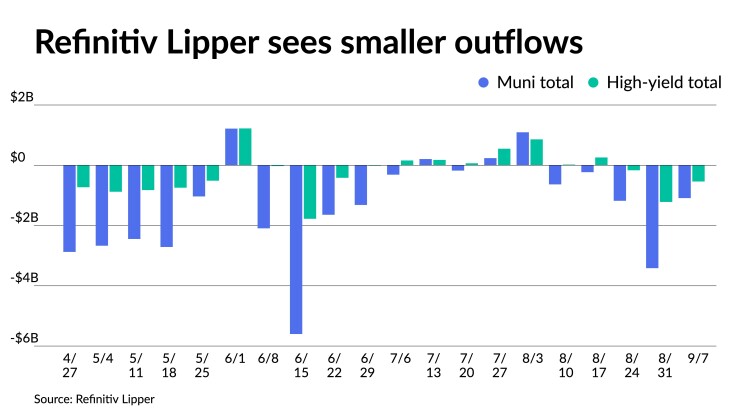 Municipals were little changed to a touch firmer out long Friday while U.S. Treasuries sold off on the front end of the curve and the 10-year UST rose back above 4%. Equities rallied buoyed by tech stocks.

Triple-A municipal yields fell up to two basis points, depending on the scale, while UST yields rose eight to 15 basis points 10 years and in.

Late Thursday, Refinitiv Lipper reported $1.798 billion of outflows from municipal bond mutual funds for the week ending Wednesday after $2.611 billion the week prior.

“The muni AAA curve bear steepened this week, pushing the relative richness of munis back to a slightly cheap status,” they said. “The abrupt move in munis reflects low muni/Treasury ratios at the beginning of the week, sizable primary market volumes, hedging difficulties and some doubt as to the sustainability of the Treasury market rally.”

“Much like Treasury yields a week ago, these current muni AAA rates were last seen in 2013,” the report said. ”The attractiveness of these yields are in an absolute sense, as well as relative to taxable bond markets.”

Next week’s Federal Open Market Committee meeting “remains the focus for most investors, and a 75bp hike has been fully priced in,” according to Barclays PLC.

What comes next is “what investors are concerned about the most, hoping for any signs of a slowdown of the pace of hikes after next week, but they might be disappointed,” said Barclays strategists Mikhail Foux, Clare Pickering and Mayur Patel.

While they expect a fifth 75 basis point hike in December, fed fund futures only imply a 30% probability, which is less than the 75% probability of just a week ago, they said.

Generally, the adjustment in triple-A levels and higher muni yields this week are “forcing issuers to bring deals with higher coupons, as a sizable portion of long 5% [investment grade] bonds is trading below par, and some bonds have actually fallen below de minimus despite their relatively high coupons.”

In the past two months, high-coupon, investment-grade bonds (>5%) are back in fashion, with a 25% share of total supply versus 7% in the first eight months of the year, according to Barclays. The share of 4.75%-5% bonds has also increased unsurprisingly as very few low-coupon bonds are being issued, which is not a surprise, they said.

“The spread premia between 5% coupon bonds and those with higher coupons has increased just slightly for bonds that are still trading above par (close to 4-5bp for every 0.25% of a coupon); but for bonds trading below par, this differential can be much more sizable as we saw this week (10-12bp for each 0.25%), which seems quite high to us,” Barclays strategists said.

Calendar drops
Investors will be greeted Monday with a new-issue calendar estimated at $2.718 billion.

There are $2.462 billion of negotiated deals on tap and $255.8 million on the competitive calendar.

The negotiated calendar is led by $850 million of airport system revenue bonds from the City and County of Denver, Colorado for and on behalf of its Department of Aviation. Other notable deals include $323 million from the New York State Environmental Facilities Corporation and $210 million from the Public Finance Authority, Wisconsin.

Primary to come:
The City and County of Denver, Colorado (Aa3/AA-/AA-/), is set to price Thursday for and on behalf of its Department of Aviation $850 million of fixed rate non-AMT, fixed rate AMT and term rate AMT airport system revenue bonds. Barclays Capital.

During the retail order period for the tax-exempts, the TFA received more than $372 million of orders, of which about $288 million was usable. During the institutional pricing period, about $1.5 billion of orders were received, making the deal almost 2.1 times oversubscribed.

Proceeds from the sales will be used to fund capital projects and to convert certain floating-rate debt to fixed-rate debt.