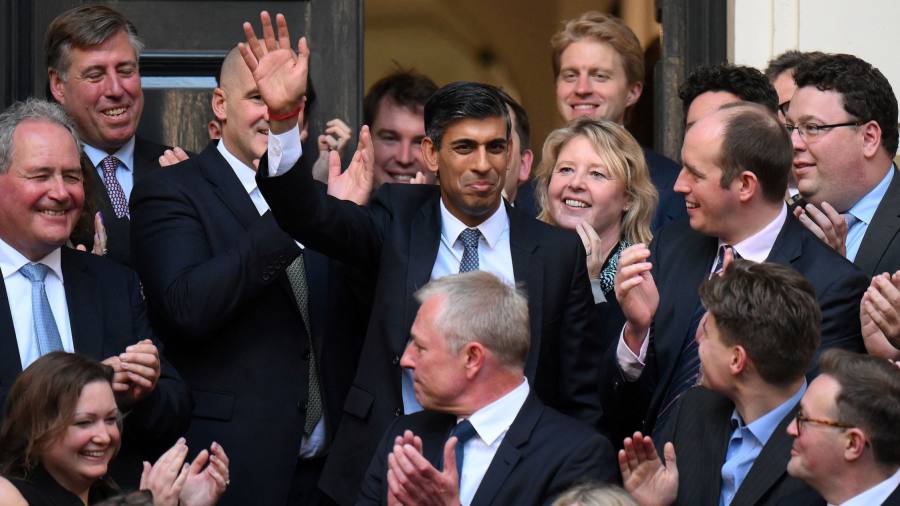 Rishi Sunak will on Tuesday enter Downing Street as Britain’s youngest prime minister in modern times and its first non-white leader, with a vow to get to grips with the “profound economic challenge” facing the country.

Sunak is being urged by chancellor Jeremy Hunt to press ahead with a new debt-cutting plan next week, ahead of a crucial interest rate-setting Bank of England meeting on November 3.

Sunak, former chancellor, was crowned Tory leader on Monday after Boris Johnson and Penny Mordaunt, his two challengers, dropped out of the contest. He becomes Britain’s third prime minister in two months.

Liz Truss, who resigned after a calamitous 44-day spell as prime minister, will hold her final cabinet meeting on Tuesday morning before tendering her resignation to King Charles.

Sunak, 42, will then travel to Buckingham Palace to meet the monarch before returning to Number 10 at about 11.30am to start forming a cabinet; the new prime minister’s allies expect Hunt to stay on as chancellor.

Dave Ramsden, the BoE’s deputy governor, noted that gilt yields were now not far above their level before Truss’s disastrous “mini” Budget on September 23, but only after a series of policy U-turns.

“Credibility is being recovered, at least on that benchmark measure, but that has to be followed through,” he said.

Tory MPs hope that an economic team of Sunak and Hunt — both seen as fiscal conservatives — will reassure markets and help to hold down borrowing costs, feeding through into lower mortgage bills.

“If we can knock £10bn off government borrowing costs and 1 per cent off people’s mortgage bills, we will have done some good today,” said former cabinet minister Gavin Williamson, a key Sunak supporter.

Hunt was said by government insiders to be “pushing hard” to set out his medium-term fiscal plan on October 31, as planned. One said: “He thinks it’s really important to have it before the BoE meeting on November 3.”

The plan aims to fill a fiscal hole of about £40bn. Hunt is proposing a mix of tax rises and tight spending curbs as part of a painful five-year programme to bring debt under control.

Sunak told Tory MPs that the country was “in a fix” and the Conservative party faced “an existential moment”. Britain’s first Hindu prime minister ended the private meeting by wishing colleagues “Happy Diwali”.

He told MPs his new cabinet would include talent from across the party. Former ministers including Michael Gove and Oliver Dowden have been tipped for comebacks by Sunak supporters.

Later, in a brief victory speech, Sunak told staff at Tory headquarters: “The UK is a great country but there is no doubt we face a profound economic challenge. We now need stability and unity, and I will make it my utmost priority to bring our party and our country together.”

Labour and Liberal Democrats said there should be a general election.

Mordaunt, House of Commons leader, quit the contest shortly before the 2pm deadline for nominations, having secured the backing of 90 MPs — 10 votes short of the 100 required to enter the contest.

Her withdrawal meant that Sunak was the only leadership candidate, so the contest ended without the need for an online vote by Conservative party members.

Sunak is younger than Tony Blair and David Cameron when they became prime minister. His Indian grandparents emigrated to Britain from east Africa and he grew up in Southampton.

Although he won the overwhelming backing of Tory MPs, he is a divisive figure in the Tory party, with many supporters of Johnson accusing him of undermining his premiership when he quit as chancellor in July.

Sunak now faces a daunting in-tray, including a crisis in the public finances, high inflation, stretched public services, industrial unrest, soaring energy bills and even the possibility of blackouts in the new year.

Financial markets responded positively on Monday to Sunak’s expected “coronation” in what has been dubbed in the City of London “the dullness dividend” following the turmoil unleashed by Truss.

Gilts and sterling rallied on Monday following Johnson’s exit from the race, as investors bet that Britain was likely to stick with policies outlined by Hunt that have calmed markets in recent days.

The 10-year gilt yield sank 0.23 percentage points to trade at 3.82 per cent, reflecting a sizeable price rise. The pound climbed by as much as 0.9 per cent against the dollar in early trading, before falling back amid a broad rise for the US currency.