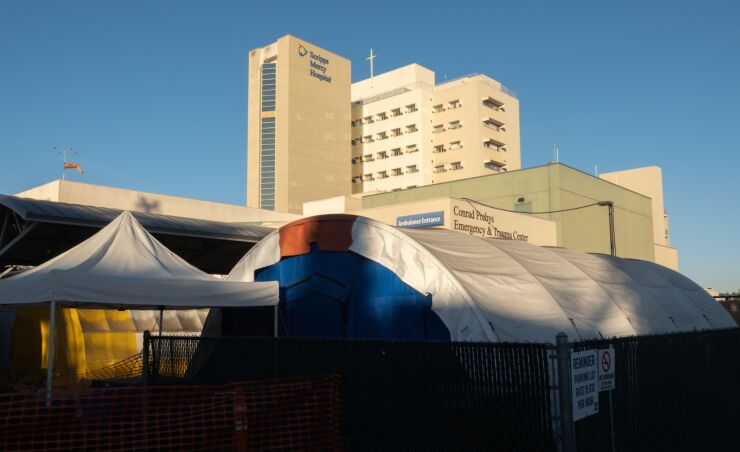 Three not-for-profit health systems cut the number of ratings they pay for amid a backdrop of strained operating conditions with margins squeezed by sector-wide expense pressures.

SSM Health and OSF Healthcare System in the Midwest and Scripps Health in California all confirmed their decision to drop Moody’s Investors Service in emails. SSM and Scripps published disclosures on the Municipal Securities Rulemaking Board’s EMMA disclosure website.

Borrowers have been increasingly willing to drop at least one rating agency in actions that impact all the rating agencies and multiple sectors, market participants said.

Moody’s published reports earlier this month withdrawing the three ratings citing a lack of sufficient information, a common avenue market participants say borrowers use to drop a rating by simply forgoing the request for a rating in the new issue process.

“The decision by Moody’s to remove their rating of SSM Health was based on a request we issued last month,” SSM Health spokesman Patrick Kampert said in an email noting the system’s Sept. 19th EMMA posting. Only Missouri-based SSM Health confirmed the decision was directly tied to efforts to reduce expenses.

“In short, we conducted an analysis of industry best practices and found that many of our peers elected to utilize only two ratings,” Kampert said. “Given continued cost pressures within the industry, we felt it was appropriate to reduce our number of ratings to two and have elected to move forward with S&P and Fitch as we believe they both possess a strong understanding of the evolving healthcare landscape and specifically the markets in which SSM Health operates.”

The decision to cut out one rating out of the mix is a notable trend that’s played out in recent years, although there was an uptick in the second and third quarters to use additional ratings with concerns about credit on the rise, said Lisa Washburn, chief credit officer at Municipal Market Analytics.

“That said, hospitals have been paring back their usage of ratings meaning more are dropping the third rating and probably some are dropping the second purely for economic reasons. They generally have relatively sophisticated, non-political financing teams that are evaluating the cost/benefit of the ratings on debt,” Washburn said.

“The most value arguably comes from the first rating and maybe second in terms of pricing, but I think that hospital issuers have been weighing what they get in terms of lowering their cost of capital for the third rating,” Washburn said.

The not-for-profit healthcare sector saw its margins tumble as the COVID-19 pandemic inflicted deep operating wounds. While a recovery began last year, new variants, inflation and a labor shortage felt most acutely with nursing staff have dragged margins back down this year.

There’s a cost to maintaining ratings with three separate agencies that have their own information requests, analysts that need to be met and communicated with, and the greater risk of a rating change whether it’s through credit quality or a change in methodology, Washburn said.

Moody’s writes in the three reports that it has “decided to withdraw the ratings because it believes it has insufficient or otherwise inadequate information to support the maintenance of the ratings,” in line with its policy for the withdrawal of credit ratings. Moody’s declined further comment.

“OSF HealthCare previously contracted with Fitch, S&P and Moody’s for a credit rating, but decided all three were not necessary. We made the decision to terminate our contract with Moody’s earlier this year,” OSF media relations supervisor Shelli Dankoff said in an email.

Moody’s published its withdrawal of Illinois-based OSF’s obligor rating of A3 rating and stable outlook Oct. 7 but maintained its Aa1/VMIG 1 letter of credit backed enhanced ratings.

Earlier this week, Moody’s downgraded one long term rating on the system’s floating-rate debt from 2018 issues, underscoring the complexity associated with the removal of ratings on debt that remains outstanding.

They were previously based on a joint default analysis that had included OSF but is now based on the direct pay LOC, the structure and legal protections of the transactions and Moody’s evaluation of the credit quality of each bank, Moody’s said in Monday’s downgrade.

Fitch upgraded the system in April to A-plus from A and assigned a stable outlook while S&P affirmed its A rating and stable outlook. OSF operates 15 acute-care hospitals.

Moody’s Oct. 7 report on the withdrawal of the A1 rating and stable outlook followed SSM Health’s September 19th EMMA disclosure.

Moody’s published its withdrawal of Scripps’ Aa3 rating along with its top VMIG-1 short term rating and stable outlook “for lack of sufficient information” Oct. 10.

Scripps Health carries AA ratings from both Fitch and S&P.