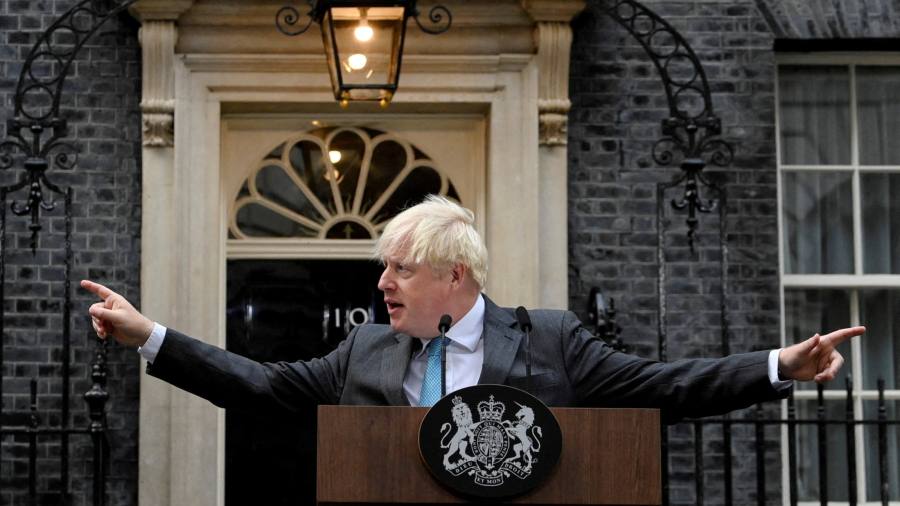 Investors and some Conservative MPs took fright on Friday as Boris Johnson considered running for a second stint as UK prime minister, with warnings that he risked triggering further political and economic chaos.

Johnson’s allies are scrambling to secure the 100 nominations needed from Tory MPs to enter Monday’s ballot to replace Liz Truss, who resigned on Thursday after only six weeks in power.

Johnson, who was forced to quit as Tory leader in July after criticism of his personal conduct, could square up against his former chancellor and rival Rishi Sunak, risking further Tory infighting.

Lord William Hague, former Conservative leader, said a Johnson comeback was “the worst idea” he had heard in 46 years of party membership, telling Times Radio that it would put the party into a “death spiral”.

Jane Foley, head of currency strategy at Rabobank, said Johnson’s previous time in office had been characterised by “a lack of leadership from a government very distracted by one scandal after another”, and “the chance that that could come back is not going to be welcomed by markets”.

The 10-year gilt yield rose 0.22 percentage points to 4.13 per cent on Friday, reflecting a fall in price, before edging back to 4.06 per cent. The pound fell as much as 1.4 per cent against the dollar before recovering its losses.

Simon French, economist at Panmure Gordon, said the UK would benefit from a “dullness dividend” if the party picked Sunak to replace Truss. Sunak’s allies expect him to keep Jeremy Hunt as his chancellor.

He predicted that a team of Sunak and Hunt would close the spread between UK gilts and other sovereign debt held by other G7 countries by 50 basis points, which would equate to a £7bn reduction in the 2026/27 fiscal gap.

Sunak quit as Johnson’s chancellor in July, claiming his former boss was unable to take tough fiscal decisions. “Our people know that if something is too good to be true, it is not true,” he said in his resignation letter.

Berenberg analysts said there were greater market risks from a Johnson government and that either Sunak or Penny Mordaunt, the leader of the House of Commons who declared her candidacy on Friday, would probably preside over a sensible, predictable centre-right administration.

In a note to clients, the bank added: “Given that a majority of Conservative MPs probably do not want Johnson as their leader, the prospects of mass resignations and a further descent into chaos would loom large.”

Allies of Johnson say they have privately approached Sunak to join forces in an attempt to present a united front and that “any administration would be fiscally responsible”.

Sunak has been speaking to colleagues to establish how he could be “a unifier”, his allies said. By 6pm on Friday, Sunak had 70 publicly declared backers, Johnson 30 and Mordaunt 17. Mordaunt hopes to emerge as a unity candidate.

Johnson, who quit in July amid criticism of his personal conduct, is still popular with grassroots Tory members, who will have the final say if two candidates emerge from Monday’s round of voting among MPs.

Johnson’s backers, including defence secretary Ben Wallace, insisted his return would address voters’ doubts about the government’s legitimacy, as he had won a mandate to govern in the 2019 general election. “That’s very important to bear in mind,” Wallace said.

Tom Pursglove, MP for Corby, said: “Many of our supporters felt let down when he was removed and will arguably feel cheated again if he isn’t on the ballot.”

But Sir Roger Gale, a veteran MP, said he would quit if Johnson returned. He pointed out that the Commons privileges committee had not yet concluded its investigation into whether Johnson lied to parliament about parties in 10 Downing Street during Covid lockdowns.

If found guilty of misleading parliament, Johnson could be suspended and face a by-election. “We could be back choosing another prime minister in January,” said one despairing ex-cabinet minister.

A poll by People Polling has put the Conservative party at its lowest-ever support since modern polling began, at 14 per cent against Labour’s 53 per cent.

The contest to become Britain’s fourth prime minister in four years has been accelerated to take only a week. Under the new rules, no more than three candidates will be able to reach the first ballot on Monday afternoon, with the final two put to an online vote of party members for a result by next Friday.