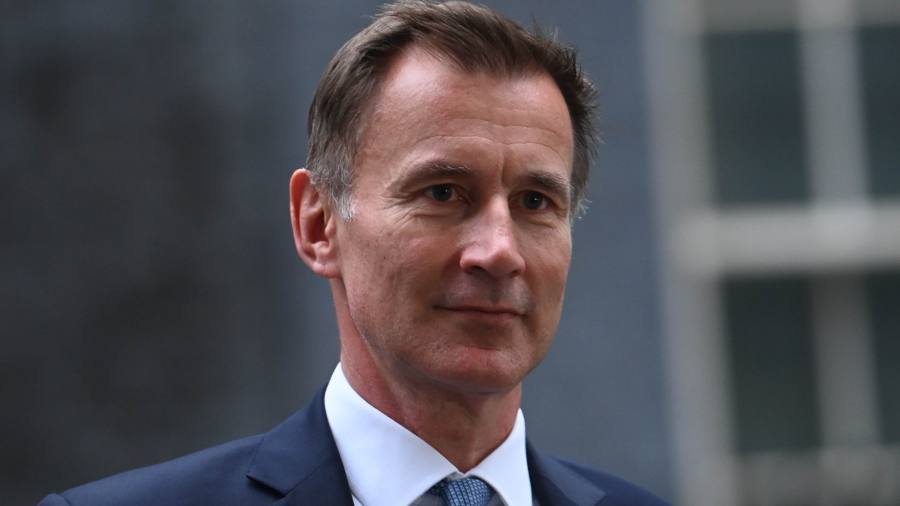 Chancellor Jeremy Hunt is preparing to raid the profits of banks and energy companies in an attempt to fill a £40bn fiscal hole through a mix of tax rises and public spending cuts.

Hunt’s Budget on October 31 is due to include big tax rises, with allies of the chancellor saying they expect him to target the earnings of lenders and oil and gas companies. He has spoken of “eye-wateringly difficult” decisions.

The chancellor told a sombre cabinet meeting on Tuesday that ministers would have to exert tight spending control, as he tries to prove to financial markets that he can bring Britain’s deficit under control.

In a sign of cabinet tensions, Ben Wallace, defence secretary, and James Heappey, his deputy, indicated they could quit if Liz Truss, prime minister, reverses a pledge to raise defence spending to 3 per cent of gross domestic product by 2030.

Banks are expected to make bumper profits from rising interest rates, including from reserves held on deposit overnight at the Bank of England, and from bigger margins on lending.

Hunt, who has said he is not opposed “in principle” to windfall taxes, is weighing up the level of tax that should be applied to banks.

Currently they pay an effective UK tax rate on their profits of 27 per cent, comprising corporation tax set at 19 per cent and an 8 per cent bank surcharge.

Hunt confirmed on Monday that corporation tax will rise to 25 per cent next April; he has not yet decided whether to retain the 8 per cent bank surcharge, which would give an effective rate of 33 per cent for the sector.

Treasury officials said the government wants to have a “competitive” tax system, but even if Hunt cut the surcharge to 5 per cent, it would still leave the industry facing an effective rate of 30 per cent.

At that level, the Treasury could hope to raise roughly an additional £500mn per annum from the banks, although the figure would be higher if profits were to rise strongly.

Asked if banks might face higher taxes, the Treasury said: “We can’t comment on specific speculation, however the chancellor and prime minister have been clear that difficult decisions will be required to restore economic stability and no options are off the table.”

John Glen, former City minister, said an effective tax rate of 33 per cent, plus national insurance contributions, would leave Britain as an international “outlier in terms of the overall tax burden”.

David Postings, chief executive of UK Finance, a trade body, urged the government “to consider the [bank] surcharge very carefully and not put at risk the competitiveness of the UK’s banking and finance industry”.

Senior bankers confirmed they expected lenders to record big profits this year, driven by higher interest rates. One big lender said the Treasury had sought its views on the surcharge, but the signs were ominous.

“We thought we were going to receive a little help from the Treasury but that is not looking good,” said one bank executive.

Meanwhile Hunt is likely to extend the government’s windfall tax on oil and gas producers beyond its “sunset clause” in 2025, helping to close the fiscal hole in the next parliament, according to people briefed on his thinking.

The current levy is scheduled to raise at least £28bn over three years before it ends in December 2025. Extending it by two years could raise more than £10bn for the Treasury, but much depends on future energy prices.

Hunt on Tuesday called on his cabinet colleagues to cut spending across their Whitehall departments as the government cast doubt on the future of the pension “triple lock”.

Downing Street said Truss could not promise to keep the arrangement, under which the state pension rises every year in line with whichever is highest out of inflation, earnings growth or 2.5 per cent.

It said the chancellor “made clear public spending would continue to rise overall but departments will continue to be asked to find ways to save taxpayers money”.

Downing Street added the government remained committed to its pledge to raise defence spending to 3 per cent of GDP by 2030, but the plan for reaching that target might change.