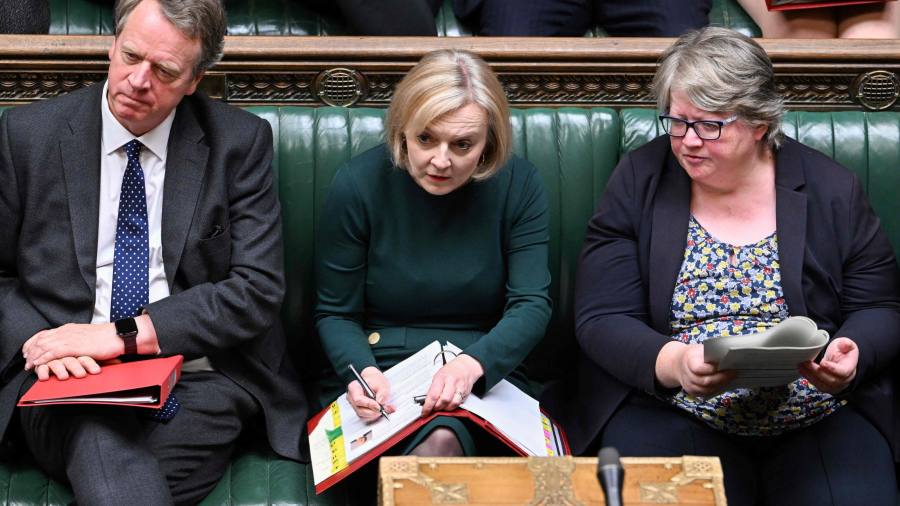 Liz Truss, UK prime minister, is preparing to rip up the government’s “mini” Budget in a desperate attempt to rebuild market confidence and save her embryonic premiership.

Kwasi Kwarteng, the chancellor, is expected to return from IMF meetings in Washington on Saturday, with government insiders saying he will have to scrap measures in his £43bn package of unfunded tax cuts.

Some Tory MPs believe Kwarteng could not survive such a humiliation and Truss would be severely damaged, but one person briefed on the fraught negotiations said: “Almost everything in the Budget is now up for grabs.”

Another person close to the Number 10 discussions said that up to £24bn of tax cuts could be reversed, including the flagship £18bn plan to cancel a scheduled increase in corporation tax next year. One person involved in the talks said: “The mood in the bunker is grim.”

The pound and UK government bonds rallied on Thursday amid speculation of a U-turn.

“People are petrified of the markets,” said one Conservative MP close to the Truss team. “They also know how serious this is politically.”

Tory MPs were in despair over the political and economic chaos that has overcome Truss’s administration since the tax cuts were announced on September 23, and the prime minister’s future is being called into question.

One former cabinet minister said: “We have to unite as a team and say her time is up. Our country is burning. People are suffering. This is about duty and public service.”

James Cleverly, foreign secretary, said ditching the prime minister after 37 days in office would be a “dangerously bad idea” but several Tory MPs said Truss might struggle to survive in office beyond the new year.

Truss may be helped by the lack of agreement among Conservatives MPs on who might replace her, but the abandonment of most of her economic policy would represent a political disaster for her administration.

Government officials say Truss will keep the £13bn cut in national insurance and a temporary stamp duty cut, but all other items in the “mini” Budget were on the table. Those being re-examined include VAT-free shopping for foreign visitors, a change to the IR35 off-payroll working rules and cuts to dividend tax.

Kwarteng, speaking in Washington, insisted he would stick to his plan to deliver a medium-term debt plan on October 31 and declared he was not worried about being sacked: “I’m not going anywhere.”

Another person close to the government discussions on the “mini” Budget said: “No decisions have been taken.” Number 10, asked whether a U-turn was imminent, insisted: “Our position hasn’t changed.”

But an emergency BoE gilt-buying scheme that helped quell a liquidity crisis in the pension industry ends on Friday and some investors remain concerned that if the government does not roll back its unfunded tax cuts, a further bout of turbulence could follow.

The Pensions Regulator has said “there’s still a lot to be done” by pension schemes to prepare for the end of the bond market support programme, which the BoE began in the wake of the “mini” Budget.

The head of the IMF also reiterated the fund’s call for Kwarteng to reconsider the debt-funded tax cuts. “Don’t prolong the pain — make sure that actions are coherent and consistent,” Kristalina Georgieva said.

Mel Stride, chair of the House of Commons Treasury committee, also called for the cuts to be reversed.

“We have reached the point now that there needs to be very serious consideration of a row-back on the tax package,” he told the Financial Times. “Corporation tax could be central to this. It’s a large number and a change in tack here would send a particularly powerful signal that fiscal credibility is firmly back on the agenda.”

Kwarteng had proposed reversing a planned increase in corporation tax from 19 per cent to 25 per cent next April — the expected revenues are already written into the government books — at a cost of £18bn by 2026.