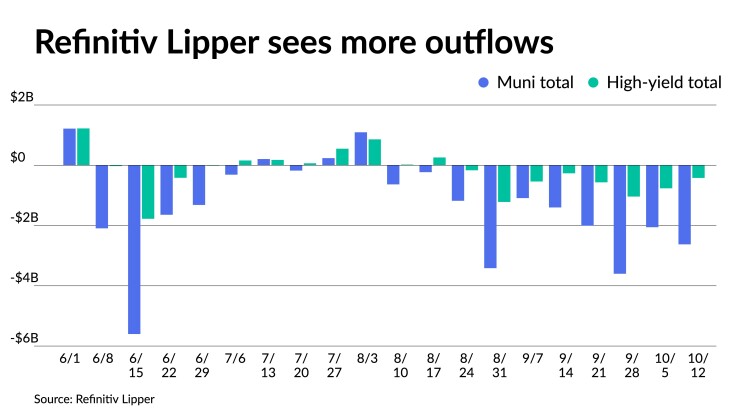 Municipals were weaker Thursday following the release of consumer price index figures that showed inflation remains stubbornly high. U.S. Treasuries sold off on the front of the curve and equities rallied.

Triple-A benchmarks were cut three to five basis points, depending on the scale, while U.S. Treasury yields rose nine to 18 basis points five years and in. The two-year UST was just shy of 4.5% Thursday.

He said the Fed is “likely to remain aggressive, possibly for longer than markets were previously pricing, noting that “the chances of the Fed going too far in their monetary tightening only increases with this report.”

And the release of the Federal Open Market Committee meeting minutes Wednesday “reaffirmed a clear commitment to remain on an aggressive path of policy tightening, and maintain that higher level for longer, even as over-tightening risks are coming into view,” according to Morgan Stanley Research strategists.

“With no notable pushback against the current pace of rate hikes,” they believe the FOMC is on track for another 75 basis point hike in November.

But despite all the hiking so far this year, Jeffrey Cleveland, principal and chief economist at Payden & Rygel, said the “fed funds is still not in restrictive territory as measure by real fed funds (nominal fed funds minus core inflation).”

He said the fed funds rate is going to 5% soon and possibly above, and if it stays there for a while, then two-year UST yields may move higher as well, he noted.

“Caution has been pushed aside as bidding reflects more of a comfort level with absolute yields and relative value ratios,” said Kim Olsan, senior vice president of municipal trading at FHN Financial. “Call it a pause to the sorrowful tone that dominated September’s business and a turn to year-end dynamics.”

While October’s trade has been “nearly one way with lower yields,” she said that “generic levels sit comfortably above the end of 2021 — reinforcing the attractive taxable equivalent yields available.”

Relative value hasn’t suffered, hovering around the 70% range, “despite short-term munis having rallied about 15 basis points from the end of September,” she said. Intermediate double-A-rated bonds are trading above 3.25%, which is over a 5% taxable equivalent yield.

“In the lull of the primary market, heavy bid list volume is being met with strong interest — pushing yields further away from September’s range,” she said. “In particular, high grades remain absent from the calendar (that will change soon) and any size in quality bonds is finding solid results.”

She said flows have recently increased on the days when the 10-year spot has risen. From Sept. 12 to Sept. 23, “the 10-year spot rose 37 basis points and at the same time secondary volume increased from $10 billion to a high of $17 billion,” she said.

“The last week of September brought another leg up in yield with a 15 basis point selloff that moved daily trade totals over $20 billion,” Olsan said. “A stronger tone in October has moderated volume to some degree, with daily flows running at $12 billion.”

For the rest of the month, she said an uptick in issuance will “take some focus away from secondary activity.”

“As cash looks to find the most opportune entry points, supply and demand will be key for month-end performance,” Olsan noted.

Muni CUSIP requests decline
Municipal request volume declined in September, following a decrease in August, according to CUSIP Global Services. For muni bonds specifically, there was an increase of 10% month-over-month but a 22.7% decrease year-over-year.

The aggregate total of identifier requests for new municipal securities, including municipal bonds, long-term and short-term notes, and commercial paper, fell 7.7% versus August totals. On a year-over-year basis, overall municipal volumes were down 19.6%.

Consumer price index remains high
“Headline inflation on a year-over-year basis remains stubbornly high with a very modest pace of decline from 8.3% to 8.2% in September,” said Olu Sonola, head of US regional economics.

He noted the Fed would have been watching the core CPI print “like a hawk.”

“The acceleration in services inflation, on the back of continued strength in shelter inflation and wage pressures from a very tight labor market, will likely keep inflation uncomfortably high for some time,” he said.

“The only iota of good news is that core goods inflation continued to moderate,” Sonola noted. “The bottom-line is the Fed’s aggressive march towards restrictive interest rate territory continues full speed.”

“The September report sends a hawkish message as the signs of persistent price pressures in the August release have not abated,” according to Morgan Stanley Research strategists.

The report, they said, “is unlikely to alter the near-term Fed policy path as labor market data has also been robust.”

They noted that “more sustained core services pressure, in particular rents, could see the Fed having to contemplate another 75bp hike in December, against our current base case of 50bp.”

FOMC minutes redux
“The minutes from the September FOMC meeting continue to reflect a hawkish committee which was expected after they raised the expected path of rates to a more hawkish terminal rate in the Summary of Economic Projections released at the meeting,” said Jason England, Global Bonds Portfolio Manager at Janus Henderson Investors.

While participants believe the pace of rate increases will slow at some point, he said “this should not be taken as a dovish pivot.”

“‘Many participants’ indicated that once the policy rate was at a restrictive level, it would be necessary to keep rates at that level for some time to make sure there is convincing evidence that inflation is returning to the 2% target,” England said. “And even though ‘several participants’ are worried about the uncertainty with the global economy and what adverse effects continued tightening of monetary policy could have on the economy outlook, ‘many participants’ thought the costs of not tightening enough outweighed the costs or tightening too much.”

However, Blake Gwinn, head of US Rates Strategy at RBC Capital Markets, doesn’t believe was much in the minutes that was “particularly additive to a) the SEP dots that came out of this meeting and b) the extensive comments we have had from Fed speakers since the meeting.”

“While not ‘new’ and largely just reiterating what was already laid out in the dot plot several weeks ago, the line in the minutes we would stress is: ‘Participants observed that, as the stance of monetary policy tightened further, it would become appropriate at some point to slow the pace of policy rate increases while assessing the effects of cumulative policy adjustments on economic activity and inflation,'” he said.

“The minutes reiterated the Fed’s commitment to returning inflation to 2%, while highlighting some committee members growing unease over the pace of rate hikes,” they said. “This chimes with recent public comments from some Fed members … emphasizing the lagged effects of monetary policy, and potential international/financial market spillovers associated with the aggressive pace of policy tightening thus far.”

Despite these risks, Levy and Ghzalah said the minutes suggest “the prevailing view among FOMC participants is that ongoing rate increases will be appropriate, and that policy will need to remain in a restrictive stance until compelling evidence emerges that inflation is moving down to 2%.”

Moreover, they noted, the minutes “indicate that on balance, participants continue to view the risks of not tightening enough as outweighing the risks of over-tightening, with the minutes indicating that even with this approach to risk management, there is still a broad understanding around the FOMC that it will be appropriate to slow the pace of policy rate increases at some point with the stated intent of allowing the Fed to assess the cumulative effects of policy tightening.

“Given labor market resilience and still elevated inflationary pressures, the Fed will likely tilt toward a 75bp rate hike in November, and continue to hike rates through early 2023,” Levy and Ghzalah said.

The September FOMC minutes “showed the committee’s continued commitment to stay the course on higher rates even as awareness of adverse effects to growth grows,” Morgan Stanley Research strategists.

They noted that “comments in the minutes showed clear concern that inflation pressures have remained high, and participants saw the balance of risks on inflation to the upside even after a substantial upgrade to the September SEP inflation projections.”

But simultaneously, Morgan Stanley Research strategists said “risks around growth are tilted to the downside, and participants acknowledged risks around over-tightening.”

“Still, the spectre of a potential unanchoring of inflation expectations is clearly outweighing concerns about adverse growth outcomes,” they noted. “Tighter financial conditions were noted throughout the minutes but considered as being in line with what was necessary to slow the economy and return inflation to the 2% goal. Since the September meeting, financial conditions have tightened another 50bps.”

But “with some on the FOMC growing uneasy with the pace and aggressiveness of Fed rate hikes, the November meeting will set up a lively debate around the near-term path of policy rate increases,” Levy and Ghzalah said.

“While data released prior to the November meeting will be unlikely to sway the Fed’s decision,” they said that Fed officials will discuss the pace of tightening at next month’s meeting.

“Given the September meeting took place prior to some of the recent dislocations in currency, government bond, and equity markets, it may well be the case that consensus coalesces around a slower pace of tightening in December than our current call of 50bp, particularly given the committee was effectively split between projections of 100bp or 125bp of further rate hikes by year-end in the September SEPs,” Levy and Ghzalah said.