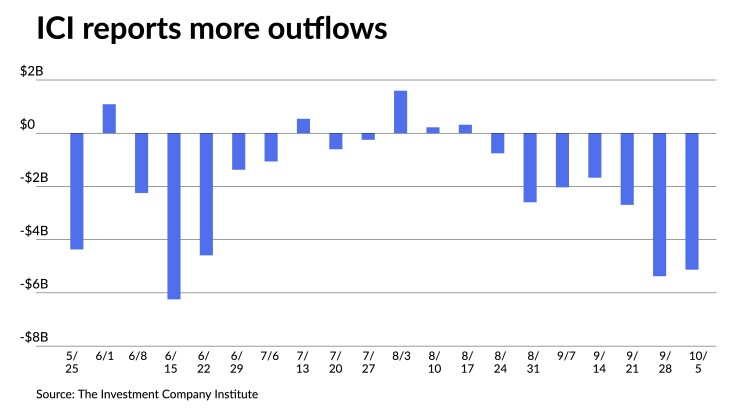 Municipals were firmer in secondary trading Wednesday as the largest deal of the week, a $700 million offering from the New Jersey Turnpike Authority, took focus in the primary. U.S. Treasuries made gains and equities ended mixed after the Federal Open Market Committee minutes signaled continued tightening.

“The Fed Minutes showed tightening will continue even as the labor market slows,” said Edward Moya, senior market analyst at Oanda. ”The key takeaway from the minutes was that several participants noted that it would be important to calibrate the pace of further policy tightening with the aim of mitigating the risk of significant adverse effects on the economic outlook.”

Some Fed officials have “voiced support for remaining data-dependent when it comes to future hikes and right now it looks the data is about to get ugly,” he said.

He noted it will be difficult “for the Fed to remain aggressive with tightening as the economic deteriorates quickly.”

Moya said the Fed is giving “subtle dovish hints here and that is good news for risky assets.”

Officials, he said, “saw slowing the pace of hiking at some point and that could easily happen after the November FOMC meeting,” where investors should expect a 75 basis point rate hike. He said there will be a “downshift in December would be likely if the global growth outlook continues to deteriorate and if the U.S. economy softens.”

Outflows topped $5 billion for the second consecutive week with the Investment Company Institute reporting $5.128 billion for the week ending Oct. 5 after $5.374 billion of outflows the previous week.

ETFs saw inflows of $1.949 million after $292 million of outflows the week prior, per ICI data.

Municipals were in firmer territory Wednesday amid the lighter supply, which is allowing munis to outperform taxables, but how the Fed moves forward and UST react to it are leading exempts.

“The municipal curve has reached attractive nominal offerings and does not want to cheapen further, but the Fed and USTs have final say,” said Matt Fabian, a partner at Municipal Market Analytics, in the firm’s weekly Outlook report.

For tax-exempt munis, he said,brief positive action last week “was enough to catalyze tax swap activity, accounts fearing their miss of a market ‘bottom’ and thus maximizing the value of the trade.”

An abundance of 5s and above from year-to-date issuance “has also given swappers an opportunity to dump their seemingly cursed low coupon structures, not to mention any taxable bits still remaining,” he said.

“With respect to both tax-exempt 2s and 3s and taxables, persistent mutual outflows have been highly disruptive,” Fabian noted.

On the other hand, “municipal ETF net creation jumped last week with the start of a new quarter,” possibly signaling “that at least some of the outflows shown by traditional mutual funds are really investor reallocations to cheaper/more-passive vehicles,” according to Fabian.

ETF inflows, he said, “are implicit long-term spread tighteners, so recent developments — like new ESG aware ETFs and the launching of a very low cost Schwab fund — are constructive for overall municipal performance.”

Despite last week’s divergence from USTs, triple-A tax-exempts have “recorded near 1.00 correlation with USTs in the prior two months of trading data,” he said. This suggeststhat “regardless of nominals, taxables and the Fed are in charge,” he noted.

However, he said, nominal yield buyers are still evident: “high grade credits available at or near 5%, and 4s freed to trade at a discount, have historically created as much demand as needed to clear.”

The average seven-day simple yield for all tax-free and municipal money-market funds climbed to 2.00%.

Taxable money-fund assets inflows of $788.4 million to end the reporting week at $4.420 trillion of total net assets. The average seven-day simple yield for all taxable reporting funds rose to 2.61%.

Outside the plain-vanilla municipal market, credit is the key factor driving the selective appetite for risk in the speculative sector, according to two municipal experts. While investors are being more finicky when it comes to high-yield paper — they still have a good appetite for riskier bonds.

“The high-yield muni market currently has a risk-off tone, which is being driven by fund outflows and higher interest rate expectations,” John Pellicci, head of municipal high-yield underwriting and sales at Hilltop Securities Inc., said in a recent interview.

But, there is still an appetite for the riskier paper among the sophisticated yet defensive retail investors, he and colleague Yaffa Rattner, head of municipal credit at Hilltop, said in a recent interview.

“In the current environment it is credit first and then yield — as opposed to yield first with an attempt to accommodate the credit,” Rattner said.

High-yield is not necessarily defined by interest rates but a function of rating — typically BBB or lower or non-rated, Pellicci and Rattner noted. “There is a huge diversity in rate and spread depending on investor perception of a credit,” Rattner added.

As of Sept. 28, the pair was seeing secondary market demand at the 5.50% or higher level for mature and stabilized credits, and significantly higher for more aggressive credits, they said.

While rates in the plain vanilla market have been noticeably more attractive in recent months, yields are relative and there is no absolute level that will cause investors to “jump in” when it comes to the high-yield market, Rattner noted. “Bonds need to be assessed independently based on risk appetite, which will ultimately drive the demand,” she added.

“There is no magic rate of return that will predictably result in a successful transaction in today’s market,” Rattner said. She said analysts are focused on project fundamentals, management, and liquidity to determine investor participation.

Some sectors are facing more concerns from investors than others, such as healthcare, senior living, project finance and development, she noted.

“Investors make a spectrum of considerations when looking at the high-yield municipal market, including credit, deal size, state and sector,” Rattner said.

While investors are being pickier when it comes to adding high-yield paper to their portfolios, rising interest rates have made the supply of the risky paper recently hard to come by in the current municipal market, the analysts said.

“Deals that could have been completed last year are struggling this year given higher costs of capital and increased analytic focus on credit and covenant packages,” Pellicci said.

He noted a decrease in the number of below-investment-grade deals that have had successful pricings, and several nonrated deals are lingering on the calendar due to market conditions.

The structure of recent high-yield deals has also been varied, according to Rattner and Pellicci.

”We have seen a number of high-yield deals structured with a bullet maturity in five to 10 years that would enable a refunding upon successful integration of the finance project,” Pellicci said. “We have also seen a number of charter schools issuing paper with a 40-year maturity.”

Going forward, Rattner expects the fourth quarter to be as active as it typically is when it comes to volume ahead of year-end, but the availability of high-yield paper will be governed by deal quality and market fundamentals, she noted.