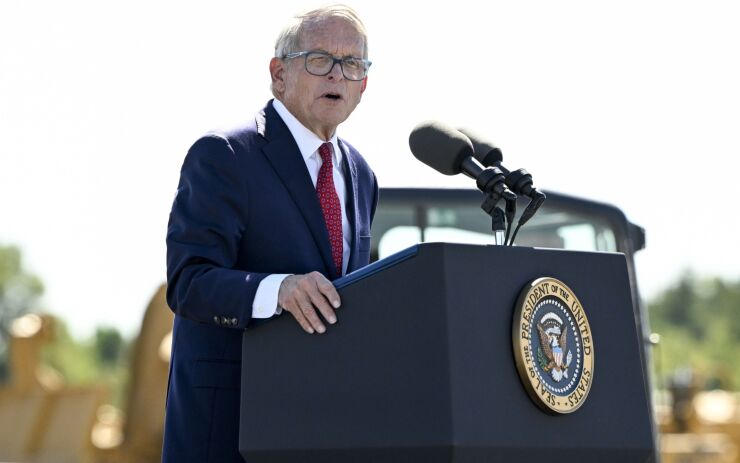 Moody’s Investors Service raised its outlook on Ohio’s Aa1 rating to positive, citing the state’s strides in branching out into new economic arenas that could bolster lagging growth and weak demographic trends.

“The positive outlook is based on growing evidence of new economic development that could diversify the state’s economy, improve growth and strengthen demographic trends over the medium term,” Moody’s said.

The state’s stronger fiscal health also played a role.Moody’s expects “that strong reserves, proactive financial management, and low fixed costs that will support budget flexibility during potential economic uncertainty in the next 18-24 months.”

Moody’s named factors that could lead to an upgrade including continued improvement in demographic trends, maintenance of a budget in structural surplus, a quick response and recovery from any economically driven budget shock, and evidence that economic development is diversifying the state economy and improving growth and demographic trends.

The state has bolstered reserves with flush tax revenues to smooth the ramp down of Federal Medicaid support and to fund capital projects and economic development.

Gov. Mike DeWine joined company officials Tuesday to announce the state’s selection by Honda to center U.S. electric vehicle production. Honda said it would spend $700 million to retool existing auto and powertrain plants for electric vehicles and join LG Energy Solution in a $3.5 billion joint venture to produce the battery modules in Fayette County. The companies say the new plant will create 2,200 jobs with construction to begin next year with completion in 2025.

Reserves played a key role in the rating changes. The state revised its reserve policy raising the targeted balance to 8.5% of prior-year general fund revenues from 5%. The state has built its reserve to $2.7 billion which equates to about 10% of fiscal 2022 state-source general revenue funds.

The state managed through the economic toll of the COVID-19 pandemic with a recovery taking root in 2021 like most other states. Tax collections for fiscal 2022 topped estimates by $2.7 billion, or 10.8%, and were $1.7 billion above the previous year, despite income tax cuts.

The state currently expects revenues for the full biennium that ends June 30, 2023, to exceed the previous budget cycle by a total of $7 billion. The state has primarily used its $5.4 billion of American Rescue Plan Act federal pandemic relief for one-time expenses including directing $1.5 billion of its pot of funds to fully repay federal borrowing to cover a deficit in the Ohio’s Unemployment Trust Fund in 2020 due to pandemic-related job losses.