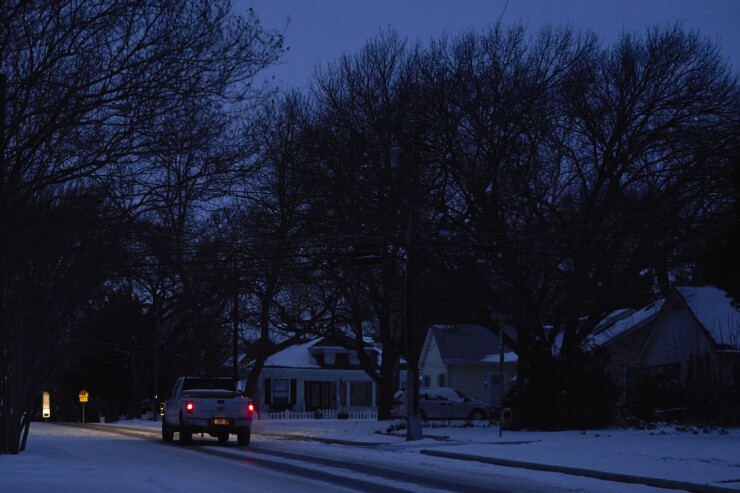 A $3.4 billion bond deal to securitize costs incurred by Texas natural gas providers during 2021’s Winter Storm Uri could be priced as early as the second week in November by an underwriting team that no longer includes UBS as a co-manager.

The Texas Natural Gas Securitization Finance Corporation Board on Thursday removed UBS from the transaction, according to Lee Deviney, executive director of the Texas Public Finance Authority. It was the latest deal the investment bank lost in the state after landing on a list of 10 financial companies determined to be boycotting energy businesses.

In a statement on Tuesday, UBS said it “recently met with the Texas Comptroller’s Office to reiterate the importance of the energy industry and Texas to our business and provided them with additional information demonstrating that it is both our policy and practice to do business with energy companies, including those in the fossil fuel industry.”

UBS Group was the only bank that underwrites munis on the list Texas Comptroller Glenn Hegar released Aug. 24 under a 2021 state law.

While the law mainly seeks to identify potential boycotters of fossil fuel businesses for divestment purposes, it also requires companies to provide written verification in contracts with the state and its local governments for goods and services valued at $100,000 or more that they do not and will not boycott energy businesses during the term of the contract.

The investment bank was subsequently dropped as co-manager and replaced with Wells Fargo for $122.2 million of Laredo waterworks and sewer system revenue bonds before they were priced Aug. 29.

Bloomberg News reported the Normangee Independent School District rescinded its acceptance of UBS’ Aug. 8 winning bid for $18.4 million of bonds after the Texas Attorney General’s Office wouldn’t approve the sale with UBS as a purchaser.

The district, which declined to comment when contacted by The Bond Buyer, subsequently sold the bonds Sept. 15 through RBC Capital Markets.

The natural gas bonds could be priced as soon as Nov. 9 if the transaction is approved later this month by the state’s bond review board, Paul Jack, a senior managing director at Estrada Hinojosa & Company, the deal’s financial advisor, told the Texas Public Finance Authority board last week.

Jefferies was tapped in May as senior underwriter for the taxable bonds. The team included Morgan Stanley as a co-senior manager and Barclays and UBS as co-managers even though all three were under review after being contacted by Hegar to clarify their fossil fuel investment policies and procedures.

The Texas Department of Housing and Community Affairs cited the review for removing Barclays, RBC, and Morgan Stanley from its $190 million May bond sale.

The $3.4 billion of taxable customer rate relief bonds issued by the nonprofit corporation will be paid off with charges imposed on customers by eight natural gas utility local distribution companies.

During February 2021’s winter storm, the companies, which are authorized to directly pass on gas costs without a markup to customers, incurred huge expenses for the commodity needed to heat homes and businesses.

The Texas Legislature passed a series of bills in response to the storm. For natural gas providers, House Bill 1520 authorized securitization financing to provide customers with rate relief by extending the period over which they will pay the extraordinarily high gas costs.