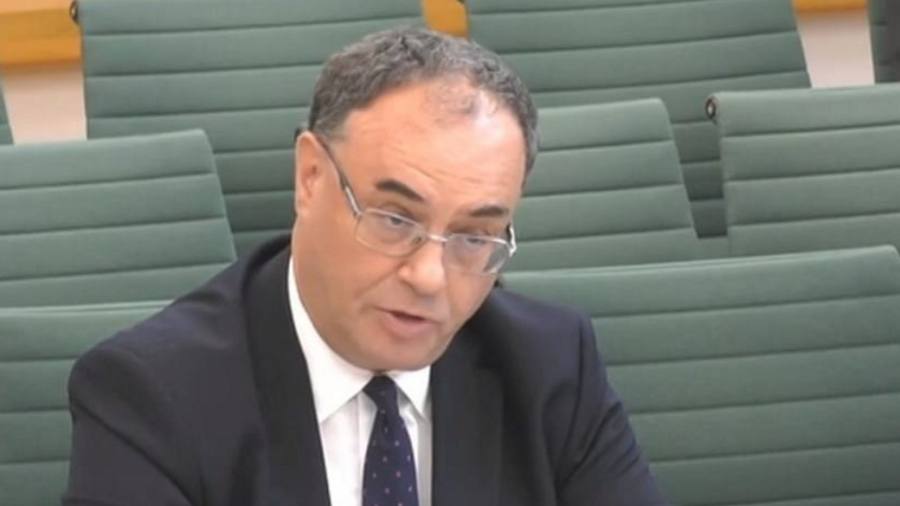 Andrew Bailey said the Bank of England had no intention of extending its emergency intervention in the bond market after Friday and that the £65bn programme would then come to a close.

The central bank’s governor said that although there had been strains, market conditions in government bonds “seemed calmer” on Tuesday after it took action for a second time in two days.

But he told an event organised by the Institute of International Finance in Washington that the BoE had to be clear that financial stability interventions were temporary and clashed with the bank’s ambition to tighten monetary policy.

Bailey said for the BoE to be able to intervene rapidly on financial stability grounds and for that not to damage its monetary policy credibility, the moves had to be temporary.

“We’ve announced we will be out by the end of this week. My message to the [pension] funds is you’ve got three days left,” he said.

The Bank staged its second emergency intervention in as many days on Tuesday, with financial institutions stepping up calls for it to prolong its bond-buying programme to shore up the British pension system.

The BoE widened its £65bn gilts purchasing programme to include inflation-linked bonds in its latest attempt to stem “fire sales” by pension funds that have created a “material risk to UK financial stability”.

Tuesday’s move, the first time the BoE has purchased index-linked debt, initially helped steady gilt markets on a day when the IMF reiterated its doubts about UK economic prospects. It followed the BoE’s increase on Monday of the programme’s daily maximum purchase level to £10bn.

But in a sign of persistent strains in the market, a late sell-off on Tuesday pushed the yield on the standard 30-year UK government bond as much as 0.14 percentage points higher to 4.83 per cent — its highest level since the BoE began emergency interventions in the gilt market last month. Bond yields rise as prices fall.

From Monday, pension funds would only be able to access the short-term funding programme the BoE announced earlier this week, he said, but the central bank would not print money to buy more assets.

That programme did not offer to buy government bonds — whether standard bonds or those linked to inflation — but would lend money to offer a pressure valve for companies that needed cash quickly if yields rose and they needed to post new collateral for their highly leveraged funds that were losing money.

The BoE had to amend its original programme to act as a backstop to gilts markets twice in two days to avoid a vicious circle that was forcing pension funds to dump assets in moves it said were to avoid “dysfunction” in markets and posed “a material risk to UK financial stability”.

The pension industry had been calling on the BoE to extend the bond-buying programme’s Friday deadline because of concerns funds do not have sufficient time to shore up portfolios against further shocks.

The Pensions and Lifetime Savings Association, which represents schemes with about 30mn savers with £1.3tn in retirement money invested, said “many” funds would prefer the BoE’s programme to be extended at least until the government unveils debt-cutting plans on October 31.

“It makes sense that the bank may not be able to fully wind up its support schemes until the markets’ fiscal concerns have eased,” said Paul Dales, chief UK economist at Capital Economics, the consultancy. “We would not be surprised if the Bank had to extend its pledge to buy gilts beyond Friday 14th October.”

The central bank said on Tuesday it was prepared to buy up to £5bn a day in index-linked UK government bonds as it warned of “dysfunction” in the gilt market, where the cost of long-term borrowing this week hit its highest levels since the BoE began its emergency intervention. Later on Tuesday, the Bank said it had bought £1.95bn of index-linked bonds on the first day of its new intervention.

The measures came just a day after it unveiled a new short-term funding programme it hoped would act as a pressure release valve for pension schemes that have been caught up in a vicious circle after chancellor Kwasi Kwarteng’s September 23 “mini” Budget set off a historic sell-off in gilts.

“Two interventions in 24 hours is pretty extraordinary,” said Sandra Holdsworth, UK head of rates at Aegon Asset Management, adding that the BoE’s steps showed how the problem in the pension industry was “much bigger than anyone thought a week ago”.

Downing Street said on Tuesday that prime minister Liz Truss would not drop the tax cuts in the “mini” Budget despite the central bank’s repeated interventions.

“The prime minister remains confident that the measures set out will deliver growth in the UK economy,” a spokesperson said, adding that the additional measures announced by the central bank on Tuesday “will support an orderly end to the BoE’s temporary purchase scheme”.

But, signalling its concern at Kwarteng’s unfunded tax cuts, the IMF said the chancellor’s fiscal package was “complicating the fight against inflation”.

The fund’s head of financial stability added that the only way yields on UK government bonds were likely to come down was if the government reversed course on its tax cuts. Tobias Adrian said the tax cuts led markets to expect the BoE would have to raise interest rates more than otherwise. “Certainly, a change in fiscal policy would change the trajectory of interest rates going forward,” he said.

Indicating that the BoE’s intervention should remain targeted and temporary — rather than extended — he said longer-lasting action to bring down gilt yields would be inflationary if the UK did not change course. “The BoE has the price stability objective and that is going to stand in the way of having permanently lower interest rates,” he said.

The BoE’s emergency bond-buying scheme, launched on September 28, initially helped soothe jittery markets. But selling picked up strongly on Monday as analysts and investors worried about the programme’s looming end date on Friday.

“The beginning of this week has seen a further significant repricing of UK government debt, particularly index-linked gilts. Dysfunction in this market, and the prospect of self-reinforcing ‘fire sale’ dynamics, pose a material risk to UK financial stability,” the BoE said.

Inflation-linked gilts, a market dominated by defined-benefit pension schemes, have come under particular strain this week. The 10-year real yield surged 0.64 percentage points on Monday to 1.24 per cent, the biggest rise since at least 1992, according to Bloomberg data.

After the BoE’s Tuesday announcement, a £1.1bn 30-year inflation-linked gilt sale by the Debt Management Office attracted solid demand. But the DMO paid the highest inflation-adjusted borrowing cost for any debt since 2008, with the bond pricing at a real yield of 1.55 per cent.

The BoE increased the limit on its daily bond purchases to £10bn on Monday, from £5bn previously. It kept that overall cap intact on Tuesday, but said it would buy as much as £5bn a day in conventional gilts and £5bn in index-linked gilts until the programme expires on Friday. So far the central bank has only used a small portion of the total £65bn that it has allotted to bond buying.