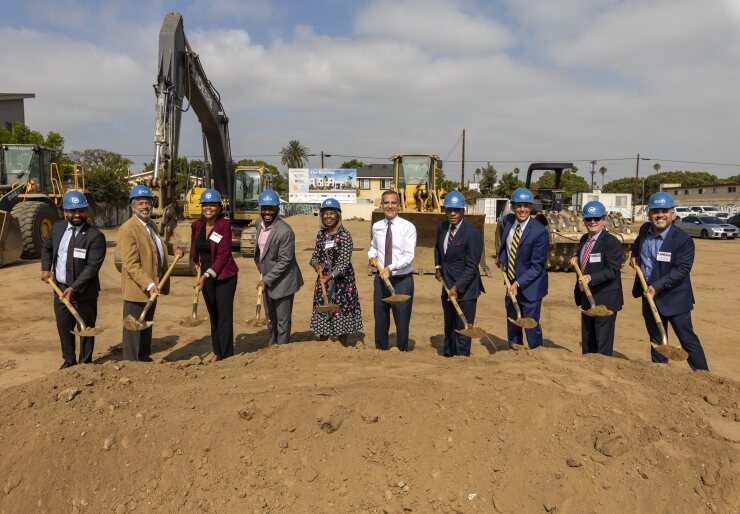 Los Angeles Mayor Eric Garcetti and the city’s housing authority announced Tuesday that the city will restart its Section 8 housing voucher program, which it had paused for five years.

“Housing solves homelessness; that is our North Star,” Garcetti said. “By reopening the Section 8 waiting list, we will present thousands of our neighbors with safe and stable housing opportunities.”

The announcement by Garcetti along with the Housing Authority for the City of Los Angeles, commonly known as HACLA, reopens the waiting list for a federal program that provides subsidized housing vouchers to its poorer residents. That is expected to give up to 30,000 households the opportunity to obtain affordable housing, according to Garcetti.

President Joe Biden has made it a priority to fund the federal program.

It was included as a tenet in the Build Back Better agenda, he announced during budget talks in September 2021.

The state and major cities in California have been doing a full court press on the housing issue. The cities and the state have allocated more than $20 billion to solving the housing scarcity and cost problem.

When Gov. Gavin Newsom signed 41 bills aimed at the housing crisis last week, he said that the state has dedicated $14 billion to housing programs since he took office in 2019.

The state and major cities have issued billions of dollars of bonds to support affordable housing.

California has more than 160,000 unhoused people in 2022, according to the U.S. Interagency Council on Homelessness.

Los Angeles voters approved Proposition HHH in 2016 authorizing the city to issue up to $1.2 billion in general obligation bonds over 10 years with the aim of building 10,000 units of supportive housing to reduce homelessness.

The city most recently issued bonds tapping the HHH bond authority in October. Voters also approved a one-fourth cent sales tax increase in 2017 aimed at addressing homelessness that is expected to net a total of $3.5 billion over 10 years.

Residents will be able to apply for Section 8 vouchers starting Oct. 17 and ending Oct. 30. After the application window closes, the city will select 30,000 people via random lottery to be placed on the voucher waiting list. To be eligible, applicants must fall within the federal very low-income category.

“It’s been five years since we last opened our Section 8 waiting list and the need for rental assistance has grown. Rental assistance programs like these fight against poverty and help reduce homelessness. Our goal, with the reopening of HACLA’s Section 8 Waiting List lottery, is to help thousands of families who are struggling financially to find stable housing,” said Douglas Guthrie, HACLA President and CEO.

Since taking office, Garcetti said he has acted with unprecedented urgency to confront the homelessness and housing crisis — from expanding the homelessness budget to over 20 times what it was eight years ago, to launching the A Bridge Home shelter program, which has served over 5,500 distinct residents while HHH-funded projects are built.

Measure HHH funding has enabled the city to increase its annual production of supportive housing by over 600%, from 300 to 2,000 units.

In the 2022-2023 city budget, Garcetti championed a nearly $1.2 billion commitment to homelessness solutions. This spending is supposed to produce more than 3,700 permanent supportive housing units via $415 million for more than 2,200 total housing units through Proposition HHH and $255 million for a new round of Project Homekey, which will add 928 units, of which 909 will be permanent supportive housing units. The City has also partnered with private property owners through LeaseUp, a program to fill vacancies while helping Angelenos at risk of homelessness find and maintain affordable housing.

Defying forecasts, crude oil prices have wiped out most of this year’s gains and could head lower
Mortgage rates fall for the third straight week, but demand still drops further
Bad Things About Weekly Options: Risks + Problems
Is Yahoo Worthless without Alibaba?
These are shaping up to be the best and worst luxury real estate markets for 2023