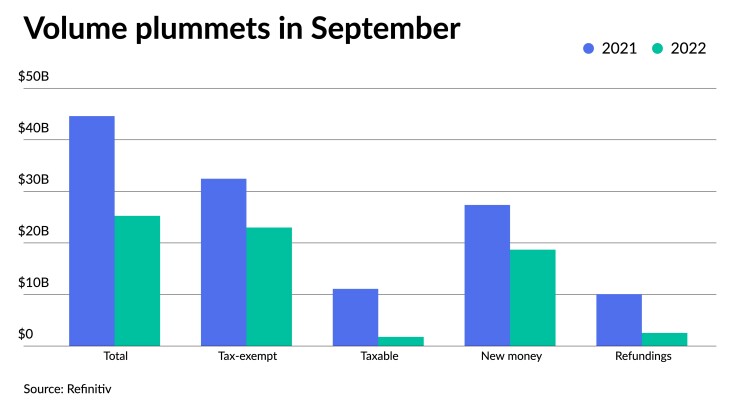 Third-quarter issuance was down 26% led by a steep drop in taxable and refunding volumes, according to Refinitiv data. Total issuance for the first three quarters of the year is down 14.8% from 2022, likely leading to 2022 falling short of 2021’s and 2020’s record-breaking numbers.

September felt like an inflection point for the market, noted CreditSights strategist Pat Luby. Yields are trending higher, demonstrating “we’re in a different yield environment for investors,” and sizable mutual fund outflows have continued to put pressure on the market.

“It’s just been a really tough month all the way around. The volatility has increased, making it more difficult to hedge. Higher hedging costs means either less available liquidity in the secondary market or wider spreads,” he said.

“The September results are going to make all market participants, whether the buy-side or sell-side, more conservative as we move through the last through the last months of the year,” Luby said.

“September is typically light anyway, only this year it is especially so,” they said.

Compounding the lighter issuance, well below the 10-year average of $32.559 billion, was September Federal Open Market Committee meeting during the second to last week of the month in which the Fed implemented its third 75-basis-point rate hike.

“Everyone is waiting to see, but this time in September, [issuance] just plummeted,” she said, as total volume went from $3.6 billion the week prior to $1.3 billion during the week of the FOMC meeting, according to Refinitiv. “It’s understandable and logical. Issuers wanted to avoid being caught in the crossfire that week. We’re facing a 75 basis point rate hike.”

“Only a couple of issuers sold bonds that week,” Luby said. “Even if issuers wanted to come that week, a lot of investors were rightfully reluctant to want to put money to work in advance of the Fed’s latest rate hike.”

He said it would have been “difficult for an investor to make a buy decision prior to the FOMC, unless bonds got priced so cheap, it would overcome that uncertainty.”

“It was a combination of buyer reluctance and that greater uncertainty from the Fed earlier in that in the first half that week would have made it prohibitively expensive for issuers to borrow prior to when the Fed made their announcement,” he said.

Some of the supply that would have been issued during the week of the FOMC meeting did come to market the following week — explaining the rebound in supply — but some of it was also deferred, he noted.

And while the reduced new-issue volume takes some pressure off the market by reducing supply, “it also reduces the energy level in the market,” Luby said.

Looking ahead, October is historically a larger new-issue month, though next week’s calendar sits at an estimated $3.8 billion, down from this week’s $7.1 billion.

“The next one to five weeks or so would ordinarily be clear sailing for new issues to come into the market, but the volatility may affect some of those financings,” Luby said.

Lando said she sees issuance in October rebounding from September, saying if several of those prepaid deals return to the calendar, then new issuance will spike.

BofA strategists said recent market conditions may “continue into October if Wednesday’s Treasury market rally proves to be short-lived,” but “if that rally has more follow through, munis should at least stage a tactical rally as well and produce a more normal October with large issuance and active two-way flows.”

In the states, New York claimed the top spot year-to-date.