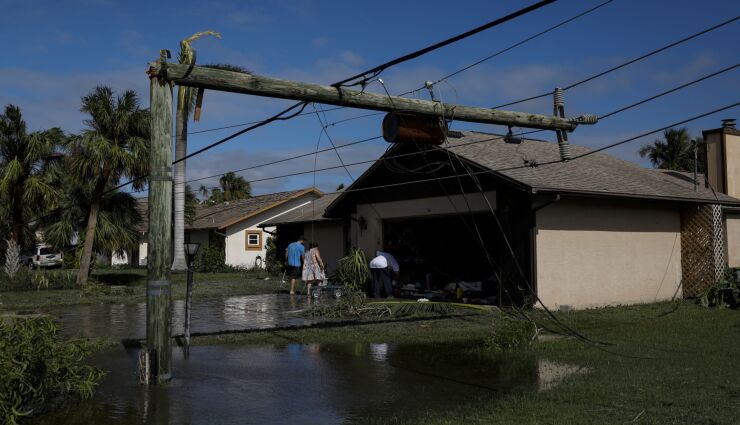 The damage and economic loss from Hurricane Ian could total between $100 billion and $120 billion, according to Dr. Joel Myers, AccuWeather’s founder and CEO.

Myers expects Ian to be one of the costliest storms in U.S. history because of life-threatening storm surge, damaging winds, and flooding rains, especially in developed and populated areas, including areas of expensive coastal real estate.

Ian hit Florida’s West Coast on Wednesday with winds of up to 155 mph and its storm surge impacted cities like Ft. Myers, Naples, and Punta Gorda. Almost 2 million people lost power at the height of the storm.

And it’s not finished yet. States of emergency have been declared in Georgia, Virginia and in North and South Carolina in advance of Ian’s arrival

“Ian is moving so slowly, it is so powerful, and Florida is so flat, some areas will have 75 mph wind gusts over a period of 24 hours and some places will see wind gusts of over 60 mph for a period of over 30 hours,” Myers said in a statement Wednesday.  “That in itself is very unusual and will lead to more damage than a faster-moving storm.”

In June, the National Oceanic and Atmospheric Administration forecast an above-normal hurricane season, which runs from June1 and will run through Nov. 30.

“I’m happy to say that the Cat Fund is actually very well positioned coming into this storm season. We’ve got a $16.2 billion liquid claims paying resources on hand relative to a $17 billion maximum statutory cap on liability. So we’re within shouting distance of being fully funded,” Watkins said.

“So we’re very well positioned on the Cat Fund — that of course includes $3.5 billion of pre-event proceeds that we borrowed and we got a great market reception on that,” he said.

Gov. Ron DeSantis said Thursday that power was out to about 2 million people in the Southwest Florida and that operations were continuing to restore the grid.

Some bridges and other infrastructure sustained damage, he said.

“It’s basically a 500-year flood event,” DeSantis said. “This storm is having broad impacts across the state and some of the flooding you are going to see — some hundreds of miles from where this made landfall — is going to set records.”

Miami-Dade County was spared the brunt of the storm’s fury.

Tampa International Airport said it will resume commercial operations on Friday after the airfield and facilities were inspected and found to not have sustained any serious damage during the storm.

DeSantis said that thousands of Florida residents will need help rebuilding and urged those that could to contribute to the Florida Disaster Fund.