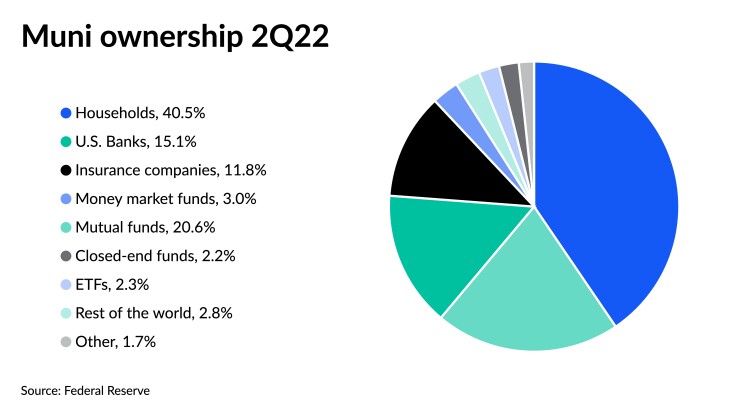 The municipal market has grown in overall size, market value has fallen and retail ownership trends are shifting amid the massive outflows from municipal bond mutual funds this year, the latest Federal Reserve data show.

Retail investors may be moving out of mutual funds and into separately managed accounts, largely due to the headline shock of the massive outflows funds, participants say the data suggests.

On average, munis held by all investors now carry a market value of 98 cents compared to 109 cents as of 4Q21.

However, the market value of munis owned by households declined by less than the overall market in the second quarter of 2022, suggesting an increase in the notional amount of bonds owned, said Pat Luby, senior municipal strategist at CreditSights.

The value of munis owned by individual investors dropped by 2.1%, while the value of the overall market declined by 3.6%, per the data.

Luby said the “dollar volume of money that has left mutual funds doesn’t seem like that money has left the market.” Mutual funds were at $819.4 billion in 2Q22, decreasing $9.2 billion quarter-over-quarter or 10.1%. Mutual funds make up 20.6% of muni ownership.

And while it’s “impossible to know with precision exactly what the driver of the change was,” Luby believes it is in part due to a meaningful amount of assets leaving mutual funds and going into SMAs, which are part of the 40.5% of munis owned by U.S. households.

SMAs were $720.7 billion of the $1.6 trillion of munis held by U.S. households, according to Vikram Rai, Head of Citi’s Municipal Strategy group.

Mutual funds have lost $94 billion year-to-date, per the Investment Company Institute, and $55.9 billion so far this year, per Refinitiv Lipper. SMAs, for their part, haven’t seen the loss of assets “anything like mutual funds,” Rai said.

The industry, Fabian noted, has been shifting away from the traditional transactional account where the investor works with their broker and decides what to do, as opposed to the broker or manager making the choices for them in SMAs and discretionary platforms.

“More of the money has gone that way,” he said of those conservatively managed options. “Which is why the market has had a harder time rebounding from the mutual fund outflows that have happened this year. This has left a hole between the investors who were buying, and the investors who might buy.”

Direct retail has provided some support for mutual funds, which have seen massive outflows this year, by buying some of the bonds mutual funds were selling, said Jack Muller, vice president of Spread Products Strategy at Citi.

But in previous outflow cycles, direct retail has bought a larger percentage of mutual fund outflows.

In the first half of the year, direct retail has only bought about 20% of the mutual fund outflows, whereas in the outflow cycles of 2016 and 2018, net buys for direct retail were more than 100% of mutual funds outflows.

“So direct retail in the past has been much more aggressive in terms of buying the dip, but this year, not so much,” he said.

This indicates a change in individual retail investors’ behavior.

Retail invests in mutual funds for several reasons, such as tax-exempt income, safety and performance.

“The strength of demand for mutual funds had outpaced almost all other investor groups,” Fabian said.

“Other investor groups were typically 50 basis points behind mutual funds. So, when the mutual funds not only stopped buying but also started selling, the market had to reprice itself for the next best investor, which was just some distance away, because mutual funds in their sort of blended income and total return strategy had left other people behind,” he said.

SMAs are “effectively a private mutual fund, customized to your strategy … so for investors who care more about stability and control and less about total return, they’re going to go to SMA direction,” Fabian added.

“What we’re seeing based on the recent volatility is that the retail investor is seeing the value added within the SMA space, particularly this year,” said Peter O’Neill, director and senior fixed income portfolio manager at Bank of America.

With massive outflows and the transparency and control of owning an SMA, he said, “It’s a definite benefit.”

When investors open an SMA, they get a full team.

“The services that we offer out haven’t necessarily changed, but the value of the services you receive within a separately managed account can and have increased over the past several years,” he said.

“That’s what the shift you’re seeing,” O’Neill said. “People have experienced a lot of volatility, which they haven’t experienced before, and because of that, they’re more apt to look for SMAs versus mutual funds where you’re subject to the disadvantage for being in a commingled fund accompanying upon and subject to outflows.”

And while investors are still exposed to market risk in SMAs, they’re not forced to do anything because of the behavior of other shareholders.

Luby said this points to a shift in investor behavior due to the rising-rate environment.

Mutual funds are typically managed to a large target duration, and it can be difficult for investors in mutual funds to adjust their interest rate risk. If they want to take lower duration, they have to go do something different, according to Luby.

Whereas, he said, an active manager with an SMA sometimes has the discretion to adjust duration in portfolios depending on rates.

“The market that we are in now argues in favor of more active management,” he said.

“With the economic conditions, the interest rate environment, the inflationary environment, makes it more important than ever that fixed income portfolios should be, not necessarily managed full-time, but thoughtfully supervised and reviewed regularly,” Luby added.

Despite the exodus from mutual funds, Luby believes they will remain popular.

SMAs, though, will also continue to grow in popularity due to the cost efficiency and flexibility.

“There’s a growing variety of ways for investors who want to be in munis to access munis, and they’re taking advantage of that and tailoring it to their needs,” Luby said.

Investors in SMAs, he said, are typically those who worked with their broker to decide on for new purchases in the past, paying them a trade commission. But now, brokers can’t, because yields have been too low and the regulation has become too onerous.

“So it’s less about SMAs versus mutual funds, and more about SMAs as the successor to the traditional transactional account,” Fabian said.