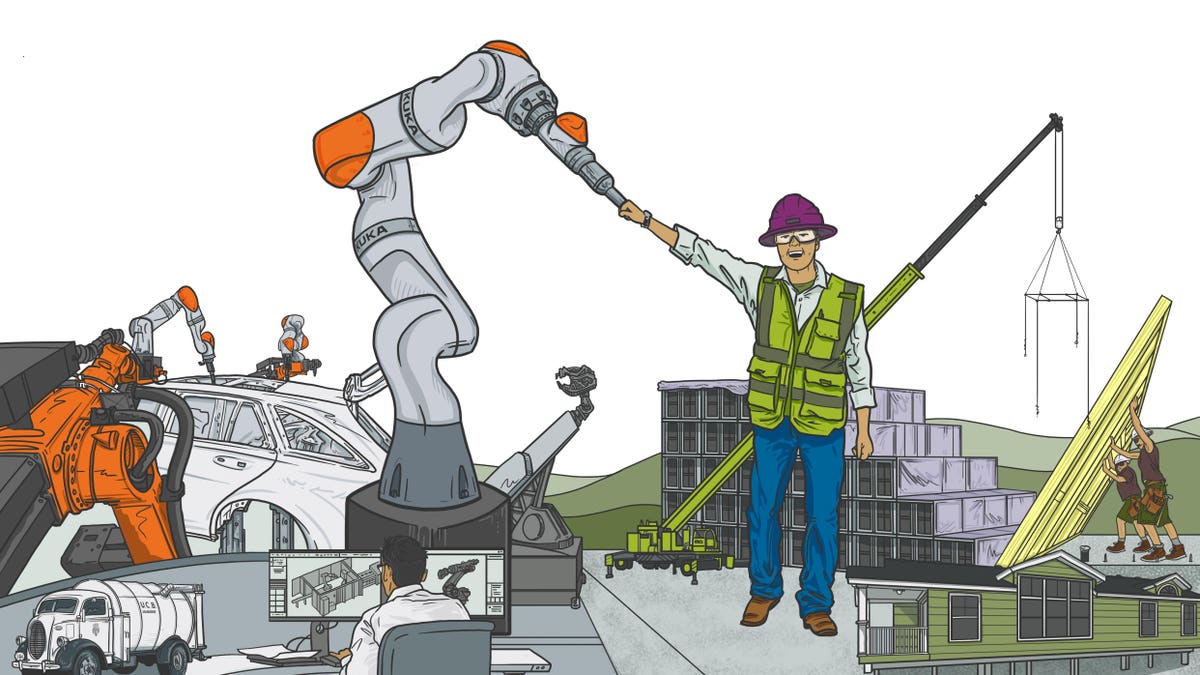 Cars are sophisticated, complicated precision machines with an average of 30,000 parts and an equally complex manufacturing process.

That number continues to increase, but even as cars become more sophisticated, there have been leaps and bounds in quality.

Not only is the quality improving, so is the speed to deliver new cars. A mass-produced car can go from concept to complete, ready to drive away, in a matter of hours. That means we have a lot more, much higher quality cars and can produce them with less human interaction, leaving humans to bring their experience, wisdom and knowledge to the research and development aspect that no artificial intelligence can achieve.

So, why are we talking about cars? Because over more than a century of manufacturing, the process has evolved. And, while there have been many attempts to manufacture housing as well, there haven’t been attempts that incorporate the experience, knowledge and machinery of car manufacturing.

According to the National Association of Home Builders, it’s really imprecise to quantify the parts and pieces in a home, but Rob Dietz, senior vice president and chief economist, says that one analysis outlines 51 product categories, which get messy really fast. Those 51 categories can be broken into hundreds of individual products or easily into thousands, quickly escalating into a fair comparison to the complex machinery of a car.

Once upon a time, someone told Henry Ford it couldn’t be done to manufacture a car, but he proved them wrong.

Today the launch of System P4, the first of its kind, predesigned housing factory system is here to demonstrate that it also can be done with housing. The four outfits that represent the P4 include everything a factory owner needs to get an off-the-shelf, automated modular housing operation up and running– people, products, preconstruction, and plants – designed by Waypaver, powered by KUKA technology, and backed by the P4 Housing Collective that includes Modular Maven, Effektiv House, Prefab Logic, and Waypaver.

“A car has a couple thousand components, and the configuration mode is nearly endless,” said Timo Heil, an expert in car manufacturing and CEO at KUKA Assembly and Test. “There is a lot more complexity in the technology and options, along with a tougher scale on tolerances. Housing is a great and complex business because you are selling a family dwelling. Now, we can use mass customization with the modern technology and software we have so that family dreams can be customized, high quality and delivered on time.”

When the four groups making up P4 started chatting in December 2021, the conversation had a focus on automation, but quickly became centered on people.

“At my age it was unbelievable to launch the first automated facility in the United States,” said Rick Murdock, the founder and CEO at Waypaver International, a Boise-based modular factory consultancy. “The people I met along the way were amazing. And, it’s all about people. Robotics and automation are great, but without the people to make it work, you have nothing. It’s not just promoting the automation, but the people who understand how it works and make it work well.”

The Modular Maven part of the group behind P4 bring the people focus with experience in developing happy company cultures where the people come first.

Curtis Fletcher, the head of Effektiv House, the off-the-shelf product plan portion of the group of four companies, said “It is one thing to open a plant, but to also create data and support the data is the challenge. You need to understand how to design, run and supply information as well as create the products – that’s the difficult part.”

Despite the challenges, Fletcher and Murdock worked together to do it, successfully opening a factory that has produced more than 1,200 housing modules since it began operating in 2020, and now they want to bring that experience to the industry at large, bringing these solutions to a larger scale.

“It’s not about getting rid of labor, it’s about widening the labor base,” Murdock said.

Recognizing the labor issues facing the country, the group believes that manufacturing housing will take the heavy lifting off of people and put it on machines, giving people a break to focus on more value-added responsibilities.

While automation does save labor, it does it in a rational way by reducing the labor content which also reduces the costs so that the end product is more affordable. The automation also provides a training ground for new people.

Hiel says that to realize a breakthrough will take a culture shift, which means taking the fear from automation.

“By delivering a turnkey plant and the automation equipment, we can train the existing industry to work with robots to transform the jobs,” he said.

For years and years, home building around the world has been done by hand, so there isn’t a lot of variation in processes, said Gerald Mies, the CEO at KUKA Systems. Plus, material and labor costs have been low, not driving a need for automation.

While the automotive industry consists of only a handful of huge companies worldwide, the housing industry is driven by thousands of small sized companies, which adds pressure from the cost and research and development side.

Mies points out that there was a tipping point globally in the last 10 years with housing demand that led to the need to build faster, improve quality, avoid environmental impacts, and reduce costs. One solution some of the industry is embracing is to follow the automotive industry and start automating.

“Everything that we own has been manufactured, so when I went to an automation show in 2018, I was looking at a bunch of robots and I thought if they can do that, we can apply it,” Murdock said. “The robot is the tool, but then you have to have the right programming. KUKA is a world leader with tremendous eye for detail and efficiency. I wanted to take that knowledge and translate to construction and building modules.”

Part of the automation means putting the construction process all together in one location, which is way more efficient than on multiple different construction sites. But, that’s not the only efficiency.

“In home building, the ratio of material costs to labor costs is 50:50,” Mies said. “In car manufacturing, the ratio is between 85:15 or even 90:10. That means that the labor costs are much smaller in an automated factory.”

The P4-KUKA team has copied the current methods of home building and translated it exactly into an automated process run by robotics. Since robots are now tasked with the work, Mies sees endless possibilities in the way that homes can be designed.

“With robots, we will gain efficiencies to use bigger and heavier parts,” he said. “Right now, a wooden sheet can only be as heavy as a person can lift, but a robot can lift parts up to a ton. So, this means that the whole process becomes more efficient because you can use other materials and you bring in new technologies. You don’t have to drill with a normal drilling machine, you can cut with a laser, or you can cut tiles with watershed cutting.”

While robots don’t care if they have metal or concrete, bricks or wood, to work with, they do demand accuracy. As Mies puts it, robots expect 100% precision. This is another massive benefit to automating housing construction. The product is much higher quality with much lower tolerances.

Not only is the process higher quality, but it’s smarter. With the digital design and process the Prefab Logic part of P4 has created, users now know everything that is in the wall, so if you want to hang a picture on the wall, then you know exactly what is behind the wall and where to do it because it’s all documented in a digital environment.

With all that being said, there is definitely a substantial capital investment. Those costs for the equipment will vary by Waypaver’s recommendations, but based on Murdock’s real-world experience of opening and operating a profitable automated housing factory, the payback is quick.

“You achieve a higher volume produced with fewer people,” Murdock said. “We know that, we have proven it. We will model off of the education that we got from doing the first automated plant.”

The collective behind System P4 wants to offer solutions to new entities interested in building new plants, where they could benefit from the data the team has accumulated as a start to finish from constructing to operating a plant. System P4’s service is offered to developers, municipalities, and modular builders that want to establish a steady stream of quality housing.

And, Back to People

Globally housing is at a tipping point where innovation is desperately needed to drive more supply at a more affordable price.

“Right now, housing is not affordable,” Murdock said. “Just look at the need and the quantity of the need. One plant is not going to make a dent. So, we need to go to a bigger scale because it’s a serious issue. We need to drive costs down and mass produce. Nothing would be better than to see automated modular manufacturing go up all over the country. It would be great to give back.”

So, his team really dug in to evaluate what could be changed with the processes that they put in place, highlighting the success along with the challenges to create the next generation of modular plants.

“In 2008, I made a decision to build a home and I’m now here in my home and talking to my employees who make a good salary and cannot afford to buy a home,” he said. “Even with two people working it’s not affordable. It is what concerns us and what we see on a daily basis. We have circumstances that are bad but not even as bad as California or Austin. So, when I brought the idea to [KUKA employees] of building a housing plant they were so excited about it.”

The group understands and is trying to solve for the fact that escalating new home prices are putting dreams out of reach for the average everyday person.

“It would be wonderful to change that, and I believe the only way to get there is through automation, robotics,” Murdock said. “We don’t want to franchise, we want them to get up on their own and self-produce.”

In talking to them, I felt like the group has the new selfless style of capitalism entering the global marketplace.