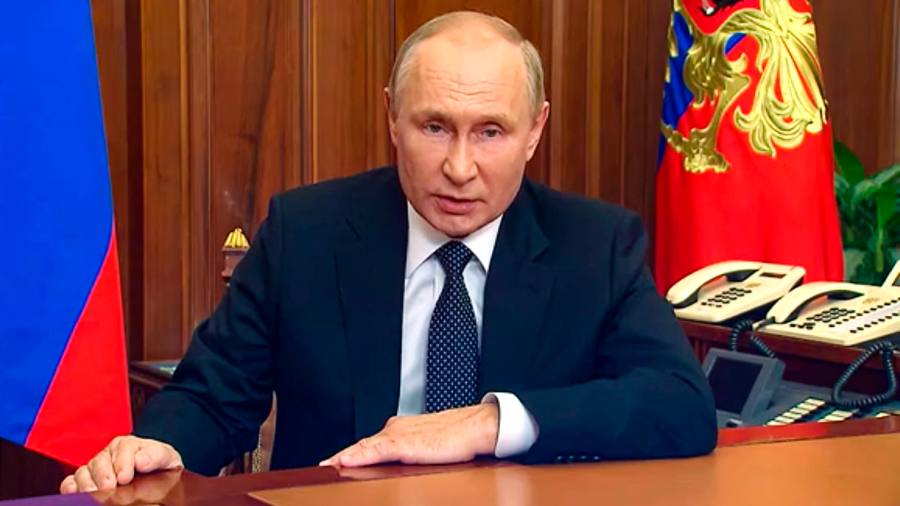 Vladimir Putin said Russia’s armed forces would call up its reserves immediately to support its invasion of Ukraine and indicated Moscow would probably annex large swaths of the country’s territory.

In an address to his nation that Nato also criticised for its “dangerous and reckless nuclear rhetoric”, the Russian president announced “partial mobilisation” ahead of heavily stage-managed votes in four occupied regions of Ukraine to join Russia.

Moscow did not give an official figure for the newly mobilised troops but it is estimated they will significantly bolster the number of Russian forces on the ground in Ukraine, which western officials have in the past estimated to stand at between 150,000 and 190,000.

More than six months since Putin first sent troops into Ukraine in late February, he defined the war as an existential struggle for Russia’s survival against what he described as a hostile west.

In his televised address on Wednesday, the president claimed such countries wanted to “weaken, divide and destroy Russia” and made a thinly veiled threat to use nuclear weapons if Ukraine continued its offensive operations.

He accused the west of using “nuclear blackmail” against his country and vowed: “If its territorial integrity is threatened Russia will use all the means at its disposal. This is not a bluff.”

Putin said Russia would “use all the means at our disposal to defend the country and the people” — raising the threat that the Kremlin would deploy nuclear weapons if was rebuffed.

“It’s not new as he has done it many times before. He knows very well that a nuclear war should never be fought and cannot be won, and it will have unprecedented consequences for Russia . . . He miscalculated, he made a big strategic mistake and that’s the reason why they now have to do this.”

Other western officials also depicted the rapid annexation plan and partial mobilisation of Russian society as a sign of Putin’s weakness. They added that allies that had provided billions of dollars of weapons to Ukraine to defend itself against Russia’s invasion would continue to do so as Kyiv sought to liberate more territory in the country’s east held by Russian forces at present.

“Sham referenda and mobilisation are signs of weakness, of Russian failure,” said Bridget Brink, the US ambassador to Ukraine, in response to Putin’s announcement. “The United States will never recognise Russia’s claim to purportedly annexed Ukrainian territory, and we will continue to stand with Ukraine for as long as it takes.”

Russian defence minister Sergei Shoigu, in a pre-recorded statement aired after Putin’s announcement, said Moscow would only call up reserves, rather than deploy the conscript army. This would add 300,000 people to Russia’s fighting force, he said.

Shoigu said these would be people who have previously served, have experience in combat and have some military specialisation that is needed by the armed forces. “These are not people who’ve never seen or heard anything about the army,” he said.

“Let me pre-empt questions. We’re not talking about the mobilisation of any students . . . They can calmly keep going to class,” Shoigu said. He claimed that after the reserves were called up, Russia would still have only used up 1 per cent of its mobilisation potential.

Andriy Yermak, Ukrainian president Volodymyr Zelenskyy’s chief of staff, posted a photograph from the battlefield on his Telegram channel after Putin delivered his speech. “We continue our work,” the post read.

Zelenskyy is scheduled to address the UN General Assembly via video link on Wednesday.

Russia appeared to acknowledge that advanced western weaponry such as the US-manufactured Himars rocket launcher system had begun to turn the tide on the battlefield.

“We are not at war with Ukraine, but with the collective west,” Shoigu said in a state television interview.

Russia’s invasion has badly faltered, with invading forces taking heavy casualties before retreating from central Ukraine in the spring and then ceding huge swaths of territory in the eastern Kharkiv region following a stunning Ukrainian counter-offensive this month.

Putin said Moscow would back votes to join Russia in the parts of Ukraine’s Donetsk, Luhansk, Kherson and Zaporizhzhia regions that are at present under its control. The votes are scheduled for this weekend.

The result of the “referendums” is effectively a foregone conclusion, with the Kremlin in charge of the vote and insisting more than 90 per cent of the local population wants to join Russia.

Russia does not control any of the regions in full, and many locals have fled to both Ukraine and Russia to escape the fighting.

Putin framed the decision as a move to protect Russian speakers in south-eastern Ukraine from Kyiv’s recent advances. “Russia can’t give up people close to her to be torn apart by executioners and fail to respond to their desire to determine their own fate,” he said.