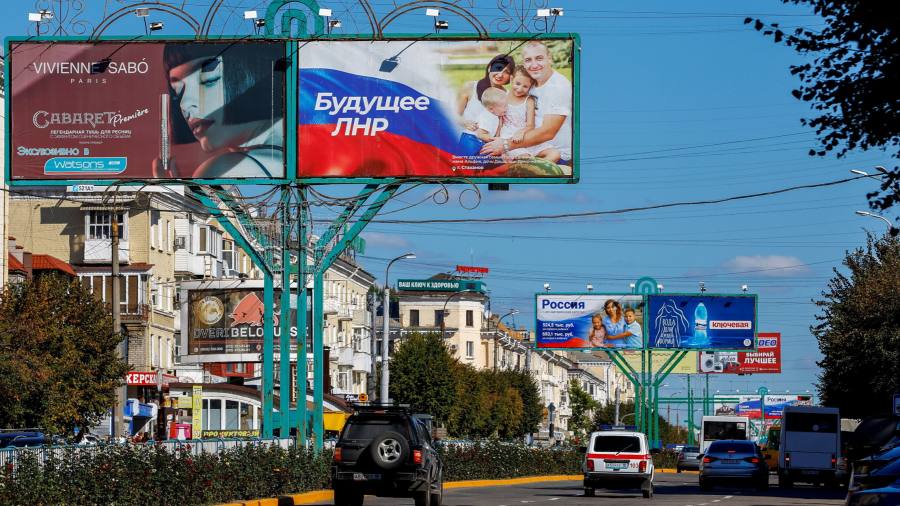 Four Moscow-controlled regions in Ukraine will stage referendums this week over becoming part of Russia, as the Kremlin tries to regain the initiative after major battlefield losses earlier this month.

In another sign of Moscow’s hardening stance, Russia’s Duma passed a law on Tuesday that would increase penalties for desertion in the event of a military mobilisation. Russia has still not declared an outright war.

Russian president Vladimir Putin’s administration has been on the back foot since losing thousands of square kilometres of territory to Ukrainian forces this month, increasing the clamour from pro-war hawks for a full-blown annexation and mobilisation.

Former president Dmitry Medvedev said that the votes were a “restoration of historical justice” and “will completely change the direction of Russia’s development for decades”.

Ukrainian officials have decried the referendums, which are due to take place across four regions from 23-27 September, as a sham.

They will be held on two territories — the Donetsk and Luhansk People’s Republics — that have been ruled as police states by Russian-backed strongmen since they broke away from Kyiv in 2014.

Votes will also be held in Kherson and parts of the Zaporizhzhia province, two southern regions that Russian forces seized as part of their full-blown invasion of Ukraine this year and where Moscow’s grip on power has remained shaky.

A senior EU official said that, if held, the proposed referendums would result in more sanctions being imposed on Russia and further isolation from the international community.

“This would be an illegal step and a continuation of the aggression against Ukrainian sovereignty and independence in violation of international law,” the senior EU official said.

“The referendums would lack any legitimacy and will not be recognised and the annexed territories will be further isolated by these actions, exposed to sanctions along with those involved,” the person added.

A referendum on joining Russia was held in Crimea in 2014 soon after key government buildings were seized by Russian troops. It was not internationally recognised.

“Russian propagandists think that ‘referendums’ are a panacea,” Mykhailo Podolyak, an adviser to the Ukrainian president, wrote on Twitter. “I have bad news. There is global consensus and international law.”

Russian media outlets reported that Putin was likely to speak on the referendums later on Tuesday.

Russian lawmakers on Tuesday also passed a bill that will criminalise desertion and other acts “during a period of martial law, armed conflict, or mobilisation”, a move that has raised concerns Moscow could soon declare outright war against Ukraine.

So far, Russia has termed its seven-month long invasion of Ukraine a “special military operation”, rather than a war. It has conducted its assault using contract soldiers and mercenaries, without officially deploying the conscript army or mobilising the wider population for war.

The bill, which passed its third reading in the Duma lower house of parliament on Tuesday, makes it possible for authorities to punish acts such as desertion if conducted during an ambiguous “wartime” or “mobilisation” period, rather than following a clear declaration of war.

Evading conscription and desertion will now carry a jail sentence of between five and 10 years. Similar sentences have been introduced for failing to comply with a commander’s orders, marauding and intentionally destroying military equipment.

The authors of the bill said these changes to the criminal code did not equate to mobilisation itself. “Mobilisation has not been announced,” the state Interfax news agency cited one person as saying.

“The Duma has just considered and adopted in their final form several changes to the criminal code at breakneck speed,” wrote high-profile lawyer Ivan Pavlov, who has previously defended Russian opposition leader Alexei Navalny. “Most likely, there will soon be a big announcement . . . [and] we will be able to call the war a war.”