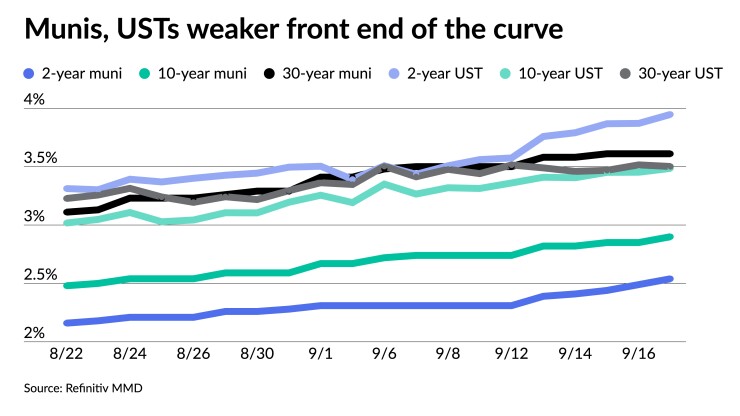 Municipals were weaker on the front end of the curve ahead outperforming larger losses on U.S. Treasuries that saw the two- and three-year yields rise to near 4% and the highest they’ve been since 2007.

“Anytime we get a big selloff in Treasuries, we tend to see munis follow Treasuries,” said John Mondillo, head of North America fixed income at abrdn.

The good news, he said, is munis, especially on the front end have outperformed USTs and corporate bonds.

“As an investor in the municipal bond market, at least over the past week, you’ve been insulated to some of that sell-off as a result of those [consumer price index] prints,” he said. “And following that CPI print, we’re now looking at a possibility of a 100 basis point move in Fed funds next week.”

“So another indication that economic data that we saw has investors a bit spooked and hence a bit of a selloff,” Mondillo said.

With the upcoming FOMC meeting this week, he said the market already has priced in a 75 or 100 basis point rate hike, especially on the front end.

“We’re probably more looking forward to the comments that come out post-meeting than the number itself,” he said.

Regardless of the 75 or 100 basis points rate hike, the question then becomes what will happen at the November and December meeting and what that means moving forward.

Two months ago the market had priced in a bit of a Fed pivot in early 2023, but there’s been a complete reversal over the last month and a half, Mondillo noted.

“The reality is that inflation remains high, and then we’ve got a Fed chairman and Federal Reserve that needs to get a handle on things,” he said.

“When market volatility is elevated, it increases the hedging costs for participants who calculate their hedging ratios based on their estimated value at risk,” CreditSights strategists said in a weekly report. “While investors may find the increases in yields to be attractive, we expect that dealers will continue to keep a low risk profile, diminishing liquidity, exacerbating volatility and pressuring new-issue spreads wider.”

Along with the overall weakness in the market, “the increased cost and complexity of hedging can result in an even greater reluctance for dealers to take on incremental risks in the secondary market,” they said. In the primary, they noted that “it can lead to wider spreads, especially when new-issue supply is heavy.”

This week, the new-issue supply is anything but heavy at about $1.4 billion, and the 30-day visible supply calendar sits at an estimated $8.5 billion. The “primary market calendar is very light as issuers appear to be waiting to borrow” until Fed Reserve Chairman Jerome Powell updates the market on the Fedʼs posture on inflation and rates, they said.

But even with the very light calendar, they anticipate “market weakness to persist this week, especially for bonds due in 15-years or more. Investors with money to put to work may see opportunities to pick up wider spreads and higher yields.”

For the remainder of the year, Mondillo expects to see some positives. So far, it’s been a less disappointing year for the asset class relative to other fixed-income asset classes, USTs and corporates.

“Munis have outperformed, which is nice to see, but certainly we’re not used to seeing this level of negative total return within the municipal asset class,” he said.

But, he believes “the worst is behind us in terms of rate moves, credit spread widening. Municipal fundamentals still remain strong in our view.”

Despite this, things could remain choppy, at least throughout the remainder of this year.

“But we are going continue to see inflationary prints that are sticky and above expectations, and the Fed continues to hike rates, again to try to curb inflation,” Mondillo said. “You could continue to see interest rates pushing up in line with where Treasury rates would likely go and that would spell negative returns for munis.”

Treasuries were weaker 10 years and in.

Competitive:
The Board of Water Works of the Louisville/Jefferson County Metro Government, Kentucky, is set to sell $128.660 million of water system revenue and refunding revenue bonds, Series 2022, at 10 a.m. eastern Thursday.

Why is the crypto market down today?
Why India ETFs Are Soaring
Stocks making the biggest moves midday: Wynn Resorts, Planet Fitness, AMC, Lyft and more
Illinois makes sales pitch for its paper ahead of $700 million deal
How 2022 volatility is shifting muni ownership