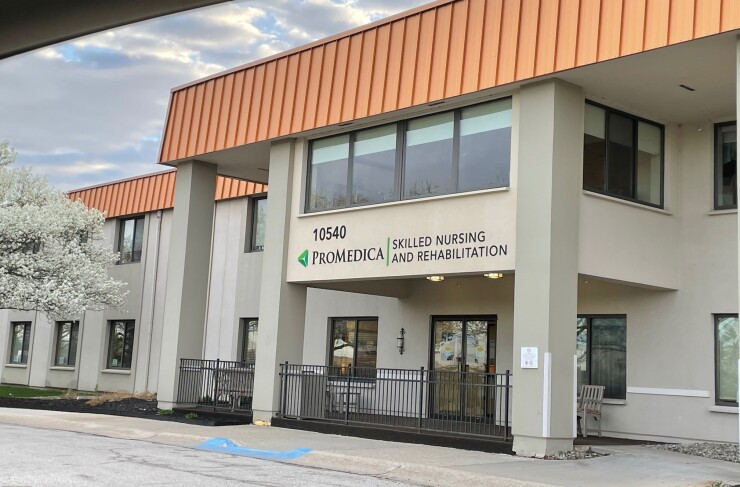 Moody’s dropped the rating two notches to Ba2 from Baa3 Monday and warned of further deterioration by leaving the system “under review for further downgrade.” The system has $2.3 billion of bonds and capital leases and $2.6 billion in operating lease obligations.

The downgrade “reflects material cash-flow losses this year, which exceeded Moody’s prior expectations, a significant drain of liquidity even with one-time cash infusions, and narrowing headroom to quarterly bank covenants,” Moody’s said. “In addition to severe losses in the nursing home and assisted living business, the provider business will need to reverse the year-to-date cash-flow loss following solid margins in fiscal 2021.”

Both operations face pressures from high labor costs and capacity constraints. The challenges are partly offset by the system’s cash position of $1.4 billion and the potential value of other assets.

The S&P downgrade triggered a covenant violation and a non-payment related default under 2018 standby letters of credit that would allow the financial institutions to accelerate all of the obligations, but the system reported in a Sept. 9 filing it has received some breathing room.

The system entered into a limited waiver and first amendment to its continuing agreement on the standby letters of credit effective Sept. 8 “which waives the ratings covenant default and any other default or event of default under the continuing agreement occurring prior to the effective date of the amendment as a result of the ratings covenant default,” according to the notice posted on the Municipal Securities Rulemaking Board’s EMMA website.

It also amends the continuing agreement to remove the event of default if either S&P or Moody’s “downgrade their ratings on any long-term unenhanced debt evidenced or secured by a ProMedica Master Indenture obligation,” the notice reads.

As part of the amendment agreement, ProMedica agreed to deposit $36.2 million with the letter of credit bank as collateral. ProMedica Obligated Group had previously deposited $72.6 million as collateral.

The system’s ratings have been sinking since before the pandemic, but it has since made changes at the top and is working with a turnaround consultant.

“While credit rating downgrades are certainly disappointing, we are keeping our focus on efforts that help position ProMedica for long-term financial stability and success,” ProMedica spokeswoman Tausha Moore said in a statement.

Moore also pointed to the industry-wide struggles, citing reports that underscore the rising pressures on hospitals that have dragged down operating margins.

An analysis prepared by Kaufman Hall and released by the American Hospital Association this week warns that the spike in COVID-19 cases early this year, the nursing and other labor shortages, and rising supply costs will drag margins down 37% compared to pre-pandemic levels making it the most difficult year since 2020.

“While federal support and relief has tapered off, the fight against COVID hasn’t. Managing the aftermath of the pandemic has placed the vast majority of America’s hospitals in serious financial jeopardy as they experience severe workforce shortages, broken supply chains, the Medicare 2% sequester kicking back in and rapid inflation that has increased the cost of caring,” Rick Pollack, president of the American Hospital Association, said.

Moody’s said its watching for the final details of ProMedica plans crafted with a restructuring firm and will gage the impact on cash and the related implications for meeting quarterly covenant requirements under bank agreements.

ProMedicafaced downgrades in 2018 after taking on more than a billion dollars in debt for a large-scale play into the skilled nursing space through the acquisition of HCR ManorCare. Insurance losses drove more rating cuts before the COVID pandemic led to financial stress at its hospitals and even more in its senior-focused skilled nursing division.