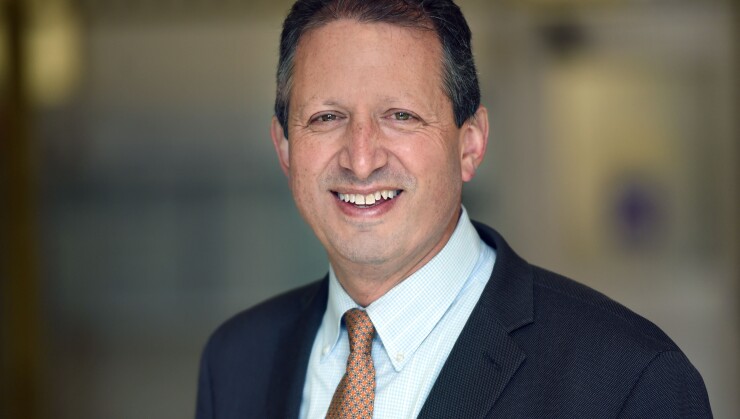 New York City could use municipal bonds as a way to finance better outcomes for migrants coming to New York from Ukraine and the southern border, city Comptroller Brad Lander said.

Asylum seekers coming to the Big Apple could benefit from a new economic initiative tied into an inclusive strategy, Lander said during a webinar hosted by the Association for a Better New York.

While the recent actions by Texas Gov. Greg Abbott and Florida Gov. Ron DeSantis to send undocumented migrants to New York City were “horrid,” Lander said, it provided an opportunity for the city.

“Growth in immigration is what saved the city coming out of the fiscal crisis,” Lander said. “We’re lucky to have these folks coming. They want to work so let’s push the federal government, as the mayor is doing, to get them work authorization — let’s think about how to help those folks get into good jobs as quickly as they can — whether they’re coming from Venezuela or coming from Ukraine.”

He lauded the federal government’s Infrastructure Investment and Jobs Act.

“If we could use the infrastructure money to start more construction projects, to install more solar panels on tops of buildings — those are great jobs for people to get,” he said.

All of this will have to be a partnership between the public, private and non-profits sectors, he added.

“I’ll use this Solar NYC program which are pitching as a model,” he said. “What we want to do is use city capital dollars, municipal debt, to finance city-built rooftop solar installations. “And while the city will pay to have the panels installed, the work won’t be done by city employees,” he said.

Since the city is paying, Lander said, it can tell installers, “You need to hire people through the set of programs that Green City Forest and Solar One and St. Nicks [Alliance] are running that can give a pathway to people in public housing to those jobs.”

And it could be done “without a meaningful infusion of city expense dollars at all — if we can use city capital as infrastructure, we could own the rooftop solar panels even if they’re on private homes and buildings and create a ton of good jobs and these jobs would be perfect for folks coming from Venezuela or folks coming from Ukraine or kids coming out of high school in low-income neighborhoods,” he said.

“The future of New York City is far more robust, far rosier than we in those very dark moments fear,” Lander said. “That’s not to deny the challenges … But as of July we have regained 96% of the private sector jobs that we had before the pandemic and while some important sectors like leisure and hospitality have been slow to recover and are still down, other critical ones, like tech and healthcare, are well above pre-pandemic levels.”

Earlier this month, Lander told the New York State Financial Control Board that during a time of economic uncertainty and mixed data signals, the city is facing record high inflation, stock market volatility and rising interest rates. He urged an additional deposit of $800 million into its Revenue Stabilization Fund from excess revenues in the last fiscal year.

New York City is one of the biggest issuers of municipal bonds in the nation. As of the first quarter of fiscal 2022, the city had about $38.13 billion of general obligation bonds outstanding.

The city’s GO bonds are rated Aa2 by Moody’s Investors Service, AA by S&P Global Ratings, AA-minus by Fitch Ratings and AA-plus by Kroll Bond Rating Agency. Fitch assigns a positive outlook to the city while Moody’s S&P and Kroll assign stable outlooks to the credit.

The city’s fiscal 2023 budget of $101 billion was adopted in June. According to an analysis by Lander’s office, the fiscal 2023 budget is $10.44 billion less than in fiscal 2022, driven by a reduction in COVID assistance from federal relief measures.

On Monday, Lander released a report showing the city collected $869 million in commercial rent tax (CRT), in fiscal 2022, unchanged from the same period in fiscal 2021, but 4% below the peak of $907 million in fiscal 2019. The CRT is levied on commercial tenants in Manhattan south of 96th Street, who pay more than $250,000 in annual rent.

“The decline in CRT from 2019 is unusual and did not occur in previous recessions because higher commercial vacancies were offset by higher rents on new and renewed leases,” the report said. “As the city’s central business district suffers from reduced economic activity, CRT revenues remain subdued despite the ongoing economic recovery.

Sales tax collections of $6.2 billion in the city year-to-date were up 25% year-over-year, according to state data, the largest increase among municipalities in the state.

“The divergence between rising international travel and flat hotel demand is likely explained by a rise in outbound international travel,” the report said, “with the increase in international passengers due more to Americans taking advantage of the strong dollar to take trips that were not possible during COVID restrictions, rather than to a strong increase of international visitors to NYC.”

He was mostly optimistic about the city going forward.

“Even as we see this shift into hybrid work and the challenges of rising inflation and a likely economic downturn amid expiring stimulus, there’s real reason to believe that New York City remains a place where people want to be and if we make the right investments we can keep it that way,” Lander told ABNY.