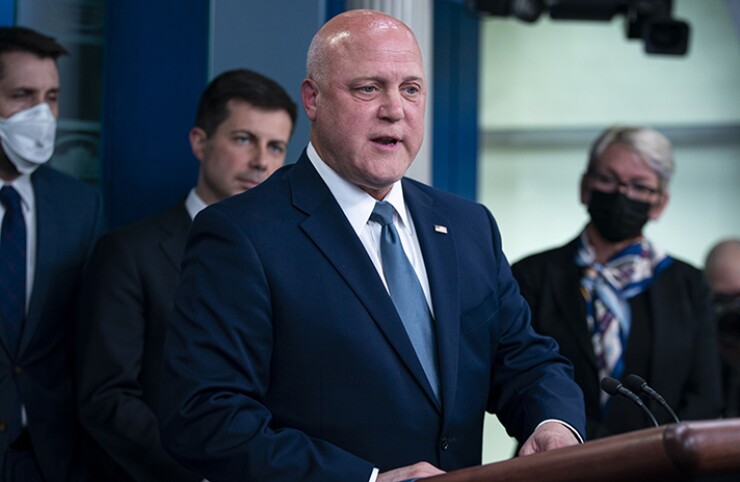 Detroit, Chicago and San Diego are among the 26 cities and states that won federal dollars for projects that will improve the movement of freight across the country.

The 26 awards — for infrastructure in 22 states and Puerto Rico — prioritized projects that also addressed issues like equity, inclusion and resiliency. About 43% of the awards will go to rural projects, said White House Senior Advisor Mitch Landrieu in a call with reporters Wednesday.

“These projects are happening in every corner in the country and they’re going to drive sweeping change,” Landrieu said.

The Bipartisan Infrastructure Law boosted INFRA’s funding by 50% to provide nearly $8 billion through 2026. “This is just year one, so we’re just getting started,” Landrieu said.

The U.S. DOT received more than 250 applications totaling $26.5 billion, said Christopher Coes, assistant secretary for transportation policy. The applicants that didn’t win money this round may receive funding from other programs, as the INFRA application this year for the first time was combined with two other programs. The White House will also offer technical assistance to help improve applications, Coes said.

“We just don’t have enough money to fund a lot of the amazing projects we have,” he said. “Our team and DOT will be conducting debriefs with each of the applicants and providing direct technical assistance on how to make it more competitive going forward.”

San Diego’s Otay Mesa East Port of Entry won $150 million to build a toll road and port of entry facility to “provide an alternative for nearly 3,600 trucks that cross the existing Otay Mesa and Tecate Ports of Entry daily” and facilitate freight movement across borders.

The Illinois Department of Transportation won $70 million for a project to rehab, remove or replace elevated tracks and viaducts along a 100-year-old freight rail corridor along a main avenue in Chicago to allow for faster train speeds. Coes noted the application showed “a level of collaboration with the unions and surrounding communities” and is a “project of national significance as it has a direct connection to our supply chain abilities.”

The Michigan DOT won $105 million for a high-profile project in Detroit that will redesign the ramps and freeway near I-375 to help reconnect neighborhoods that were divided decades ago by the current highway design. Transportation Secretary Pete Buttigieg will be at Detroit’s auto show Thursday with Gov. Gretchen Whitmer to tout the project.