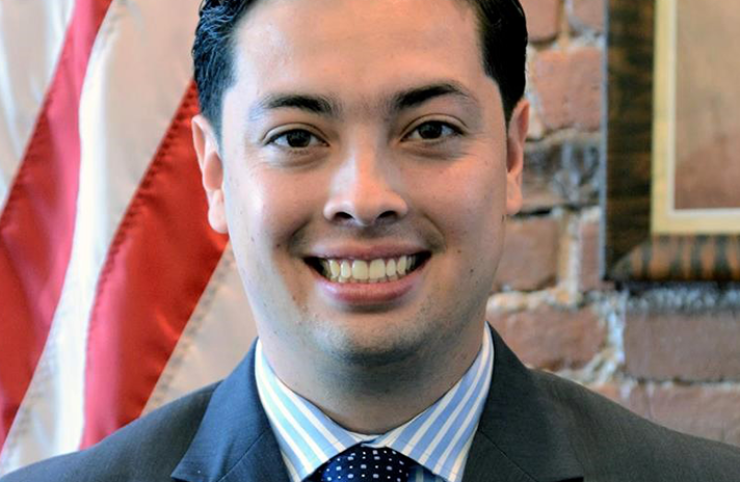 He bested Stefan Pryor, former Rhode Island commerce secretary with 55% of the vote, according to results from the local election office.

Diossa’s campaign has yet to release a formal statement, but the candidate acknowledged his victory late Tuesday night in a post on Twitter after results were certified.

“Thank you Rhode Island and I am honored to be the Democratic nominee for Treasurer,” he Tweeted.

Before his run for treasurer, Diossa was mayor of Central Falls for two terms, taking over amid a financial and political scandal that saw the 19,000-strong town become the first in Rhode Island’s history to file for bankruptcy protection.

The decline of Central Fall’s textile industry, once a pillar of the town’s economy and primary employer, had been decades in the making but was accelerated by the 2008 financial crisis, leading to a rash of layoffs and factory closures that hollowed out the city’s already flailing tax base.

Diossa’s predecessor, Mayor Charles Moreau had the city file for bankruptcy protection in 2011, leading to an unprecedented state takeover to negotiate a restructuring of the city’s finances — in particular, its overleveraged pension fund. By then, the city held $80 million in unfunded pension debt while bringing in just $16 million in annual revenue.

However, amid negotiations Moreau pleaded guilty to federal fraud charges related to a contracting scheme that took advantage of the high rate of foreclosures in Central Falls, prompting a special election in 2012 in which Diossa won. He was just 27 years old.

“We stabilized the city’s finances, raised its long-term bond rating to investment grade, and secured millions of dollars in federal, foundation, and private sector funding to improve the city’s infrastructure and quality of life,” he said in a blog post on his campaign website.

Diossa addressed the massive pension burden by enrolling the city’s municipal pensioners into the state’s Municipal Employees Retirement System, which brought with it cuts of 25% to enrollee payments, but helped turn the city’s finances around.

Diossa campaigned on his success with the Central Falls pension system and made addressing the long-term health of the state’s $10 billion state retirement system a central tenet of his platform.

“After years of fiscal irresponsibility, my city faced $80 million in unfunded pension debt with only $16 million in annual revenue,” he said in a statement posted to his campaign website. “By heeding the advice of experts, and with sound fiscal management, I made meaningful progress toward full economic recovery.”

Rhode Island’s GOs are rated AA with stable outlook by both S&P Global and Fitch.

The state has had a relatively strong economic recovery from COVID-19 lockdowns, according to a report from the Office of the Treasureyy and is set to receive around $1.8 billion in infrastructure funds from the federal Infrastructure and Jobs Act.

Lantrop may be in for an uphill battle in the historically Blue state. He is campaigning on a more fiscally conservative approach to pension funding as well as expanding transparency around how those funds are being invested.

“Public scrutiny ensures accountability. Restoring transparency is one of the main reasons I decided to run for office. It’s time to bring professional leadership back to the Treasurer’s office,” he said.

Rhode Island’s treasurer is responsible for the issuance and management of all public debt in the state.

Outgoing Treasurer Seth Magaziner won the Democratic primary in his bid for the nomination for one the state’s two open U.S. House seats. Under Magaziner, the municipal market saw some of Rhode Island’s largest bond offerings to date, including a $400 million package of mixed-use credit approved by voters in a referendum last year, as required by state law for all of the state’s municipal offerings.

Magaziner also supported a $515 million municipal bond sale to help Providence’s public pension system, which was approved in a special referendum in July.

On the primary campaign trail, Diossa also supported both measures while Lantrop opposed them.

The November ballot will include another referendum for $250 million in construction bonds meant to finance the renovation of public schools across the state.

Diossa supports the new bond referendum, calling it in a statement “a once in a lifetime investment” and said he’d help ensure its passage by “actively campaign in support of this proposal as I speak with Rhode Islanders around the state.”

Lanthrop opposes the spending, according to his campaign website.