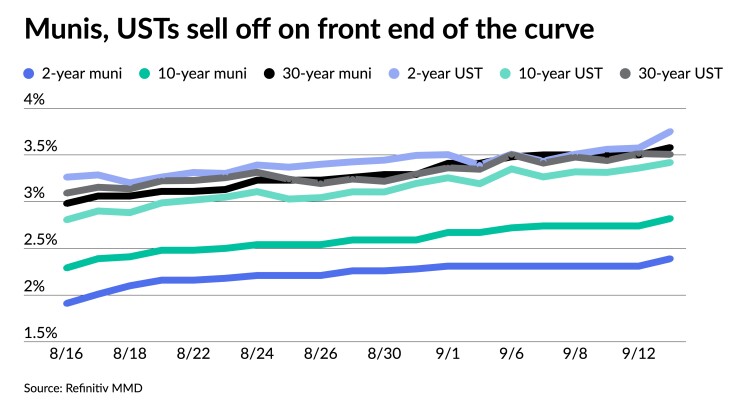 Municipals saw losses across the yield curve, outperforming a U.S. Treasury selloff on the front end of the curve but facing larger losses out long, while equities tumbled following a hotter-than-expected inflation report.

Muni and UST yields surged Tuesday on expectations the Fed will have to aggressively raise interest rates to bring down inflation, said Scott Anderson, chief economist at Bank of the West.

Triple-A benchmarks were cut six to eight basis points, depending on the scale, while UST yields rose five to 18 basis points 10 years and in.

“This was last big piece of economic data on the way before the Fed meets next week to decide its next interest-rate move,” said Jan Szilagyi, CEO and co-founder of Toggle AI, said of August’s consumer price index report.

This has led many observers to believe the Fed will take a more hawkish stance on rate hikes.

“The July respite of decelerating price pressures appears to be short-lived and will place further pressure on the Fed to raise rates 75 bps in September, but also beyond,” said George Catrambone, head of Americas trading at DWS. “This could lead to terminal rate of interest higher (and for longer) than investors were expecting.”

There have been six consecutive weeks of rising tax-exempt yields, with triple-A benchmarks cheapening three to eight basis points last week and the curves “ending steeper despite another imminent Fed rate hike next week,” said Matt Fabian, a partner at Municipal Market Analytics.

“We have not seen such robust yields for more than a decade,” said Nuveen strategists Anders S. Persson and John V. Miller.

“Many investors appear to want to lock in long yields, as they think yields will be lower in 2023,” they noted.

“That cautionary signal from USTs, along with upward pressure on short and intermediate yields following the Fed, is enough to worry municipal investors away from longer purchases despite endemic product scarcity, mostly oversold valuations, and nominal yields re-hitting classic entry points,” Fabian said.

Instead, he noted, “reinvestment and any other cash is sliding, as usual, into short-term/holding allocations.” The SIFMA seven-day index has rallied 44 basis points since the middle of August and $5.9 billion of dealer variable rate demand obligation inventories in late July have tapered to just $300 million.

Investors, though, do not appear to be using the muni exchange-traded funds as cash alternatives again, as they did throughout most of the pandemic, Fabian said.

“ETF net creations have been flat to negative since [Aug. 1],” he said. “This may mean a less noisy market if prices drop suddenly again.

Conversely, traditional fund flows “have not been a comfort, sawing back and forth between inflows and outflows since the start of 3Q and keeping underwriters and the primary market concessionary,” Fabian said.

But despite negative fund flows, Persson and Miller said, munis are seeing strong demand as ”individual investors are looking to lock in attractive tax-exempt yields on individual bonds.” They expect this trend to continue.

“The new-issue calendar should continue to be outsized and priced to sell,” they said. “Institutional investors should also continue to show strong demand for tax-exempt bonds as they rebalance portfolios back to stated mandates.”

Since “outflows now appear to be subsiding … the market ended the week with new found firmness,” they said. “High yield outperformed high grades, and credit spreads tightened,” they noted.

But muni-USTs ratios widened to more than 100%, impacting all muni valuations. The high-yield muni credit spread curve is inverted by more than 50 basis points. This week brings more supply after a light calendar last week.

Treasuries sold off on the front of the curve.

CPI comes in hotter-than-expected once more
The consumer price index rose 8.3% year-over-year in August, a slight slowdown from 8.5% in July, but still well above the Federal Reserve’s 2% target, and higher than economists predicted.

The consumer price index increased 0.1% in August month-over-month, but the “modest gain for the headline index masked what was a disappointing report,” said Wells Fargo Securities Senior Economist Sarah House and Economist Michael Pugliese. “There remains considerable ground to cover before getting inflation back to a pace that resembles the Fed’s target,” they noted.

In the latest three reports, the core number grew at a 6.5% annualized pace, they said, “more than triple the 2% target,” a level that”remains even more distant at present.”

“The tight labor market has kept compensation, the largest cost for most businesses, advancing well above 2% (even after accounting for productivity growth), while consumer and business inflation expectations remain high relative to the range of recent decades,” they said.

August’s CPI report has reinforced market participants’ belief that the Fed will implement a 75 basis point hike at its September Federal Open Market Committee meeting, with some suggesting a full-point hike could be on the table.

“While some in the market may speculate about a 100 bps increase, I do not believe the Fed will choose to do that, preferring instead to emphasize that they won’t slow the pace of hikes until there is some moderation in inflation,” said Eric Winograd, senior economist at Alliance Bernstein. “Clearly that hasn’t happened yet, and that means that additional large increases (50 or 75 bps) remain likely in the months to come.”

“The report is unlikely to change much for the near-term Fed policy path as Fed communications last week clearly set the pace” for 75 basis points for this month’s FOMC meeting, said Morgan Stanley analysts. But the report may make it more difficult for the Fed to step down in the pace of tightening, they said, although they still see a 50 bp hike in November.

Bank of the West’s Andersonnoted the fed funds futures see a 100% chance of a 75-basis-point hike this month and a 58% chance for another 75 basis point hike at the November meeting.

All of this taken together means the Fed “needs to signal at least getting to 4% by the end of the year,” according to Marvin Loh, senior macro strategist at State Street Global Markets. “More hot CPI and labor prints in the coming months will push these expectations even higher. We expect that the Fed will signal a 4.25-4.5% terminal rate when it updates its dots next week.”

“Fixed income markets are pricing rates to reach almost 4% by the end of the year, up from the current target of 2.25% to 2.5%,” said Toggle AI’s Szilagyi. “This is substantially higher than even a month ago when they expected rates to rise to 3.5% by” yearend.

“The hotter than expected report means we will get continued pressure from Fed policy via rate hikes,” said Matt Peron, director of research at Janus Henderson Investors. “It also pushes back any ‘Fed pivot’ that the markets were hopeful for in the near term.”

Munis steady, UST yields rise after GDP report
Biden administration rolls out a blueprint for a ‘renters bill of rights’ – Here’s what it includes
5 Top Non-Tech Earnings Charts
What is a ‘rolling recession’ and how does it affect consumers? Economic experts explain
A Luxury Lodge Beckons Along The Unspoiled New Zealand Coastline