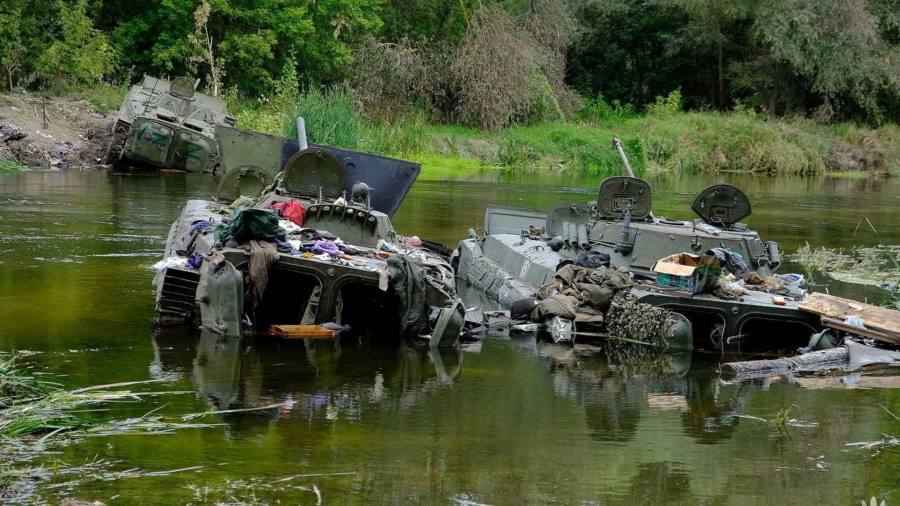 Ukraine needs to secure the vast territory it has recaptured from possible Russian counter-attack, the country’s defence minister has warned, as he said Kyiv’s lightning offensive had gone far “better than expected”.

The attack has routed the Kremlin’s forces, led to the recapture of some 3,000 sq km of Ukrainian territory and prompted an unusual admission by Russia’s defence ministry that its troops had to retreat.

“A counter-offensive liberates territory and after that you have to control it and be ready to defend it,” defence minister Oleksii Reznikov told the Financial Times, while cautioning: “Of course, we have to be worried, this war has worried us for years.”

On Sunday night Russia lashed out against Ulkraine with artillery and missile strikes launched from the Black Sea.

In Kharkiv, the night sky lit up following a strike on the country’s second-largest thermal power plant, causing a total blackout. A total blackout also hit the Donetsk region, while Zaporizhzhia, Dnipropetrovsk and Sumy experienced partial ones.

The Russian forces are “terrorists and remain terrorists and attack critical infrastructure. No military facilities, the goal is to deprive people of light and heat,” President Volodmyr Zelensky tweeted.

Russia’s most vocal pro-war commentators celebrated civilian areas being left without power: “Hey neighbours, what’s up with the light?” Russia Today’s editor Margarita Simonyan taunted. However, late on Sunday, Kyrylo Tymoshenko, a senior Ukraine official, said power had been returned to some regions.

In the same speech the president also hailed the ‘liberation’ of the three towns of Balakliia, Izyum and Kupyansk.

The Ukrainian blitzkrieg — which Reznikov described as a “snowball rolling down a hill” — is the biggest setback so far for Russia since the full-scale invasion that its president Vladimir Putin ordered on February 24.

Ramzan Kadyrov, the strongman leader of Chechnya, which has supported Moscow by sending troops, criticised Russia’s military for the retreat and said if their strategy did not change, he would speak to the “leadership of the country”.

“Mistakes were made. I think they’ll draw conclusions. It might not be nice when you tell someone the truth to their face, but I like telling the truth,” he said.

The latest Ukrainian offensive marks a success along the northernmost of the three active front lines in the conflict and Kyiv’s forces continued to press home the advantage on Sunday. General Valerii Zaluzhnyi, commander of the armed forces, said they were just 50km from the Russian border. Photographs he posted on Telegram showed military positions that Russian troops had abandoned in such a hurry that meals were left set out on wooden tables.

“The Armed Forces of Ukraine continue to liberate territories occupied by Russia,” Zaluzhnyi wrote. “Since the beginning of September, more than 3,000 sq km have been returned.”

“Massive de-occupation is on the horizon,” Hayday said on Ukrainian television on Sunday. “Maybe this [victory] will not be in a day or two, but it will happen soon . . . We can say that their morale is shattered.”

Reznikov said Ukrainian troops were tired after the six-day attack but morale was high because “it’s a sign that Russia can be defeated”.

He cautioned that Russian reinforcements could launch a counter-attack on his country’s stretched supply lines. Ukrainian forces could also be encircled by fresh Russian troops if they advance too far.

Annalena Baerbock, Germany’s foreign minister, said the Ukrainian advance was a moment of hope. “This is what we need,” she said speaking on a visit to Kyiv.

Russia’s defence ministry acknowledged on Saturday that its forces had pulled back from the strategic city of Izyum, claiming it had decided to “regroup” and transfer them south-east to the Donetsk region

Ukrainian troops had encircled Kupyansk, north of Izyum, a road and rail hub that supplies Russia’s defences across north-eastern Ukraine. This left thousands of Russian troops cut off from supplies across a stretch of fiercely contested battleground.

The liberation of Izyum “would be the most significant Ukrainian military achievement since winning the battle of Kyiv in March,” analysts at the US-based Institute for the Study of War said. They expected Ukrainian forces to “capture the city of Izyum itself in the next 48 hours if they have not already done so”.

Officials and military analysts cautioned the offensive’s success did not mean that Ukrainian troops were about to roll back Russian forces to the border.

Reznikov said the nearly simultaneous counter-offensive around Kherson was making slower progress because it was an agricultural region “with irrigation channels” the Russians could use as defensive trenches.

Casualties there have reportedly been heavy and Ukraine’s general staff said 1,200 Chechen soldiers had been deployed to reinforce Russian positions.

Reznikov said the Chechens were being used to stop frontline troops from deserting their positions.

“The news from the ministry of defence about retreating will spread quickly,” said Dara Massicot, a Russia military expert at the Rand Corporation, a US think-tank. “Moscow should not underestimate how quickly bad news, panic and rumours can cascade along the front — especially given the force exhaustion that comes from months of fighting, a lack of reserves and rest.”